When I want to be sweet and light like a blackberry

floating in a bowl of water, instead I am heavy

and awkward. When I want to be strong like a real

sword, instead I just sit here like a blackberry in a bowl

of yogurt. Once, I saw a suit of new skin floating

right in front of me. It was perfect. Just my size.

for the morning. It was perfect. All I had to do

New York City resident and Canadian expat Mikko Harvey’s first poetry collection is Unstable Neighbourhood Rabbit (Anansi, 2018), a collection of odd lyrics, narratives and fables, as he described recently to Zach Herrod in an interview posted at The Arkansas International:

Maybe a good way to answer the question would be to offer you facts. I wrote the poems in Unstable Neighbourhood Rabbit between 2012 and 2017. Most were written in Columbus, Ohio. Several started out as messages spoken into a voice recorder. I spent a lot of time walking down sidewalks pretending to be on the phone but actually muttering lines to myself. One poem was written on an airplane. Several of the poems act like short stories, or fables, and they would begin with a premise: if a bomb and a raindrop could talk to each other as they fell, what would they say? If anxious children were taught to strangle rabbits to treat their anxiety, what would that world look like? This rabbit question turned into the title poem. I’m not sure where the question came from—probably simply from my own anxiety, love of animals, fear of hurting what I love, etc. My subconscious is always rearranging these primal forces and offering them back to me in the form of weird little narrative conceits. Thank you, subconscious. At least two poems were written while playing basketball. 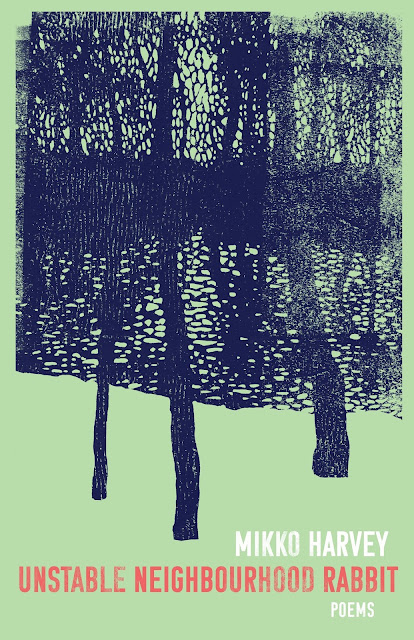 The lyrics in Harvey’s Unstable Neighbourhood Rabbit unfold and unfurl to reveal succeeding layers of narrative oddities, such as the poem “THIRD DATE,” that opens: “We watched a yellow butterfly bounce, bounce, / then get annihilated by a truck, which cast a wing-sized shadow / over our trip to the state park. It was there, under the sugar / maple canopy, darling, that I learned of your hypoglycemia.” Where does a poem go from there? There are those say that the best thing a poem can do is to explore the already-familiar in an entirely new way, providing a fresh perspective that allows the reader to experience the world with new eyes, and this appears to be what Mikko Harvey brings to the lyric, offering the surreal through a rather straightforward narrative, one that twists and turns even as it holds entirely still, offering a line solid enough that any bird would trust to land upon it. Through Harvey, there is a comfort to the narrative uncertainty, one that reveals an array of surreal experiences and stories, both light and dark, that become entirely familiar, and work to twist expectation, but never unsettle.

I was born in a place where all the people were clean,
where Joanie had no trouble falling asleep,
where Frank was allowed to pay for breakfast
using seashells he’d collected, where ten lizards
arranged themselves in a circle for no clear reason,
where nobody’s wrists were too thin,
and when the man underthe stars with a knife in his pants
examined his reflection in the lake and asked
Is this the night? Is this the night I finally sing?
his reflection replied No, no, not tonight.
So the man curled up in a ball and fell asleep
and dreamt of a place where all the people were dirty,
so dirty, they began to believe they were clean.