Minola Review: A Journal of Women’s Writing, an anthology edited by Robin Richardson

Doubt is dead, yet evil is out bedeviling the bars of this country, bearded and growing fat with paranoia. I slept beside it for all those years, woke and made the sweat-wet bed each morning. My project is atonement. Come inside me while I bleed and let our humours runnel my legs and let that be like raising a daughter together. I anoint myself twice a day. You angels, please bed for me in your hall. The fires of purification melt iron that beads from my pores. I have lied to every one of you, in small ways and large. I have used every detail for my own purposes. Yes, I have walked into unlocked rooms and executed the men who waited for me there. I have soothed evil in its night terrors. I abase myself. I beg you. Lead pours from my mouth. My project is reconciliation. (Paige Cooper, “VAZOVA ON LOVE”)

In the introduction to Minola Review: A Journal of Women’s Writing, a newly-released print anthology compiled as a ‘best-of’ her online journal, editor/publisher Robin Richardson speaks of the need for a separate space in which to work and present work, one that doesn’t come with experiences such as, she recounts, being shamed for dancing at a dance party at thirteen. As she writes: “What if I could create a space where my girlfriends and I could dance however we want? Where we wouldn’t worry about coming across too sexy or too unsexy, too goofy or unhinged. We could have the freedom simply to move.” Using an argument similar to those made for Vancouver’s Room Magazine from the anthology Making Room: Forty Years of Room Magazine (Caitlin Press, 2017) [see my review of such here], Richardson continues:

Minola Review is my no-boys-allowed dance party. I created Minola—named after the shrew who is arguably broken, or perhaps forced to play at being broken for the sake of survival, at the hands of her father and husband in Taming of the Shrew—as an online magazine for writing by women, femme-identifying, and non-binary writers. In the past few years, the realities of gender disparity in literature, and in North American culture at large, have come to the forefront. Groups like VIDA: Women in Literary Arts and CWILA (Canadian Women in the Literary Arts) have worked to calculate and share the numbers regarding men and women in print and review. Both organizations have made one thing clear: men maintain a majority in almost all arenas. There are more male editors and reviewers, and more books by men being published and reviewed. 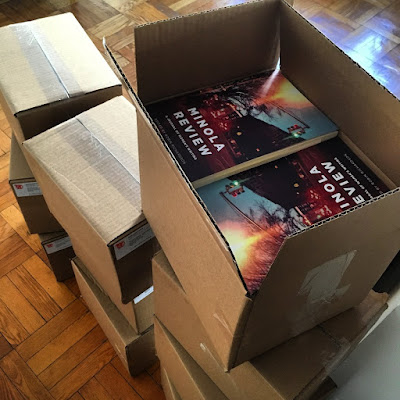 The colophon the collection offers the added information that this print anthology was compiled as the first in a potential series of annuals, which seems highly ambitious, something I greatly admire and look forward to seeing (I wonder if she might find a distributor for such, or if these books are meant to exist deliberately in shorter runs and smaller distributions, produced in part for the sake of the journal’s Patreon page). There is some very strong work collected here. And, while any new project might be expected to take a certain amout of time to work out the kinks, I was a bit surprised to see the typos throughout her acknowledgments. So then, this first volume of Minola Review: A Journal of Women’s Writing includes poetry and fiction that originally appeared in the online journal over the previous year by an impressive array of Canadian writers, including Lauren Hilger, Adèle Barclay, Cassidy McFadzean, T Kira Madden, Lisa Locascio, Shannon Bramer, Melanie Janisse-Barlow, Jessica Hiemstra, Erica McKeen, Paige Cooper, Toti O’Brien, Alina Stafanescu, Ashley-Elizabeth Best, Shannon Hardwick, Aja Moore, Alice Burdick, Catherine Graham, Madeleine Wattenberg, Madeleine Maillet, Marcis Bianco, N. Michelle AuBuchon, Kristie Betts Letter, Yen Ha, Violetta Leigh, Cade Leebron, Lauren Turner, Joanna C. Valente, Alana Dakin, Kara Vernor, Meghan Bell, Laura Page, Suzanna Derewicz, Kathryn Mockler, Klara du Plessis, Brandi Spaethe, Julie Mannell, Leah Umansky, kerry rawlinson, Brianna Ferguson, Jessica Van de Kemp, Tara Burke, Caitlin Pryor, Rebecca Salazar, Meaghan Rondeau, Jaime Forsythe, Kailey Tedesco and Kayla Czaga. Part of what appeals about an anthology such as this is how it focuses so heavily on emerging writers, showcasing multiple writers who haven’t yet published a trade book, or have published only one or two. There are exceptions, of course, but the bulk of the collection appears to focus on emerging writers, such as Vancouver writer Violetta Leigh, who opens her short story “BLESS OUR TEENAGE HEAT” writing:

Alison Yale watched it happen every morning. The rush of blood to his extremities erupted before the bell for first break. Whatever caused it kept her up at night—an extra pulse of his heart? A subtle tightening in the whorls of his brain? His hands always snapped to his face before it happened. He felt the minute tremor—the internal liquefaction—the same way an animal senses a coming earthquake.

I always appreciate being introduced to the work of writers I haven’t yet had the opportunity to read, and I was quite taken with the prose of Kara Vernor and Madeleine Maillet, two further writers I hadn’t yet heard of. Editor/publisher Richardson’s interests clearly lean toward a relatively straightforward lyric narrative, with much of the work collected here existing in that vein, with the occasional prose piece with an added extra music, such as Vernor’s striking “IF YOU’RE WITH A GIRL AND YOU’RE GOING TO HAVE SEX WITH ANOTHER GIRL, BUT YOU’RE ON YOUR PERIOD AND YOU’RE WEARING A TAMPON, CAN YOU STILL? DO PEOPLE EVER DO THAT?,” a piece that really does seem to (apart from being an entertaining piece willing to laugh at itself) roll to an entirely different kind of music.

Still, given the focus on emerging writers, I do wonder why the anthology exists sans author bios. Are we expected to move through google for further information, or does the anthology exist, quite literally, as an extension of the web journal that we’re to look through for such information?

with a pen.
A father, home

from work, places
a comic

on her desk. Richie Rich, Archie,
Casper the Ghost. She hears

the revving silence
of the Singer.

the right tree. Flight-maps
in air, traffic of matter.

There before
and there thereafter

They’ve stolen the song
from a mother’s mouth. (Catherine Graham)