I have been told that I walk like a man.

Last night a woman followed me at a party. I see something in you, she said. You’ve been raped. I know because I have too.

I want to ask you: Can you bear the life that you have?

Walking my dog down the street, passersby ask, “How old is he?” My dog is in fact a she. The mounting irritation I experience seems puerile, for what does it matter if a stranger incorrectly refers to my dog as male?

Today a tampon unwrapped and ejected itself into my tote bag.

Sometimes I get a sore back.

One time, at Gussie’s urging, I took the neighbor’s baby for a walk in the carriage and, inspired by passersby admiring my beautiful sister, offered to sell her for three dollars.

When I use my left hand it doesn’t feel like I’m me anymore.

The knot, an associative network that intersects at a hidden center, rising to the surface as a word.

This is the nodal point where discourse forms a hole.

A lunch bag full of donuts. A blank face. This smelly life.

If a topologist cannot distinguish between a coffee mug and a donut, since a malleable donut can be reshaped into a coffee mug, then how do I know whether I am a man or a woman?

I can be one as easily as the other. (Sarah Wang, “An Image Always Precedes”) 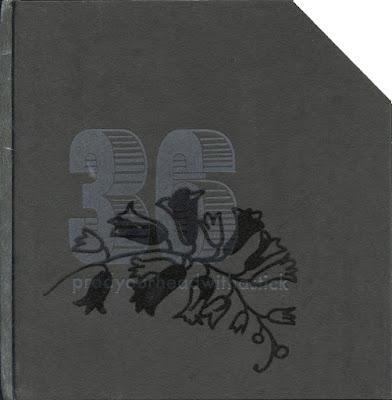 I’ve long been an admirer of Brooklyn’s 6x6 [see my prior reviews of issues #35, #32-#33, #30, #26 and #25], produced through Ugly Duckling Presse, and the most recent issue #36, is the final in the series. There hasn’t been much explanation anywhere as to specifically why they’re ending the run of the journal, other than the suggestion that they want to try other things, and the hint that there might be another project come up in its stead. Still: 6x6 is not only one of my favo(u)rite American poetry journals, but one of those (now) late-lamented journals that I’m very disappointed I couldn’t manage to get any work into (along with Nate Norward’s The Gig). So, while I’m sad to see the journal end, I can at least remind myself that multiple back issues are most likely still available through the Ugly Duckling Presse website, which will allow me, potentially, a few more opportunities to discover writers I might not have been aware of (6x6 facilitated my discovery of writers such as Anna Gurton-Wachter (who now has a chapbook forthcoming with above/ground press), Judith Goldman, Cat Tyc, Tony Iantosca, Jon Boisvert and William Minor, among others, for which I am entirely and eternally grateful).

The final issue, subtitled “prodyourheadwithastick,” includes (as it always does) new work by six writers: Anselm Berrigan, Chia-Lun Chang, Cheryl Clarke, Lisa Fishman, Vasilisk Gnedov (translated by Emilia Loseva and Danny Winkler), and Sarah Wang. New York City writer Sarah Wang’s extended prose piece, “An Image Always Precedes,” is incredibly striking, and I’m surprised, slightly, that she doesn’t seem to have a book out yet, despite work published in Joyland, n+1, The Los Angeles Review of Books, Conjunctions, Stonecutter Journal, Story Magazine and The Third Rail, as well as an excerpt of a novel-in-progress in BOMB magazine. I’m quite amazed by how the disparate sentences of her six-page work manages to cohere, even as it moves in multiple directions. Contributor Chia-Lun Chang, a Taipei, Taiwan-born poet, artist and translator, currently a member of the Belladonna* collective, is also the author of the chapbook (already out-of-print) One Day We Become Whites (No, Dear, 2016). Her six poems included in this issue are unapologetically political (concurrently responding directly and indirectly to the current political climate of the United States, and their current President), lyric and restless, and very much make me want to see what else she is capable of:

The Government Makes Me

lie if I want a visa. They paint me
a bunch of aloe. Locked fluid inside
my skin. But I’ve become a cactus
by adjusting to dryness. Others suggest
to mimic a rose. That’d make it easier to
get picked up. No one appreciates aloe,
people squeeze it to swallow and
apply on skin in summer kitchens
only. Check the box for venus flytrap,
to be a frozen predator.
None of the above dare to grow roots
until the government announces
that all of the thorns build a fence
preventing connections
from another side.

What can I say about 6x6? Just read it; just read everything in every issue. I mourn the loss of such a fine journal, yet eagerly await what might just be to come.