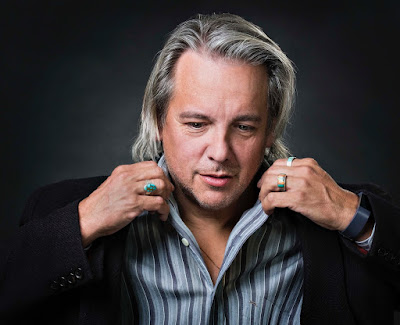 Drew Hayden Taylor [photo credit: Suzanne Carroll] is an award-winning playwright, novelist, journalist and filmmaker. He has done everything from performing stand-up comedy at the Kennedy Center in Washington D.C. to being Artistic Director of Canada’s premiere Native theatre company, Native Earth Performing Arts. He has won the Dora Mavor Moore Award, the Canadian Authors Association Literary Award for Outstanding Drama, the Queen Elizabeth Diamond Jubilee Award, and been a finalist twice for the Governor General’s Literary Award and once for the Stephen Leacock Humour Award. He was born and currently lives on the Curve Lake First Nation.

1 - How did your first book change your life? How does your most recent work compare to your previous? How does it feel different?
My first book was a play, so it didn't really change my life as much as the actual play did.  The play, TORONTO AT DREAMER'S ROCK, became a perennial play for young audiences, and was produced two or three times a year for about ten years.  It was amazing. The book itself made it possible for the play to be studied in schools and opened it up to more than just a theatre audience.  My most recent books have been another play, CREES IN THE CARIBBEAN, a comedy for adults and TAKE US TO YOUR CHIEF AND OTHER STORIES, a collection of Native sci fi short stories.  The progression in my mind as a writer over the last 27 years has been amazing. I have explored so many different genres and mediums in my effort to be a good contemporary storyteller.  Not only have I written sci fi, vampire tales, comedies, but also in the fields of prose, documentaries, television, a movie, graphic novels etc.

2 - How did you come to playwriting first, as opposed to, say, fiction, poetry or non-fiction?
Actually I came to television first. My very first writing credit (not journalism) was an episode of The Beachcombers. Then I wrote a Street Legal. Theatre came about two years later. I started off in television because I was asked to write an episode.  I did. It paid well. But even though I didn't understand it, I wasn't comfortable with the medium. It wasn't until I discovered theatre that I finally found my voice.

5 - Are public readings part of or counter to your creative process? Are you the sort of writer who enjoys doing readings?
I love doing public readings. I think I am a frustrated actor and get my highs through reading. The fact I work in comedy also helps. Who doesn't enjoy making a room full of people laugh?  Also, I seem t o now make about a quarter of my economy through public readings, lectures and workshops.  I know some authors don't like it but I find it enjoyable and an opportunity to meet people and find out what makes them tick.

8 - Do you find the process of working with an outside editor difficult or essential (or both)?
Now there's a controversial question. working with an editor, in theatre , television, and novels... In some situations, I view it as a necessary evil. They can be invasive and on occasion, counter productive.   Other times, its a welcome second and objective eye and point out things the writer may have missed. A lot of my work is definitely better after these sessions, but other times, I can't help but wonder what I've lost, and was it really necessary. Because of how arbitrary editing sometimes is, I have lost any interest I may have had in being a dramaturge or story editor.

16 - What would you like to do that you haven't yet done?
You know, I'm not sure. I have done practically everything in the writing industry...helped create my own television series even. done a graphic novel.  Maybe write a feature movie...that would be fun. I've done a made for TV one.  Maybe a video game or comic book series.  I don't know....probably just more of the same. Would love to have another successful novel.  Maybe another television series.  Maybe write something hat has more of an international appeal.

17 - If you could pick any other occupation to attempt, what would it be? Or, alternately, what do you think you would have ended up doing had you not been a writer?
Growing up I had wanted to be a number of things. A zoologist.  An astronomer.  And a bunch of other things. But I think my mother wanted me to be a handy man or a contractor or something useful. But upon years of reflection, I think I would have loved to have become, quite probably, a chef of some kind. Roughly, I think its kinda the same thing as being a writer. It's working hard on creating something that other people will enjoy. Plus the fact, my mother was a cook and I have grown to enjoy cooking on what I call an amateur level.

20 - What are you currently working on?
So many projects and so little time. On October 5th I have a play, SIR JAM; ACTS OF A GENTRIFIED OJIBWAY REBELLION, opening at the National Arts Centre in Ottawa. In February I have another play opening in Toronto at the Tarragon, called COTTAGERS AND INDIANS.  In January a documentary I co-directed on the German obsession with Native culture premieres on CBC television.  And I am 24 thousand words into a new novel...oh and am waiting to hear back from the CBC about a proposed TV series I developed for them and White Pine Productions.