Born in Regina on May 24, 1962, and raised in Vancouver, Shaw was fully immersed in the vibrant Vancouver art and writing communities of the mid- to late 1980s and early 1990s, and spent several formative years as a member of the Kootenay School of Writing collective (which is where I met her), arranging readings, talks, workshops, and classes. During this time she began writing poetry, and was also a visual artist, editor, and curator, serving as artist-in-residence at Vancouver’s Western Front, co-editor (with Jeff Derksen) of Writing magazine, and curator of the Or Gallery; throughout her career, she produced for art catalogues and magazines insightful essays that display her characteristic blend of intellectual clarity and playful curiosity. In the early 1990s she moved to Montreal to attend McGill University, where she earned both her master’s (1995) and doctorate (20000) in communications (she wrote her master’s thesis on West Coast style, while her doctoral thesis examines the Museum of Modern Art’s Television Project, 1939-55). She completed a post-doctoral fellowship at New York University, and taught communications at McGill, Rutgers, Wilfred Laurier, Simon Fraser, and Capilano Universities. All of which is to say that when Shaw describes the Canadian art collection N.E. Thing Co.’s “constellations of collapsing and interacting territories, calling attention to the hidden interdependence of corporate, artistic, and domestic spheres” (“Siting the Banal,” 33), she could be describing her own method. Her intricate, dense texts are at once cinematic and spatial; read as a whole, they construct “constellations of collapsing and interacting territories” (68), a shaky, impermanent site of resistance, rigorous inquiry, and potentially spanning three decades and multiple genres, which crucially comes to no definitive conclusion, but is only cut short by her untimely death from cancer, in 2007, at age forty-four. (Catriona Strang, Introduction, “‘Constellations and Contingent Networks’: Nancy Shaw’s Structures of Possibility”)
One of the first elements that strikes around Nancy Shaw’s posthumous collection The Gorge: Selected Writing of Nancy Shaw, edited  by Catriona Strang (Vancouver BC: Talonbooks, 2017) is the short sentence etched at the bottom of the back cover: “The Gorge: Selected Writing of Nancy Shaw resumes the affordable and carefully curated Selected Writing series Talonbooks began in the 1980s.” If you aren’t familiar with the series, the first seven titles (a Gerry Gilbert selected was suggested, but declined by the author) were released during 1980-82 as small paperbacks, aimed to capture university and college course-lists, and included: bpNichol, As Elected; Frank Davey, The Arches; bill bissett, Beyond Even Faithful Legends; Fred Wah, Loki Is Buried at Smoky Creek; Phyllis Webb, The Vision Tree; George Bowering, Particular Accidents; and Daphne Marlatt, Net Work. Each volume opened with a critical essay on the individual author’s work, and the series can easily be seen as a precursor to the ‘critical selected poems’ series by Wilfrid Laurier University Press, through their Laurier Poetry series, or The Porcupine’s Quill, Inc.’s The Essential Poets Series. While Talon might have produced multiple volumes of ‘selected poems,’ and even collected poems, over the years (by poets including Barry McKinnon, Artie Gold, Sharon Thesen and Roy K. Kiyooka, with more recent Fred Wah, Phyllis Webb and Daphne Marlatt volumes), their return to, as they say, “affordable volumes,” is an intriguing shift to that original goal of getting as many copies into readers’ hands as possible, including as potential classroom texts. 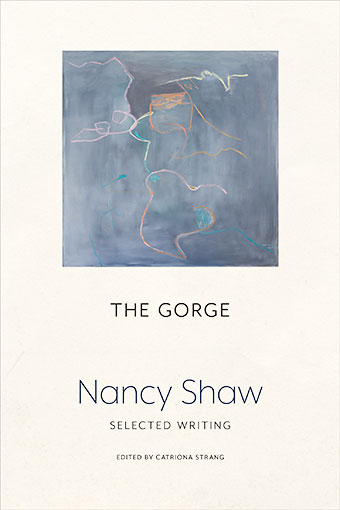 As her friend, editor and frequent collaborator Catriona Strang writes in her incredible introduction, Vancouver poet, scholar, curator and art critic NancyShaw (1962-2007) was an important part of the informal group of poets around The Kootenay School of Writing for a number of years, and collaborated with a wide group of writers, artists and curators over the length of her creative life, including, as Strang writes: “[Stan] Denniston, but also Gerald Creede, Jeff Derksen, Eponymous Productions and Management, Monika Kin Gagnon, François Houle, Jacqueline Leggatt, Eric Metcalfe, Lisa Robertson, me, and Mina Totino (the results of several of these collaborations are included in this collection).” Reinforcing just how important Shaw’s connections to others were, in both her life and her art, Strang continues:

Collaboration is at once a shared labour, an acknowledgment of community, of the fruitful conversations, side-tracks, and pleasures we share with friends and colleagues, and a lapsing or slipping away from the seemingly omnipresent notion of a single, distinct creator. Thriving as it does on co-operation and discussion, collaboration can be messy, challenging, and difficult. It can also be a sustained and sustaining act of love, friendship, and support, a sharing of the weight of creative labour, and indeed of living. It acknowledges the relationships often overlooked when works are attributed to single creators, giving credit to the contributions of our children, our friends, our neighbours, our lovers, not to mention the media we consume, the conversations we overhear, and the detritus of daily life, so that the distinction between a creator/producer and her surrounding community becomes blurred or even unimportant. The collaborative text becomes a terrain of relations and possibilities, “constellations and contingent networks” (“Idea File,” 34); at the same time it is a method of inquiry – “we want to unravel the conditions of our engagement” (Light Sweet Crude, 111) – producing works that, as Christine Stewart puts it, “investigate how we come to know and be and mean” (Stewart 2000).

This current collection selects from a range of Shaw’s published works, including Affordable Tedium (Vancouver BC: Tsunami Editions, 1987), Busted (with Catriona Strang) (Toronto ON: Coach House Books, 2001), Light Sweet Crude (with Catriona Strang) (Vancouver BC: Line Boks, 2007) and Scoptocatic (Toronto ON: ECW Press, 1992), as well as a variety of pieces pulled from catalogues, journals and anthologies, and even an array of previously unpublished works, including “ARCADES LETTER” (below). Part of what becomes immediately clear about going through the work in this volume is how fresh the pieces remain, presenting both a critical eye and a lively sense of language, meaning and sound, still able to remind one just what might be possible in writing. Even for those of us who might already have copies of all her trade collections, such a selected, especially with previously unpublished and uncollected works included, allows for such a wonderful opportunity to revisit the work of an author one might not have looked through in some time; and, too, to mourn such a significant loss.

“The state of grief is (not) a democracy.” Committee of memory. This resolution. That resuscitation. Some officials wondered at the refusal to let go. I freely admitted that we didn’t get away with what we wanted. Quite simply a custodian of resources. In denying the rumour, he refused to say what it was about. They cruise through the geography of war. Most said they wished for a burial site that was local. “We understand that you have different needs and obligations but we have no knowledge of how to mourn your loved ones. We hope for an agreement, but we don’t have a position.” Punctually cringed. Constantly tugged. Takes epic command by capitulating, adding confessions, metaphors, and distortions. Aimed to demonstrate the emotional pull.

To transform aggressive energies into states of industrial alchemy involves weather, musical structure, and improvisation. This goal was reflected in her posthumous memoir. It isn’t just that they cultivated accents and customs of speaking in full, grammatically correct sentences patched with droll tributes. From the very first bar, it was a parenthetically broken fantasy. In an opal fog, he travelled with one of his few salvaged possessions. It was a copy of a rare letter. He sold it and opened a tiny shop. They wear pumpkin-orange and pale-green profiles with watches that follow the seasons. In an off-axis aural crease, we pulled at her collar. The gesture suggested prim – alluring and disposable. She avoided discrepancy. Her gamboling angel took heed with every step and pose this was suited to the astounding repertory. Often this angle would lie on the floor, long and uneven.

A piper of unspecified dignity eschewed access to security. Yet to detect. Yanked. Is deceptively less classical, in a smaller square of light. The data shrunk in comparison, nuzzling, rotating in exquisite patterns. Retribution and lust collide. The tenor of a once-stable custom.