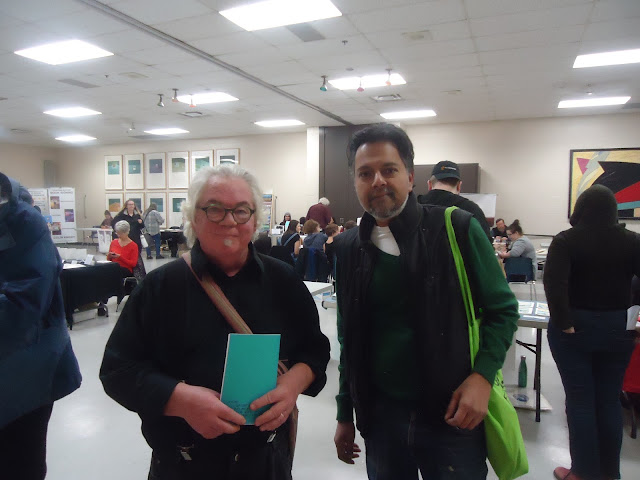 [Michael Dennis, with Faizal Deen's latest above/ground press chapbook, and the author as well] With our most recent event, our ottawa small press book fair is now twenty-three years old (the next fair will most likely occur in June; keep an eye on this space for announcement/details, most likely by the end of January)! And, yes, we’re starting to get exhibitors actually younger than the event, if you can imagine. So there you go.

I didn’t manage to peruse every table, but I did manage to pick up a handful of items during the day.

Ottawa: Co-edited by Conyer Clayton (although no other editors are listed; one wonders if the publication was edited via collective, and the list of contributors is a list of the editors as well) and issued by &Co. Collective for the day of the small press fair is the first issue of Indistinguishable, subtitled “as if forgetting were silence to be filled,” and includes poems by Claire Farley, Jennifer Pederson, nina jane drystek, Liam Burke, Chris Johnson, ian martin, Conyer Clayton, Mia Morgan and Dorian Bell. Frustratingly produced sans author biographies, this quite attractive, yet uncomplicated, publication, as Clayton writes at the offset, “grew from several evenings spent together workshopping our own poetry and practices. It feeds off a collective desire to develop and grow in the public arena and develop a strong poetic community. I sense we all want to eliminate the distinction between artist and individual, to accept advice, listen, and grow in a world full of overwhelming sound.”

in the corner i curl roller coasters into finite tubes

i can never have enough

we err in sitting, it’s the belly
that connects with the cosmotic zing

that thing curving in the corner when you aren’t looking, seething

teething on fourth dimensions falling somersault over another

we stare each other down willing ourselves to uncorner

find the twisted ladder and scuttle between the universe’s legs

head overhanging the edge i only catch my light returning

senselessly shed on a bench by the river

There has been a surge of interesting poets emerging in Ottawa over the past few years, a surge that, given my home-ness with children, I’ve managed to be less aware of than I might or should be, so I appreciate the opportunity to be reminded of this (although Farley and Johnson’s work, both of which I quite like, have been on my radar for a while), and this publication even managed to introduce me to a poet or two (such as martin and Bell). Some of the work here is rough, but all of it manages to be interesting; all of it from a loose association of poets that will and are worthy of further attention. The second section of Farley’s two-part poem “Bait-and-Switch” reads:

as if forgetting were silence
to be filled 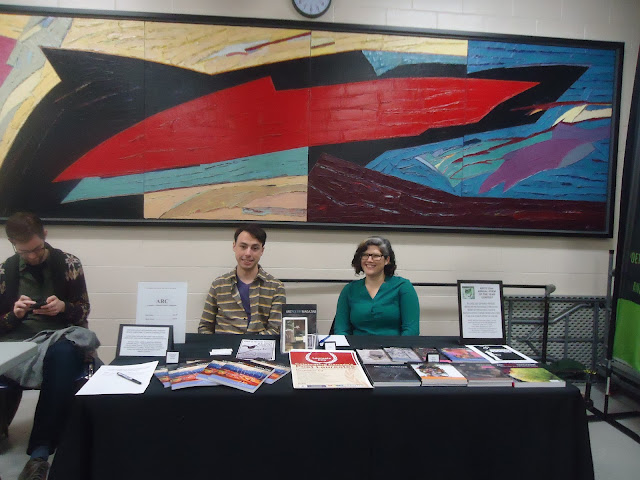 We were listening to this one song without words that seemed to be about somewhere in the southern United States and possibly the railroad. I began to feel a guilt which I associated with my grandfather who could play the harmonica and kept a model train set in his basement he built to travel through a papier-mâché tunnel, the surreal green of both leaves and trunks. He hired an artist to paint the mountains. I perhaps felt guilty because I could not remember if he still had the train set or had sold it. Not being able to remember made me feel as though I had not paid enough attention to the place in which he lived, but surely my grandfather had decorated, save for the train set which might still be in the basement or might have been sold.

This is the process by which our bodies exchange information with our environment. The specific term for this process will be included in the essay. I am in the essay too but I am lost inside, a series of vertiginous ramblings in which I have to explain myself. If I am successful someone will boost me high enough so I can see myself outside with him, by the river.

There is something really compelling about the accumulation of these pieces, existing somewhere between postcard fictions, a short story and a long prose poem, reminiscent slightly of the work of Brooklyn poet Anna Gurton-Wachter, for example. While the roughness of the cover (warped slightly, due to, I would imagine, the hand-painted watercolour covers) might have turned me off a bit, this is an impressive work, and one enough to make me want to read far more of what Adams has produced.