Marie Buck, Goodnight, Marie, May God Have Mercy on Your Soul

Once I was at an ice-skating birthday party. It was the first time I had ever ice-skated.

I felt joyous but wrong.

I went to the bathroom and was washing my hands. I vomited suddenly and tried to swallow it, as I didn’t want to be sent home, though some of it overflowed my mouth and dripped down my chin into the sink. I rinsed my mouth out. I didn’t want to stop skating so I skated more.

Later my friend’s Italian grandmother made us spaghetti to eat. People’s parents were starting to show up and everyone praised the real Italian spaghetti.

But I was different.

After eating the spaghetti, I went down to the bathroom in the basement and threw it up. An adult came to check on me and stayed there with me in the dark patting my hair and then called my mother.

When I’d recovered a bit they brought me back up to see my friend blow out her candles. The cake showed my friend, Michelle, smiling next to Grox. Michelle didn’t really look like herself, but Grox’s scales and fangs were extremely realistic. “Happy Birthday, Michelle!” the cake said, in white icing. 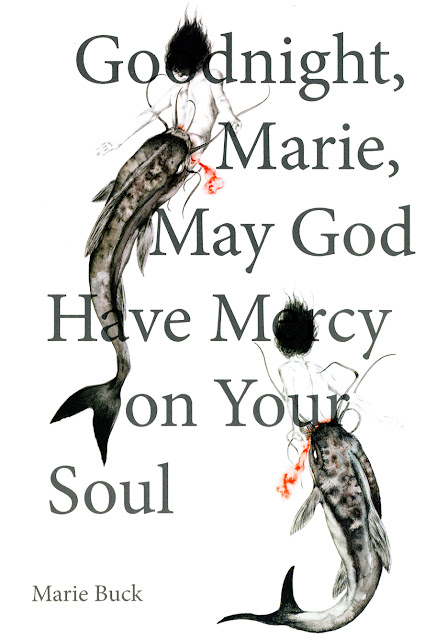 Marie Buck’s third collection is Goodnight, Marie, May God Have Mercy on Your Soul (New York NY: Roof Books, 2017), a book of dark, surreal, neurotic and potentially biographical poems exploring the underbelly of childhood. The poems move back and forth between lyric narratives and prose/memoir-ish poems titled via numbers, existing almost as a Greek-style chorus throughout. As she writes: “This story is a disgusting narrative in which I’m converted / from a person I dislike a little to a person I really hate, who / gets even sadder and more neurotic.” Buck’s Goodnight, Marie, May God Have Mercy on Your Soul exists in a strange dream-state, except more strange for knowing how ordinary so much of what is being described actually is. Composed as both witness and an appeal, crying out in rage and pain and frustration, the poems work to unsettle, in part through their matter-of-factness, and includes poems with titles such as “A Baby Elephant Sees the Ocean for the First Time as It Quietly Dies,” “I Feel Like a Flat Balloon Until I see You and You Inflate Me,” “Water and Lava Inside a Closed Mountain” and “The First Time I Ever Really Felt Safe Was Under the Weight of a Wagon Wheel,” that includes:

The second part of this poem gets a little freakier:

it’s a man commanding another man to rise from the dead.

The dead man feels, he feels a strange tugging.
A long hair from his head is trapped between the cheeks
of his ass,
and the first feeling he has is the hair shifting slightly,
responding to some imperceptible movement he never made
because he was dead.

A shifting where he didn’t expect it,
which causes awareness.