In Of Form & Gather, poems become choral assemblages to their proximity, tuned into the maker’s spirit as coiled out from unhurried interactions with ancestral zygotes. Where does identity invoke place over silence—intimate implications of nuance, trust in the reader’s ability to move in concert with the writer’s soul? If even a fraction of beyond-space is gleaned by possibility, the maker’s job is done. If one could imagine what awaits between where one could go and why one has remained, would that bring us to a finite completion—a cyclic undercarriage of removal in the language remaining? (Edwin Torres, “Introduction to the Poems”)

The author of three prior poetry chapbooks, Colorado poet and editor Felicia Zamora’s first full-length collection is Of Form & Gather (Notre Dame IN: Notre Dame University Press, 2017), produced as part of the 2016 Andrés Montoya Prize (as judged by Edwin Torres). Predominantly set in prose blocks, Zamora’s poems shift from meditative narratives to short lyric essays, sketched in ways deceptively straightforward but multiple and slightly askew. The title to this debut is intriguing, suggesting a composition of disparate elements gathered into a series of collage-works set in particular shapes; the collage element might be there, but the poems appear to emerge even as you are reading them. “you remember your cells,” she writes, in the poem “O for passage,” “belonging to others, before the dark grew you [.]”

You take a photo of the thermometer
outside the window; think degrees of, think
what blurs & what melts from; the truck full;
the tin roof gleams in midday

& her eyes in pools; think torn of; think

ground; how we memory out of; how place
haunts behind each pupil; how rusted poles
suspend the MOTEL sign; shadows in cast;
think spells; cradle of; of the mulberry tree;
think where fireflies catch; bark once in curve

to your body, towers silent, deep in root. 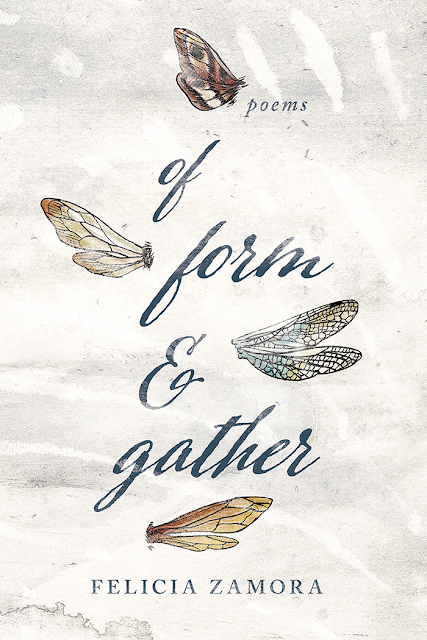