Brooklyn editor and poet Daniel Poppick’s first full-length poetry collection is The Police (Oakland CA: Omnidawn, 2017), a book he discusses in an interview conducted by Gillian Olivia Blythe Hamel, included as part of the press package:

When I first conceived of The Police in my early twenties the police were, in my mind, really just a conduit for myth: vaguely malignant, a power I knew even then that I didn’t understand. I imagined the police as a unified body that directed and animated everything—vision, speech, the flow of capital, even the way plants grew. I suppose I still think of the police that way, at least in these poems, and that’s why the book still has this title. And while these ideas of control definitely haunt the poems, the book is also an attempt to recognize the dangerous silence that occurs when bodies of power such as “the police” are abstracted by art. In the intervening years we’ve collectively witnessed, often mediated by our screens, a police force doing terrible things that we can’t unsee. White America specifically was shown a world of racism and violence that it had protected itself from, that it had allowed itself to mythologize for a long time, even though we’d seen it before. And so seeing the real world police force for what it is—a systemic force that disproportionately harms people of color and other disenfranchised communities—has meant taking a hard look at my privilege, and complicity, and relationship to power, and poetry and much else. I reflected on the title poem, in which I narrate an interaction that I had with an officer in 2011. I think this speaks to what you mentioned earlier about gesturing toward community from the personal. Making art for an audience, even a small one, is an inescapably public act, so I had to decide what part of that personal, sad, ugly process truly needed to be dragged out in the public act of writing. In the end it’s on me to do that work alone without making a spectacle of it. What remains in the intervening poems and in the title, inextricably, is a new awareness of my own whiteness and an altered cosmology of vulnerability. 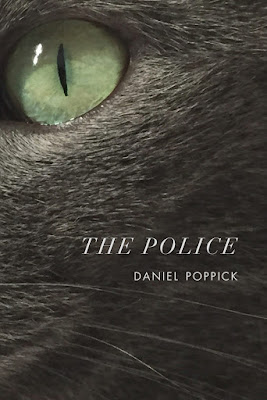 The interview suggests such a sense of narrative or thematic purpose to the collection, yet Poppick’s poems in The Police seem to be composed far less with any sense of overt narrative line or thread than as a series of accumulations, as though Poppick himself is also, through the writing, attempting to see where the poems might end up. Poppick’s lyrics are meandering, lush and inquisitive, writing to seek out both explanations in an increasing dark and the sources of such unusual light. The poem “PARADISE” opens: “It’s snowing on the demented / Lions denting / This museum’s entrance. / To call it / A library would / Swerve space like / A claustrophobic pissing down his spine / To open his nerve.” Part of what appeals about Poppick’s poems is his indirectness, one that feels, at times, unrelenting, especially in some of the extended pieces, while at the same time seeming incredibly precise. There is an enormous amount to unpack in his lines, such as in the poem “GLASS HORSE,” where he writes: “I wrote a story about my father, only / the first sentence was true.”

If to write around a space is to compose an absence, Poppick’s poems write out something far more complex, uncertain and impossible, something that, in its own way, can only be articulated through these indirect field notes. “It is not impossible to fit & channel love / Through a glowing two-dimensional / Plastic screen but it sucks.” he writes, as part of the title poem. The twelve-part sequence “DIARY” begins:

GOTARO did not move with-
out, he talked over
duck silence, a rental
sulk. The stove could
hurt but Gotaro was blurting
faith in an
algae he made with his
breathing. Here was the
valve, it poured forth a veil.
no one confused
ruination with sails so
Gotaro lit into the limb
of a window. Off in the city
a building breathed

Posted by rob mclennan at 8:31 AM
Labels: Daniel Poppick, Omnidawn