12 or 20 questions with Kasia Jaronczyk 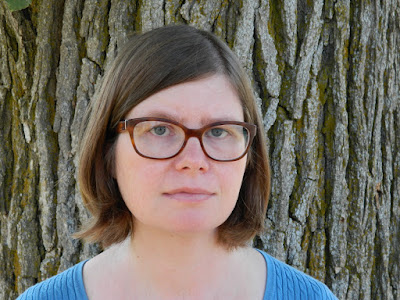 Kasia Jaronczyk is a microbiologist by training. She has published poems and short stories in Room, The Prairie Journal, Carousel, Nashwaak Review, and in Postscripts to Darkness (an anthology of dark/horror fiction). Her stories have won first place at the Eden Mills Writers' Festival Fiction Contest in 2010 and second place in the GritLit festival in 2014. Her work has been longlisted for the CBC Radio Literary Award 2010 and shortlisted for the Bristol Prize 2016. She is the co-editor of Polish(ed):Poland Rooted in Canadian Fiction, an anthology of Polish-Canadian short stories that will be published in  September 2017 by Guernica Editions. Her debut short story collection Lemons was published by Mansfield Press in May 2017. http://kasiajaronczyk.weebly.com

1 - How did your first book change your life? How does your most recent work compare to your previous? How does it feel different?
Lemons is my first published book and it is the realization of a life-long dream. I have been writing since I was seven years old, but even though my stories and a few poems have appeared in literary magazines, I hesitated to call myself a writer. Until now.

2 - How did you come to short stories first, as opposed to, say, poetry or non-fiction?
When I was seven years old I wrote my first poem and have been keeping diaries for just as long. My writing underwent a huge transformation when I emigrated from Poland, and had to switch from Polish to English. I stopped writing poetry for a long time while pursuing a scientific education, but then certain traumatic events at the end of my Master’s degree in microbiology led me back to poetry, and later, somehow naturally, I switched to writing short stories.

3 - How long does it take to start any particular writing project? Does your writing initially come quickly, or is it a slow process? Do first drafts appear looking close to their final shape, or does your work come out of copious notes?
I often think a lot about a new story before I write it, partly out of necessity (I have two small children and find it hard to find time or energy to write), and partly because that is the way my mind works. The first draft comes usually pretty quickly, several hours spread over a few days, and often it is a complete story. The next step varies a lot, sometimes there is a lot of rewriting, editing, sometimes less.

4 - Where does a poem or work of prose usually begin for you? Are you an author of short pieces that end up combining into a larger project, or are you working on a "book" from the very beginning?
When I write autobiographically, the stories come from my memories or something I heard. Other stories often start with images or scenes.  I have never written stories with a collection in mind, rather, I noticed that I had written a lot of stories about the same group of characters in Communist and post-Communist Poland, and then I wrote a few more to make a collection that became Lemons.

5 - Are public readings part of or counter to your creative process? Are you the sort of writer who enjoys doing readings?
I have only done one reading so far, when I won an Eden Mills contest a few years back, and I remember I was very nervous. I am a private person, and never had enough courage to share my work in public. However, I am looking forward to reading from Lemons, I am proud of the collection and would love to hear what others think of it.

6 - Do you have any theoretical concerns behind your writing? What kinds of questions are you trying to answer with your work? What do you even think the current questions are?
I am interested in how subjective memory is, how there is no single truth about past experiences, and how people lie to themselves.  Also, through my autobiographical writing especially, I want to immortalize people and places that are the past and don’t exist anymore.  I also write about dysfunctional families and relationships, not just about alcoholism or abuse, but about how love can become deformed into something monstrous and destructive unintentionally; how children’s lives are really complex, how they can be cruel and uncompromising in their interactions, and how the adult world enters theirs, sometimes in dangerous ways.

7 – What do you see the current role of the writer being in larger culture? Does s/he even have one? What do you think the role of the writer should be?
I think that depends on the writer. I think a big element is teaching empathy and understanding of the other. But of course there are writers who write politically and have an important message. Personally, one of my goals as a writer and editor, is to interest Canadian readers in the writing of Polish-Canadians, and perhaps also in Poland and Polish people and history as a literary subject. To this aim, I have edited Polish(ed): Poland Rooted in Canadian Fiction, an anthology of Polish-Canadian authors that is being published this fall.

8 - Do you find the process of working with an outside editor difficult or essential (or both)?
I think a good editor, or an editing friend is essential for any writer. When working on any piece of writing there comes a time when we are just not able to look at it in a fresh way, when we become blind to its shortcomings, and someone else is invaluable in showing us how to improve it.

9 - What is the best piece of advice you've heard (not necessarily given to you directly)?
I would say to beginner writers – you can learn the craft by yourself, there are a lot of great writing craft books out there. So if you cannot afford a writing program or course, learn from them. Secondly, to advanced writers, I strongly suggest finding at least one other writer, who writes at the same level or better, and ask for critiques of your work. You will learn a lot from this, and from editing another person’s work.

10 - How easy has it been for you to move between genres (poetry to short stories to reviews)? What do you see as the appeal?
For me moving from writing poetry to short stories happened naturally, and I am afraid also because good poems are much harder to write than good stories, at least for me. However, I am working on a novel now, after years of writing short stories, and I find it harder just because I am used to holding the whole story in my head, in terms of plot and structure, which is impossible with a novel for me.

11 - What kind of writing routine do you tend to keep, or do you even have one? How does a typical day (for you) begin?
I don’t have a routine, again because of young children. However, I am hoping to write every day for several hours once they are both in school, which is what I used to do.

12 - When your writing gets stalled, where do you turn or return for (for lack of a better word) inspiration?
Luckily I don’t suffer from lack of ideas, however I find the hardest part is to just sit down and write. I am deathly afraid of the so-called shitty first drafts, of how shitty they are. I often cringe at every word I write, but keep at it and eventually it gets better.

13 - What fragrance reminds you of home?
Wet cement, and concrete, definitely. I love it. I think it smells like cucumbers. I grew up on the outskirts of Warsaw, surrounded by never-ending construction of new apartment blocks (due to slow communist economy, lack of supplies), empty lots, scaffolding, drywall. As kids we used to steal bags of cement and mix it with water to play with it.

14 - David W. McFadden once said that books come from books, but are there any other forms that influence your work, whether nature, music, science or visual art?
I am a painter as well, so definitely visual art, photography and film. Also history, sociology.

15 - What other writers or writings are important for your work, or simply your life outside of your work?
I read a lot and I’m continuously fascinated by new authors. There are really too many to list. What I can say is that my biggest literary obsession, because it lasted so long, was reading Dostoyevsky and everything about his life and work, starting in grade 8, throughout high school and undergrad. It was not good for my writing because it predisposed me for writing big melodramatic scenes, but I would love to write subtle, quiet but powerful stories.

16 - What would you like to do that you haven't yet done?
I love people, I’m intrigued by them, so I would love to be able to enter people’s bodies and know what they think, how they live.  A more realistic answer would be to travel to different places and stay in each long enough to really get to know how people live there and what they are like. That is, to become a part of the local community and not to just be a tourist.

18 - What made you write, as opposed to doing something else?
I always wanted to be a writer, but I became a scientist first, which was because I didn’t believe in myself enough to choose a writing career in what is my second language.

Whenever I watch movies and see something that amazes me as an artist, I always try to figure out how I could achieve a similar effect in writing.  The last movie that I loved was Take Me tothe River, written and directed by Mark Sobel. It is a story of a gay Californian teenager who goes to a family reunion in rural Nebraska, and a young girl with blood on her dress, which initiates a series of quietly terrifying events. What is so great about this film is what is not being shown. What is hinted at, and what the audience keeps expecting and guessing, is much more terrifying than what actually happens on screen. I would love to be able to write like that.

20 - What are you currently working on?
I’m working on a novel that has a double plot line, one that takes place now and one that happens in late Victorian Canada. It investigates a power struggle between the genders, and involves manipulative muses, abusive doctors, psychiatric photography, painters, hysteria, asylums and theater.