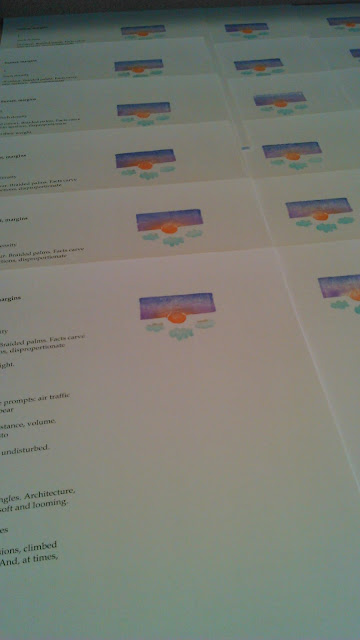 I’ve a new broadsheet out today! You should come by the ottawa small press fairtoday and swing by Marilyn Irwin’s shreeking violet table and pick up a copy. I mean, we’ll see you there, right?

(Do I even still write poems? I can’t recall. Where do I even find the time?)

And of course, the big Chaudiere Books 2015 spring poetry launch is on Thursday at Raw Sugar Café! William Hawkins (Cameron Anstee reading for him, given a recent illness) and N.W. Lea, with a special acoustic set by Jesse Patrick Ferguson.

Philadelphia PA: I’m always happy to hear about new (or at least, new to me) presses, so was thrilled to receive a copy of Rosmarie Waldrop’s gorgeous new chapbook, IN PIECES (Philadelphia PA: O’CLOCK PRESS, 2015).

To feel an idea is different. And rare. A private fluency of figment and frontier. A splinter in the sky. Let’s not get sentimantic. The word “reality” is a word. Atoms are unpredictable, a warp in a continuous field, a gamble against the powers of disorder. But grammar can unpack a sentence it has taken you so long to understate. What open window? What thin but penetrating light?

Waldrop’s stunning sixteen-part essay-sequence proves, yet again, that some writers (not nearly enough) continue to improve, even after decades of publishing. IN PIECES manages to cohere in multiple directions, contemplating language, poetry, sex and the poetic line, allowing the most incredible connections through the almost-collage of thought, sound and sentence.

Rose’s poems is saucy and revelatory, expanding Stevens’ original short haiku-like passages into a rush of longer sentences that have the force and weight of water, and revel in a particular kind of seductive play that also pushes to explore, criticize and indict a level of complacency in Canadian poetry. We need more poems (and criticism) that call us on our shit. As she writes:

You love the serious, heterosexual guy you’d go fishing
with. Because women can’t be men and Chinese can’t
be guys and homosexuals can’t be the best and you only
teach the best. It’s a math proof and the answer equals
you. Because it’s all about love, true love, those whom
you truly, truly love.

Isn’t that unfortunate? Isn’t that serious? Because the best
by any other name is still you, squared.
Posted by rob mclennan at 8:01 AM
Labels: BookThug, O'Clock Press, ongoing notes, poet laureates, Rachel Rose, Rosmarie Waldrop, shreeking violet press