Instead of meditating, I mop
the floors and hallways.
To prevent downloading free
music, Dutch cable companies
obtain a court order to block
access to the pirate bay.
In fancy gyms across the city,
people steal from each other,
yuppie-on-yuppie crime
while musicians and night
workers seek the quiet dim
of dark apartments. At sunset,
I switch on the parking lights
and run upstairs to pee,
hoping the police won’t
notice. Then I circle around
block after block, finally
finding a tiny spot between
B and C, in front of the yuppie
building with a doorman,
a doorman’s sole purpose,
so they say, to provide security. 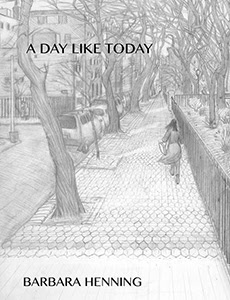 In the acknowledgments of New York poet Barbara Henning’s newest collection, A Day Like Today (Mobile AL: Negative Capability Press, 2015), the first real experience I’ve had with her writing, she writes that “These poems were composed from daily one page journal entries written in 2012. Many thanks to the New York Times writers (2012) for words and phrases collaged into the poems.” Henning’s compositional method has created a collection of densely-packed daybook-collage lyric capsules, managing to contain an incredible amount of information down the length of each page, as well as a great deal of breathable space between each line (which allow her poems not to collapse beneath their own weight). Bouncing from point to point to point, the shape and the tenor of her poems is reminiscent of the cadence of a number of poems by Cobourg, Ontario poet Stuart Ross, sans his trademark surrealism, as she allows the poems to end up far from the beginning, but still managing a somehow-coherent thread despite the tangents and leaps. Constructed in five sections—“Winter,” “Spring,” “Summer,” “Fall” and back to “Winter”—Henning’s poetic diary reads, in parts, as arbitrary as Gil McElroy’s ongoing “Julian Days” sequence; less interested in temporally placing the poems per se than allowing the random elements of her source material during those periods direct a certain degree of each poem’s movements. One might ask, are the section-headers meant to add or distract, or have they no purpose at all but as reportage itself, letting the reader know in which season each poem began? And yet, other poems do read as reports on specific activity, whether writing that “In the graveled garden / behind Unnameable Books / Patricia Spears Jones / is reading her poems.” (“UNNAMEABLE”), or that “I met Lewis for lunch / at Angelica’s. We eat wee / dragon bowls with mu tea. / Then I bike over to Santo’s / in the rain to make copies / of my poetic prose book.” (“I MEET LEWIS / FOR LUNCH”).

Mr. Zlobin writes a book
about Americans and how we
interrogate complete strangers.
Two men interrogate a woman,
one in gentle, soothing tones,
while the other fires staccato
bursts of accusatory questions.
Her husband is reading a magazine
called Wired when she repeats
her question. He snarls and
commands that she be still.
To issue spoken commands
on most Androids, you must
tap the microphone gently.
In Russia, children are raised
by their grandmothers.
An average mother would never
dream of leaving her child
with a teenager. She says
it seems as if he doesn’t care
about her. He stands up
in a wild sea storm in the Gulf
of Alaska, where a Shell Oil
drilling rig runs aground
with 139,000 gallons
of diesel fuel. The unified
command will be monitoring
the situation. It’s midnight
with fireworks when he walks
out while his wife is pleading
with him to stay. Frankenstein’s
monster on occasion turns
out to be rather sweet.