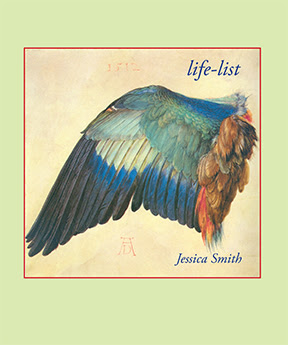 American poet Jessica Smith’s long-awaited second trade collection, life-list (Victoria TX: chax press, 2015), is a remarkable collection of expansive and exploded lyrics stretched and pulled apart to form staccato breaches into memory, multilinearity, meaning and language. As she explains in a recent interview posted over at Touch the Donkey: “I want to use the whole space of the page and approach it like a kind of blend between painting and poem, in that the words are usually arranged roughly left-right, top-bottom, but not entirely. I see the space of the page as already having a certain “weight,” like it’s not a blank/silent space, and that concept was molded for me by John Cage, Marcel Duchamp, Jackson Pollock and Steve McCaffery. I was also inspired, early on, by installation art, which along with sculpture is still what excites me the most: I want the audience to physically participate in the making of the object.” Structured into two sections—“observation” and “memory” (a selection of the second section published as a chapbook, here)—the poems in life-list, published a full nine years after the appearance of her Organic Furniture Cellar (Outside Voices, 2006), suggest far more might be possible, with further titles in what could simply be the opening work of something far larger. If this is Smith writing out a “life list,” how many entries might there be?

Part of what is remarkable about Smith’s work is her use of fragment and space, allowing the poems such a breadth of multiple readings and meanings, even while allowing a strong intuitive narrative grounding. There is something lovely and deceptively light in the way her poems accumulate so subtly into such hefty, serious weight, pinging across the margins of the book in ways that deserve as much to be heard aloud as experienced upon the page. Further in her Touch the Donkey interview, she responds:

I choose the page as a constraint: Often when I asked for poems for periodicals, I ask the editor about the margins, page size, and font, and then I write a poem specifically for the magazine within those constraints. When I write a larger project on my own, I choose my own visual constraints. I enjoy writing by hand on square pages, but when I transfer drafts to the computer I try to choose standard printer sizes for paper and margins and standard, readable typefaces. I am constrained by the current standards of publishing, but I choose the constraint for myself with an eye to publishing because I want a larger audience than the kind of micropublishing that non-standard pages/typefaces would require. So, yes, I sometimes feel limited by page space, but the limitation is positive. I need boundaries! It helps me concentrate on other things.

Given her use of space, it becomes nearly impossible to replicate the poems in a forum such as this, but one should attempt to read as many as possible online in other places, such as here and here and here.
Posted by rob mclennan at 8:31 AM
Labels: chax press, Jessica Smith