inside the dog
another dog

inside this dog
it’s Stephen Harper

and inside him
a still smaller dog

it’s Stephen Harper
all the way down

Stephen Harper
why do you make things so small? 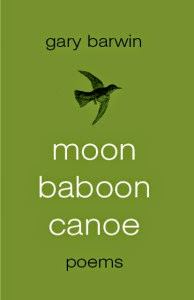 Hamilton, Ontario writer, performer and composer Gary Barwin’s follow-up to his poetry collection The Porcupinity of the Stars (Toronto ON: Coach House Books, 2010) [see my review of such here] is moon baboon canoe (Toronto ON: Mansfield Press, 2014). The poems collected here are softer, more subtle than the poems in the previous collection, and more striking for their silences, whether in the final lines of the poem “inside,” or the end of the first poem in the sequence “seedpod microfiche” (a sequence which appeared previously as a chapbook through above/ground press) that reads: “there is, my love, / a stethoscope whose end / is nowhere / whose earpieces / are everywhere [.]” It is as though the force of the writing comes through specifically because of the quieter, more subtle voice he engages within this collection, and we can’t help but lean in to hear.

a baboon rents a canoe
then smashes into the moon

as you breathe your lungs fill with
moon, baboon, canoe

moon, baboon, canoe
inside each breath

people who I love, you say
people about whom I care

I’ve long considered the best of Barwin’s work to include an intriguing blend of the work of Canadian poets Stuart Ross and David W. McFadden, and perhaps that idea is more true than I might have considered, given the deep and quick intimacy his poems allow, mixed with observational humour, deceptively simple language, the occasional large concept and side-step into surrealism. Barwin’s poems also manage to do that most difficult of things: to bring entirely new perspectives to what is completely familiar. As he writes to open the poem “push and pull”: “the accordion flies aloft / it cannot rise // the accordion has nothing / neither locks nor teeth // it seizes the world / is imprisoned // it does not escape / does not live or die[.]” With this, one might suggest that Barwin’s poems are big enough to encompass and include the entire world.