I want to say: this is a tale of redemption. But it isn’t.

When I wrote the book about my junkie father, the stories moved out of me.

Now, where will the cat girl’s daughter’s stories go? 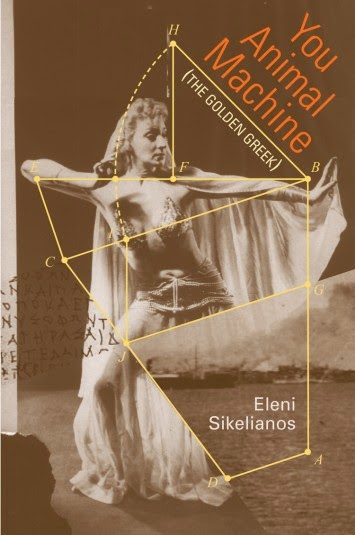 American poet Eleni Sikelianos’ new creative non-fiction memoir is You Animal Machine (The Golden Greek) (Minneapolis MN: Coffee House Press, 2014). The author of seven trade poetry collections, including a “hybrid memoir,” The Book of Jon (San Francisco CA: City Lights Books, 2004) that she composed on her late father, this new book focuses on the complicated life of her maternal grandmother, Melena, who married five times, had three children, was an infamous burlesque dancer, and rewrote her life constantly to suit her purposes and situation. Existing in a lost space, Sikelianos’ memoir works to reclaim an incomplete story, attempting to excavate, explore and articulate what had been lost, forgotten and even deliberately hidden. Writing of her grandmother as “the toughest, hardest-assed woman to ever eat wood and bit nails,” Sikelianos is the archaeologist seeking to connect the fragments of an impossible map, and yet she is fortunate enough to have an enormous amount of information on her late grandmother’s life, from multiple stories passed down from various family members, to an array of posters, fliers and clippings of Helena’s life in burlesque, a number of which are reproduced in the book. The book even includes an appendix at the end, allowing two of Melena’s three daughters to “respond to the book about their mother,” allowing Sikelianos’ version of Melena to not automatically overpower and even replace any other possible versions.

While my grandmother’s paternal great-grandfather was making millions in ragpicking, dime museums filled with taxidermy, gambling devices, human freaks, and lady dancers kicking up their heels in the back were paving the road to my grandmother and her burlesque.

What speaks to me is the curl of her foot. Our spiritual guides are beautiful women in sequined halter tops who teach us how to have a good time. Under the Salomé veil is the divinity of sex. Belly, breasts, waist, thighs, hands, neck, the angle of her head is a question, the question mark an invitation. There is something hiding in the shadow between shoulder and clavicle: dark, the father, the closet. Her eyes are angled toward the corridor from which someone will enter. Something is tangled up between this life and the next. She is urging him to get up and come to her (but not unless it’s after the show and he’s willing to pay). You don’t get to touch. Harry, you get to think of touching the soft skin of the inner thigh: it’s a contract between her and the forty men in the smoke-filled room. The hip slides in lazy circles, flesh moving gently over the bone: all of the Orient between her hips, a small sea of inviting flesh. What is she thinking of? The man who wants to touch her? The wad of bills she has to give to the club owner, the mobsters, the cops? Have her kids eaten dinner? Something more brooding, some black cloud over the brain? The men at the bar drink until they love everybody or fight. This is the story of what slides between the Leopard Girl and the men watching her. This is a miniature history of the way women are watched.

Someone said, it is not pornography until there is no more expression of particulars. When the details of the woman dancing under the lights—the elegance of her leopard’s hand, her curling fingers, the arch of her foot—are lost. (The leopard loses its hunger—its true animal nature—the moment I crop it to one eye and an ear.) Dora Vivacqua, la Luz del Fuego, the naked snake dancer, was assassinated by a religious fanatic at her nudist colony (a little island on which only the unclothed were allowed) in 1967. Perhaps it was the end of burlesque.

A book of outcasts, Sikelianos’ poetic memoir is a remarkable exploration of personal history, the fluid nature of identity, and the impossibility of knowing everything about anyone, especially someone as complicated, changing and deliberately slippery as Sikelianos’ grandmother, Melena. Writing such a book on a straightforward character would be difficult enough, and Melena certainly didn’t make such a thing easy, almost allowing for the fluid approach Sikelianos takes, moving across and through her material, as much the patient and detailed archivist as the granddaughter who simply knows some questions might never be answered properly. Through You Animal Machine, Sikelianos’ archival quest for family comprehension is reminiscent of some of the work of Susan Howe, such as the prose sections of That This (New Directions, 2010), or Alberta poet Monica Kidd’s memoir Any Other Woman (NeWest Press, 2008). As powerful as The Book of Jon was, You Animal Machine is a far stronger, and more complex work, one that plays with the form of the lyric memoir, and manages to provide a deeply compelling portrait of a feisty, fiery woman who lived fully and without apology, and rewrote herself constantly for the shifts in her situation. Just who was this woman, once known as “Melena the Leopard Girl”?

What does it mean to be a wife?

A wife of what?

It just didn’t work out for her.

Did she kiss the little man in the morning? Or grumble about the coffee, hoping he would take care of her, bring her coffee in bed? But it didn’t turn out like that; or it did but it didn’t please her in the way she had hoped

I’m trying to make sense for her, build her a net that connects to everything, let her slide around in an elegant way in daylight.

My mother was indeed a slippery, changeable shape-shifter. You appear to have grasped that from Eleni's descriptive and magnetic history. Kudos.