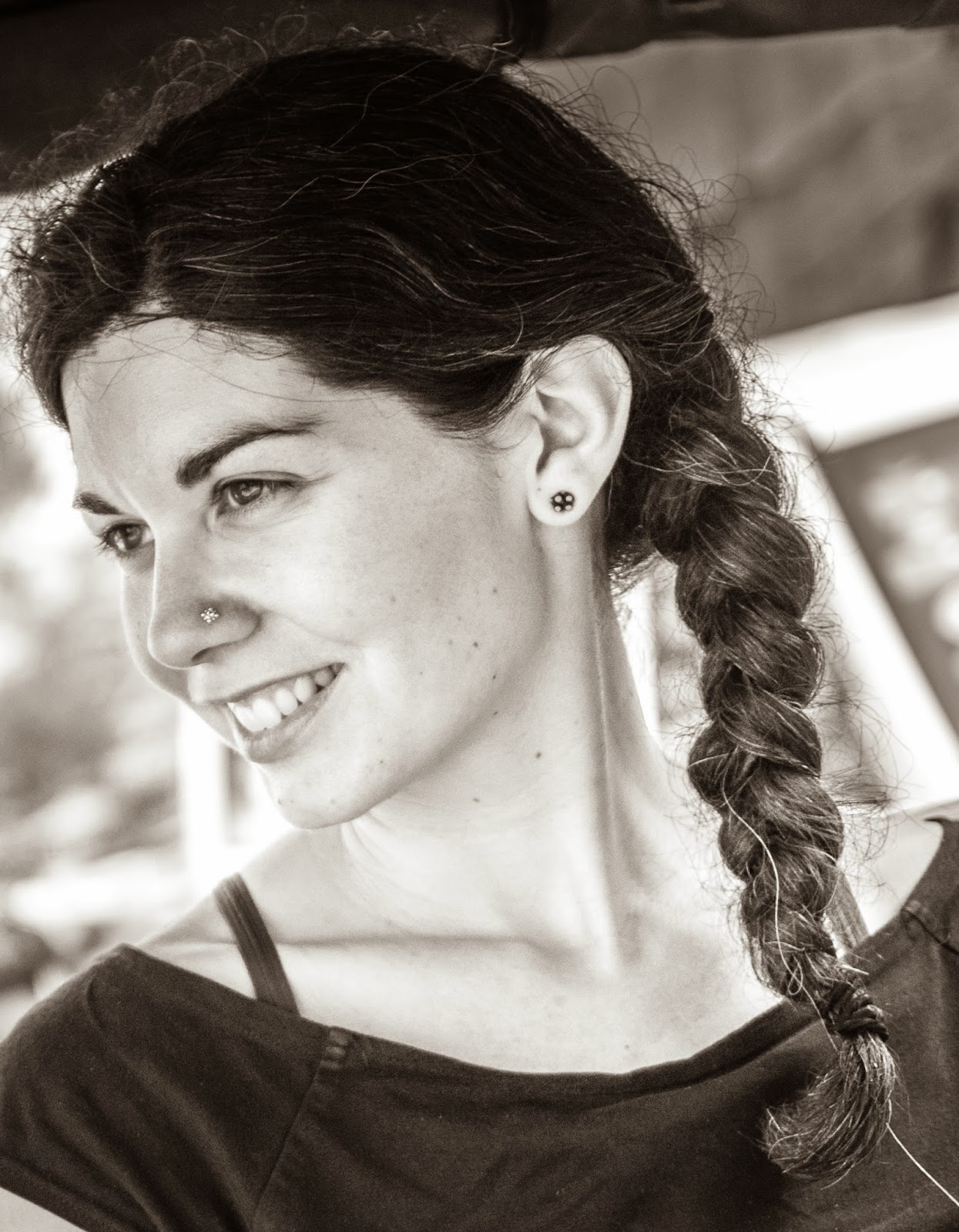 Poet and essayist Sarah Heady writes on human geography, American history, and the built environment. She is the author of Niagara Transnational (Fourteen Hills, 2013), winner of the 2013 Michael Rubin Book Award in poetry. Her manuscript "Corduroy Road" was a finalist for the 2013 Omnidawn Poetry Chapbook Prize. Sarah is a founding member of the New Philadelphia Poets, a writing and performance collective whose work was featured at the Philly Fringe Festival, the Bowery Poetry Club, and the Kelly Writers House. In 2013 she was a writer-in-residence at Art Farm in Marquette, Nebraska. A native of New York’s Hudson Valley, Sarah currently makes her home in San Francisco.

1 - How did your first book change your life? How does your most recent work compare to your previous? How does it feel different?
When I found out the book was getting published, it was so invigorating and validating. Kind of like coming in from building a snowman, and your mom hands you a cup of hot chocolate, and you drink it and get all re-warmed and then go back out into the cold. Which is fun too, but sometimes you just need a little shot of something to keep you going. It’s been about six months since Niagara Transnational came out, and those months have been some of the most exhilarating in my life—I have a lot of energy to put feelers out into the world, and I’m more confident as an artist and a human being.

2 - How did you come to poetry first, as opposed to, say, fiction or non-fiction?
I’ve written poems since I was a kid, but I think I actually started with stories. I wrote a sci-fi book in second grade called Invaders in Chicago, about an alien takeover. Then there was my Holocaust poetry phase in middle school. I haven’t kept up an interest in either of these subject areas.

3 - How long does it take to start any particular writing project? Does your writing initially come quickly, or is it a slow process? Do first drafts appear looking close to their final shape, or does your work come out of copious notes?
I typically write poems in a sort of furious free-writing trance, and it takes me a very long time (usually many months) to revisit and polish them. And most of those will never make it into a book; they’re just practice. The ones that make it will do so because they are circling around something larger, I guess. I try not to revise poems to death. If I make big changes, it’s in the form of shaving away the excess shit from the good stuff.

4 - Where does a poem usually begin for you? Are you an author of short pieces that end up combining into a larger project, or are you working on a "book" from the very beginning?
Poems come either from sound in the air or from an existing historical source I'm working with, maybe both. In the case of my first book, they came from vintage postcards. I don’t know. I’m too new to this to have a pattern yet. I’m terrified of putting together my next manuscript. But yes, right now I'm in "project" mode.

5 - Are public readings part of or counter to your creative process? Are you the sort of writer who enjoys doing readings?
I adore readings, maybe because they’re the only performative act I can handle without panicking. I have a deathly fear of acting, for instance. So I feel like more of a whole person when I can capably get in front of an audience. And when you have an audience that’s really listening, it’s the best feeling. I am so honored by people’s willingness to give their attention to my art.

6 - Do you have any theoretical concerns behind your writing? What kinds of questions are you trying to answer with your work? What do you even think the current questions are?
My overarching concern seems to be one of place—why does our physical environment look the way it does? It’s a process of historical excavation, and it sucks almost everything into its vortex. Sometimes I feel ill thinking about it, other times so grateful for even having a world to dig through. I think that sound (poetry) can be a little flake chipped off a monolith that glints in the sun for a moment. That’s all.

7 – What do you see the current role of the writer being in larger culture? Does s/he even have one? What do you think the role of the writer should be?
I don’t really see the writer’s role as being different from any other artist’s. Our only job is to say, “Here, look at this (i.e. try using your brain this way) and see what happens.” If society doesn’t value that kind of action, it’s everyone’s loss.

8 - Do you find the process of working with an outside editor difficult or essential (or both)?
I’ve never really worked with an editor except once. It was incredible. I hope to have that experience again.

9 - What is the best piece of advice you've heard (not necessarily given to you directly)?
You gotta let 'em breathe.

10 - How easy has it been for you to move between genres (poetry to essays)? What do you see as the appeal?
I’m actually working in both genres right now, but I’m finding it very difficult to balance them. I’d say the poetry project is suffering under the weight of the prose. Both have research components and I feel more pressure to get the essays “right.” They’re much more difficult for me to wrap my head around than poems. The essays are lyric, so they move like poems, but I also want them to function as “proofs.” That takes work.

11 - What kind of writing routine do you tend to keep, or do you even have one? How does a typical day (for you) begin?
I’m sort of floating without a routine right now because I’m in grad school and it’s hard to settle into something. Previously, though, I have tried to free-write by hand for at least 20 minutes per day. That’s what I aspire to.

My day? Typically if I don’t have anywhere to go, I’ll sit in my backyard and eat breakfast and read for a few hours in the sun. But most mornings I hop on my bike for my commute down the beach, around the lake. It’s lovely, but far too fucking early. I try not to think about it.

12 - When your writing gets stalled, where do you turn or return for (for lack of a better word) inspiration?
I work with some found material and do an erasure or something. Or maybe switch genres. Or just screw it and take a walk on the beach.

13 - What fragrance reminds you of home?
Indoor: sautéing garlic. Outdoor: freshwater (stream, lake, river) with a bit of funk.

14 - David W. McFadden once said that books come from books, but are there any other forms that influence your work, whether nature, music, science or visual art?
Maps, urban planning diagrams, postcards, old etchings, old photographs, blueprints. I like working with collage, and I’m teaching myself how to alter books. It’s important to play in another medium.

15 - What other writers or writings are important for your work, or simply your life outside of your work?
I’m a history buff and most of my writing incorporates research, so I read a lot of American history, urban history, architectural treatises, vintage advertising, etc. It’s extremely difficult for me to read a text in one of these subject areas without being compelled to incorporate it into my writing—in other words, to draw a line between satiating my curiosity and creating new stuff. It’s maddening, trying to figure out how to live.

16 - What would you like to do that you haven't yet done?
I wish I could clone myself and have one me that does real adult things like raising children and cooking decent meals on a non-sporadic basis, and another me that reads and writes. And I’d like to learn to speak Dutch. Not sure which clone would get that assignment.

17 - If you could pick any other occupation to attempt, what would it be? Or, alternately, what do you think you would have ended up doing had you not been a writer?
My original plan was to work in museums. Museums were always my favorite places in the world as a child, and I majored in art history. I wanted to be a museum educator or a curator. I broke that off when I realized I hated the culture of the field. I’m not a good schmoozer because I’m far too blunt, and I’m not a good teacher, either. I’m terrible with kids. But I used to work in community arts education as an administrator, and I would love to get back into that. It still makes me want to cry when I think about kids making art.

20 - What are you currently working on?
Poetry-wise: a book about women in rural contexts, partially made with found language from farmwives’ magazines of the 1910s and ’20s. Nonfictionally: a series of linked essays about the Hudson River Valley, 9/11, John Jacob Astor IV, and first love. You had to be there.

I found this interview so refreshing and alive! "It’s extremely difficult for me to read a text in one of these subject areas without being compelled to incorporate it into my writing—in other words, to draw a line between satiating my curiosity and creating new stuff. It’s maddening, trying to figure out how to live." Thank you -- and Sarah.
tk