The year before, Tsuburaya had forced Tanaka to go see his beloved King Kong, which had just earned four times as much in its worldwide re-release as it had originally, and Tanaka had also been impressed by the global numbers for Warner Brothers’ The Beast from 20,000 Fathoms, the story of a dinosaur thawed from its hibernation by American nuclear testing in Baffin Bay.
The United States government estimated that 856 ships in the Japanese fishing fleet had been exposed to radiation, and that more than five hundred tons of fish had to be destroyed, and offered a settlement for the survivors that the Japanese government declined to accept. Tanaka recounted that it struck him as he looked out over the Pacific below that the stories could be combined; and for the rest of the flight he scribbled on the back of a folder that his seatmate had lent him the outline of a story in which a prehistoric creature was awakened by an H-bomb test in the Pacific and then went on to destroy Tokyo. 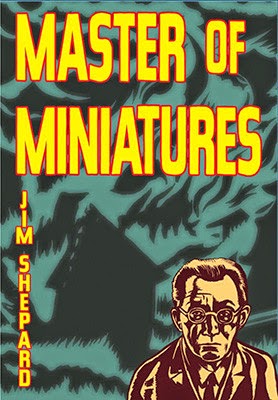 Prior to receiving a copy of his short novella, Master of Miniatures (New York NY: Solid Objects, 2010), I’d not heard of American writer Jim Shepard, author of more than a half-dozen titles of prose (including, apparently, the novel Nosferatu, which imagines the life of filmmaker F.W. Murnau). Emotionally complex, haunting and deceptively straightforward in terms of narrative prose style, Master of Miniatures writes out the story of the filmmaker Eiji Tsuburaya who, almost immediately after the ends of the Second World War, wrote and directed the original version of the now-legendary Godzilla, released as Gojira (1954). While imagining the details of the protagonist, Shepard’s novel manages to encompass in a remarkably short space the details of the film’s creation, which itself works through the savage trauma of an entire culture and country, and that of a single character, from Tsuburaya recollecting his father’s survival of the “great earthquake” to the bombings of Hiroshima and Nagasaki that ended the Second World War. Through his own attention to miniature, Shepard writes out Tsuburaya’s miniatures, through which the filmmaker was able to respond to the large wounds that existed across both him and his country, even while managing to lose sight of his own life, and that of his wife and children. Through attempting to remove a dark stain or shadow that couldn’t be removed, it is as though Tsuburaya simply created yet another, even while managing to create a new cinematic form, still deeply embedded in American culture. Shepard’s descriptions of the 1923 earthquake is quite chilling, and it is interesting that it is here that Shepard decides to focus some of the worst images on this event, as opposed to possibly-expected depictions of post-bombing Hiroshima and Nagasaki.

Two policemen agape on a refugee’s cart were blown away. Tsuburaya’s father was knocked down and blasted along the ground until his hand caught onto something. A teenaged girl on fire flew by over his head. Human beings all around him were sucked into the air like sparks. He shut his eyes against the wind and heat. A tree was wrenched from the ground, roots and all, before him, and he crawled into the loose earth and was able to breathe. Some ruptured water mains there had created a bog, and he tunneled into the mud.
When he revived, the backs of his hands had been turned to the bone. Everyone was gone. The skin atop his head was gone. His ears were gone. Something beside him he couldn’t recognize was still squirming.

Through Master of Miniatures, Shepard writes out a man who masters both filmmaking and miniatures, as well as a number of personal losses from which he can never recover. Shepard shows just how much the trauma of what Tsuburaya had lived through had permanently changed him, a realization he doesn’t entirely comprehend, and one that he begins to suspect far too late. This is a deeply fulfilling and unsettling novel, one that doesn’t end well or let easily go.

In the rushes of the final scenes, Honda noted how sad Gojira looked when he turned from the camera.
“That’s the way I made the mask,” Tsuburaya reminded him.
“No,” Honda said. “The face itself is changing through the context of what we’ve seen him go through. By the time the movie ends he’s like a hero whose departure we regret. The paradox of fearsomeness and longing is what the whole thing’s about.”
“I wouldn’t know about that,” Tsuburaya told him.
“It’s like part of us leaving,” Honda said. “That’s what makes it so hard. The monster the child knows best is the monster he feels himself to be.” After Tsuburaya didn’t respond, he added, “That’s why I love those shots of the city after the monster’s gone. All that emptiness, like a no-man’s land in which eloquence and silence are joined. If you don’t have both, the dread evaporates.”
That was true, Tsuburaya conceded. He volunteered that he was particularly proud of the shots of the harbor at night before the creature’s eruption from the sea: all along the waterfront, silence. Silence like thunder.