Basil is very temperamental./ I’m sorry, I have no idea how to make a TV./ Find a library, sweetheart, please./ Intact.

If all resources fail: bleach./ Learn to can/fruit, vegetables.

Flamingos,/ to read, / that we love you./ Rhinoceroses./ Poplar trees have sunscreen (SPF15) on the south side.

The sun rises in the east and sets in the west./ The longest day of the year is June 21/shortest December 21.

Our city was so glorious, but not so much as this sky.

You need songs. You can make your own./ I hope there are books./ I hope you find this one.

Learn to hunt./ Your Mum and Dad have been vegetarians, but never for the sake of your life./ Arrows and spearheads.

Then there are the stories I can’t tell you./ Lying under a piano listening to Satie./ Yr Father lay under the piano/as a child in the park.

My Darling Dearest, first-aid kits are frivolous until you need one./ I’m sorry./ Eat strawberries (I dreamt about them last night.) 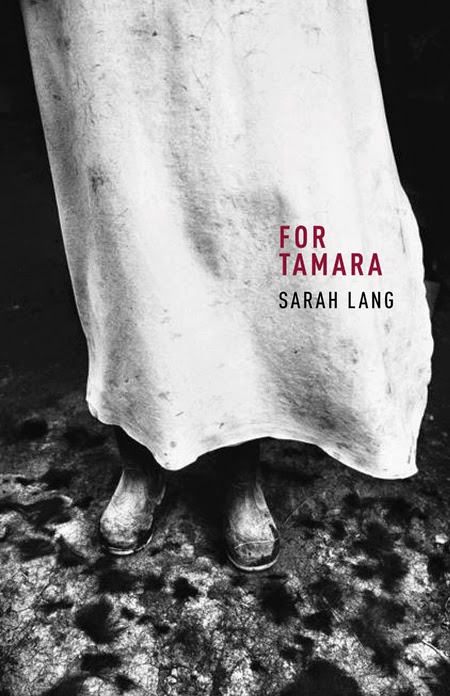 For anyone who might have picked up a copy of Sarah Lang’s first poetry collection, The Work of Days (Toronto ON: Coach House Books, 2007), her second trade poetry collection, For Tamara (Toronto ON: Anansi, 2014), almost appears to be composed by an entirely different author. The fragmented prose-passages that make up For Tamara are composed by an unnamed narrator to her daughter in a post-apocalyptic landscape in which the two have been separated for reasons that aren’t entirely made clear. For Tamara is composed as a series of letters and letter-fragments to the young Tamara for her future use, if she might ever discover them. It’s a curious question as to why Lang decided to form the book as poetry instead of a novel: Bram Stoker’s original Dracula, for example, was infamously composed as a series of letters by various of the book’s characters and presented as a whole as fiction, but there really haven’t been that many examples of poetry composed as such, especially given the rare overlap of poetry and science fiction. As Edmonton poet and critic Douglas Barbour, himself a fan of the rare place where poetry and science fiction might meet, writes in his own review of the collection:

That For Tamara was published in the same month as the I.P.C.C. released its latest statement on the looming crisis of global warming seems only fitting. Whatever broke the narrator of this powerful fragmented tale, a war, storms that destroy cities, something else, she lives, & writes note to her daughter & her missing husband in the stark aftermath.

Lang has created a fascinating form here, of quickly dashed off thoughts (by the narrator, not the writer), scatter-shot bits & pieces of her memories & ideas. She attempts to remember useful information for survival, makes references to the lost past, & declares her love for Tamara, & for her missing husband, who ‘worked all over the world. / CERN, LHC, Arecibo / and a handful of National Labs where he is now,’ & where she hopes he is still alive & trying to fix things. But, as the title implies, she is writing all this as a kind of survival guide for Tamara, who she hopes will read it all sometime in the future, & who may well have heard much of it as she grows up in a new wilderness full of the remnants of humanity who may have gathered around her, because, although ‘Before this, your Mother was a writer. / Now she is a doctor & teacher. / I suppose this still counts as writing.’

Part of what appeals about this book is exactly the discomfort that her form brings: is this poetry? Should this be poetry? Is this the best form for this kind of dark, post-apocalyptic narrative? Perhaps yes, and perhaps no, depending on how one might approach the work, and might even become a collection known for extending the boundaries of what poetry allows. For Tamara is a dark work, set against a backdrop of some unnamed, unknown civilization-destroying event or series of events, but one that is filled with its own kind of optimism, perseverance and pure will, and a book that will be rewarded with multiple readings.

Tamara, while I want you to be understanding, set boundaries.

You put your fingers in everything./ You want to be a part of everything./ I think yr grandparents would be proud.

Mum doesn’t want to work until 4am/0400./ But she has so much to tell you, and it isn’t like a baby book./ It is how to survive./ I should be making ink prints of your feet or some crap.