Sarah Manguso, The Guardians: An Elegy,

The problem with dying in private is that the rest of us don’t get to watch it happen, and things that happen without us seem less real, not quite finished, maybe even impossible.

If Harris had died slowly, under a beautiful lace-trimmed coverlet, with stage four something or other, and if a yellow light had been burning somewhere in a far corner of the room as we quietly cried, and if everyone had had a chance to say goodbye or otherwise get to narrate the end of the story, then maybe I could believe that Harris is better off dead and freed from his torments.

After your friend throws himself in front of a train, you tell the rest of your friends that you love them in case they all throw themselves in front of trains before you have a chance to say it. Maybe you’ve said it to them before, but you do it again, just in case, as if giving them permission to forego the lace coverlet and to die as Harris actually died—as if to say that with the lace coverlet, it would be easier.

In her fifth trade book, The Guardians: An Elegy (New York NY: Farrar, Straus and Giroux, 2012), American writer Sarah Manguso has achieved a rich and varied elegy to a friend who escaped a mental hospital in 2008, and committed suicide by stepping in front of a train. The Guardians is a book that provides a shape to her late friend, and a shape to her grief, writing out his illness and his health, their shared history of intimacy, writing out a background of growing up, New York during and following the 9/11 attacks, and the toll that mental illness takes.

One month after the attack, while I rode the subway to the office of the New York Post for my first day of work on the night shift, the United States and Britain launched air strikes in Afghanistan.

I didn’t work on the cover story, whose headline was Tali-BAM!

I was assigned the article about the Franciscan rite of the blessing of animals, which also happened that day. All the depressed rescue dogs were brought to the church and taken up to the altar.

At St. Bartholomew’s, a bald eagle led the procession, followed by the police and rescue dogs. The article accompanied a picture of a bloodhound named Chase sitting at the altar to receive his blessing, so I wrote the caption Heavenly Hound.

Six weeks after the attack, at the site no one spoke. The crater was still smoldering, and its poison smell filled the air. Some people wore gas masks and some didn’t. They walked among each other like the uniformed members of opposing teams.

Some of the stores in the neighborhood were open and clean. Others had been abandoned. Makeshift bars crossed a lingerie shop’s broken windows, the panties in the vitrines scattered and covered with an inch of fluffy gray dust. My black coat and shoes were gray, too. The fire trucks drove the streets unwashed and covered with red names drawn in the dust with a finger.

After the press conference when he was asked How many? and he answered More than any of us can bear, the mayor assumed the charisma of a movie star.

The fire burned until February, and by then the Stars and Stripes had sprung up all over the city, a tri-color weed nourished on ambient fear. 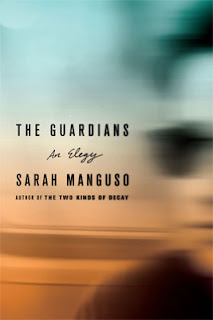 What appeals about all of Manguso’s prose is the stripped-down clarity she projects, beginning with her short story collection Hard to Admit and Harder to Escape (San Francisco CA: McSweeney’s Books, 2007) to her memoir on years of illness, The Two Kinds of Decay (New York NY: Farrar, Straus and Giroux, 2008). Even while writing about enormously difficult events and situations, Manguso’s prose projects such a calmness, fearlessness and clear-headedness, never lapsing into sentiment or wallowing. Still, The Guardians is a book that doesn’t let the author off the hook for her friend’s death, despite the impossibility and futility she knows of such self-blame.

The Guardians is a memoir about Sarah Manguso’s relationship to her friend Harris, who committed suicide by jumping in front of a train in New York, and some of the emotional aftermath of that act, but is far more than that, just in the way that Ianthe Brautigan’s You Can’t Catch Death (2000) was not merely a book about her famous father’s suicide. The Guardians also writes about the aftermath of New York after 9/11, the aftermath of leaving the United States for an extended period of silence, and what it meant to return home to this death; this book writes of the agony of home, leaving and hope, the man who would become the author’s husband, and even incorporates some fragments of one of Manguso’s self-claimed failed writing projects.

It might have been in an interview, but I recall hearing Manguso claim that she doesn’t necessarily assign genre to her projects as she works, thus opening her projects up to become more. Somehow, Manguso manages books that explore and describe how it is to live in the world, and how to be better at it, composing passages on love, friendship, illness, suicide, leaving, intimacy, marriage and death, and the moment of asking her late friend’s parents permission to even begin. As in all of her works thus far, this book is about and requires a strict attention. It would be impossible not to be moved.
Posted by rob mclennan at 9:01 AM
Labels: Farrar Straus and Giroux, Ianthe Brautigan, Sarah Manguso