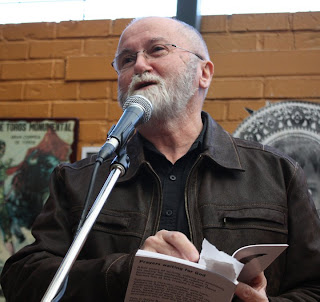 Andrew Burke is an Australian poet who has lived most of his life in Perth. After his birth in Melbourne in 1944, Burke's family moved west to expand the family business. In his teens, Burke read Kerouac and Ginsberg and other 'Beat' writers, and they gained his interest more than the literature he was studying at school. He aped their style in all he wrote, and published his first short story at 18. He has written on a daily basis ever since—stories, plays, poems, and—to feed family—advertising material and videos, annual reports and press releases. From 1990, Burke taught creative writing and allied subjects at universities, TAFE colleges and writing centres. In 2006/07, he and his wife Jeanette travelled to China where they taught at Shanxi Normal University, Linfen, and, on their return, they taught indigenous children at Wanalirri Catholic School in The Kimberley area of North West Australia. He now dedicates life fulltime to writing. His most recent publication is Shikibu Shuffle (above/ground press, 2012), a collaboration with Canadian poet Phil Hall.

On the Tip of my Tongue

My first book was called Let's Face the Music and Dance and was published by an academic at West Australian Institute of Technology, which has since become Curtin University. WAIT was going to have a press and had accepted by slim volume for publication, but the hierarchy stomped on the press before it began. So, the head academic published it - kind of him. I was young and expected it to change the world or at least gain a little attention. N F Simpson's play title A Resounding Tingle springs to mind! It took six weeks before a mention appeared in the local press - and it was patronising and snide.

Comparing my recent work to my previous work is positive: I seem to keep progressing. I do keep trying out new poetics and stepping into deeper waters, so for all its failings - and Beckett was right when he said, 'All art is fidelity to failure' - my new work shows greater confidence in my own craft and a continuing quest for new ways to say things.

Interesting question. As a reader I'm not sure that I did. I originally noticed Milton when I was about 12 or so, and noticed the power of the sonnet through his work. I also loved song lyrics since I was knee-high-to-a-grasshopper, especially clever ones like Col Porter, Rogers and Hart/Hammerstein, Gilbert & Sullivan, Hoagy Carmichael. But I read everything as a child - I actually consumed libraries to the point where I had to get a special card to read the Adult section as well - of three districts' libraries and the school library. An English teacher praised my writing when I was around fourteen (a short story) and then a further teacher introduced us all to Eliot and Gerard Manley Hopkins - and I was hooked. When I read Kerouac and the Beats, plus Artaud and Genet, I became a 'weekend Beatnik', complete with goatee, bongos and hip-slang-riddled poems.

But I have also written and published a novel, short stories, plays and songs. Poetry is my first love.

Well, once I know I am in 'a project' I close up. It is not so good to write consciously, so I try to write by the seat of my pants. My 'creative writing' doesn't really work in projects; my 'commercial writing' does. First drafts are like an orgasm - from there I tidy them up a little, but I try not to over-edit  as it kills the original pace and impulse.

I never work on a book. They are all individual poems, sometimes following a theme or subject due to my life's daily focus, but never conceived as a series. This is a drawback with publishers these days, but it just can't be helped.

Yes, I enjoy doing readings. But now they make little effect on my writing - in days gone by I did write for readings, but the work became too conscious of instant entertainment for the audience. I don't do that any more - the quality of the poetry is what matters now.

Well, I do pursue other poets' poetics and try them out with my work-in-progress. What works, stays. My poems tend to be born from the unconscious so the answers they provide normally define the question that has been lurking below decks. The current questions, or themes, could perhaps be reduced to  the fundamental ones: creation and procreation.

Dreamers will save the planet, and poets and songwriters are the ones to inspire the scientists and community leaders to create that Utopia.

In prose, very useful. In poetry, depends on the editor involved!

9 - What is the best piece of advice you've heard (not necessarily given to you directly)?
'Get your bum in the chair and your words on the page.' Elizabeth Jolley, novelist. 'Take risks.' John Marsden, YAL writer.

It begins with walking the dogs, feeding the dogs, bringing in the paper, brewing coffee. Then reading emails, and either responding to them or triggering off some thoughts which leads to writing. During the day, while we shop and attend doctors and or dentists, etc, I keep a notebook and scribble down bits and pieces. From these, I often write a first draft when I next have time - early evening or early morning. If I am writing a prose project - novel or short story - I tend to rise and write before I do anything else.  That is the best time of day for me to write, so if I had my druthers, I'd rather have undisturbed early morning writing time.

I have writerly tricks to trigger off my writing. I avoid all kinds of outside stimulants, other than coffee.

Yes, of course. Music has a subtle influence on my rhythms, nature and science are often part of the content, and the visual arts are present at very levels - words on the page, the energy of abstract expressionism, the folk influence behind Chagall and like artists works, and the two forms of sculpture: built-up and carved-out.

They vary with time and fashion. At the moment, Rae Armantrout, Michael Ondaatje and prose poets. I often return to Apollinaire, Catullus, Li Bai, Du Fu and Galway Kinnell. I also dip in and out of Roddy Doyle, mainly for his lively dialogue and use of the vernacular.

I was a drummer and would like to go that path.

It was the first thing in my life I was ever praised for, so I guess that influenced me. I have always read a lot and listened a lot - writing is a direct response to those activities I guess. And I am essentially a loner.

Money Shot by Rae Armantrout. Film I enjoyed a lot was Red Dog, a film based on a local story written up by Louis de Bernales, but not great. The last great one was probably The King's Speech - so well done in all aspects.

My 'New and Selected' entitled Undercover of Lightness, to be published by Walleah Press (Hobart, Tasmania) in March 2012. I am also launching an anthology soon, so writing a speech for that, and assessing an academic paper for a journal.