A question began to persist: If I’m a voyeur, are you, the reader, an exhibitionist? How do readers perform the private act of reading within the public realm, their preference for the written word on full display. The book becomes an invitation to look closer. And, just think, you have no idea what emotions may floor you from one sentence to the next, and when they do, I’m there, watching. I begin to imagine who each reader might be, and how the text they read would ultimately impact the spaces in which they live. (“Prologue”) 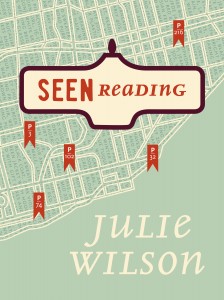 There is a part of Julie Wilson’s Seen Reading (Calgary AB: Freehand Books, 2012) that reminds slightly of Daniel Pennac’s wholly-underappreciated Better than Life (trans. David Homel; Coach House Press, 1994), in that both are books that explore ideas of reading. Reading, as anyone who has sat with a book or text anywhere knows, is a private act, but there is just something about the person at the next table reading that makes any good reader curious to know what it is that has them so enraptured. What are you reading, I might ask?
Originally posted online as a series of sightings, Seen Reading is a collection of micro fictions composed from witnessing people in Toronto reading in public, whether on the subway, on a park bench, or in a restaurant. Does that make her collection a series of meta-texts, composing ekphrastic stories triggered by another work? Her stories appear to focus less on the books being read than on their readers, strangers in passing she attempts to capture in short bursts of prose.

Woman and Parrot
Her grandmother’s Chrysler Imperial rumbled down the road away form the farm and into the city for supplies, leaving her, 12 years old, with a squawking parrot and a nearly blind woman scanning the excessively large print of Thomas Hardy’s Far from the Maddening Crowd. No pages to turn, she curled her shoulders forward, biting her nails, and clearing her throat to punctuate the silence, reminding the woman she was still in the room. She focused on the woman’s fingernails, soft pink and peeling like discarded clam shells. The parrot called for dinner. “Oh, balls,” the woman proclaimed, pushing herself back from the table, startled by the sudden surprise of a young stranger beside her.
READER
Asian female, 30s, with long brown hair under white knit cap, wearing blue peacoat and jeans tucked into white leather boots.
The Book of Negroes
Lawrence Hill
(HarperCollins, 2007)
p 87

In A History of Reading (Knopf, 1996), Alberto Manguel describes reading as “common acts of conjuring,” a wonderful kind of democratic and articulate magic, and Wilson’s explorations as “literary voyeur” highlight and celebrate the act of reading in an intriguing way—by responding in her own series of texts. David W. McFadden once talked about writing coming from writing, but might this be one of the rare texts that comes not directly from writing but from someone else entirely, reading? Wilson structures her collection of short stories into an array of sections, each with lyric titles such as “Regret had never been the thing he did, but the thing he did next,” or “She’d thought no pain, no joy, was exempt from fading, until this lingered,” most of which exist as short stories in an of themselves.
I can’t help but wonder: just how good is Wilson’s eye, that she was able to determine not only of every title and author, but publisher and edition, and even page as well? After her initial study, Jane Goodall-like notebook in hand, was there a brief conversation, an interview process to determine what exactly the person might have been reading, or was this all invisible, furtive, and possibly approximate? I suspect the latter. Either way, Seen Reading is an entertaining, compelling read, and an interesting consideration of just what people, publicly in Toronto, at least, are reading.

It Begins the Same
He’s a boy again, riding his bike, its wheels threaded with raw meat. The dog soon catches up and nips at his heels, drool wagging from its jaw. He pedals faster and loses his footing, the flesh of his ankle peels back to resemble the soft interior of the dog’s mouth. He pushes his heel to the dog’s forehead until it whimpers into submission. He rides off. When he looks down again, the dog’s teeth chatter loose the spokes, some studding in his calf, trailing red ribbons.
READER
Caucasian male, wearing black knitted cap with Canadian crest, Sony headphones, brown cords, green plaid dress shirt, and black West Beach jacket.
Slaughterhouse Five
Kurt Vonnegut
(Dial Press Trade Paperback, 1999)
p 48

Thanks for this, Rob, and for the other titles you mentioned. I'm going to grab those up.

To answer your question about how I collect and recall the details: compulsive repetition until I can find a piece of paper to pounce on (I don't carry a notebook anymore).