Heather Christle, What is amazing 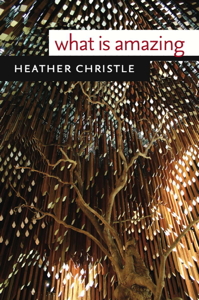 I’m fascinated by Northampton, Massachusetts poet Heather Christle’s third trade collection, What is amazing (Middletown CT: Wesleyan, 2012). A combination of a quick rush of breath and interruptions mid-line, the prose-poems in What is amazing celebrate the impossible, and stagger through her odd use of capitalizations to begin a new phrase, thought or sentence mid-stream.
The author of two previous collections with American small press Octopus—the collections The Difficult Farm (2009) and The Trees The Trees (2011)—the poems in What is amazing radiate with boundless joy and celebration, rich in an enthusiasm that so much other poetry lacks. As much as poets complain that humour in poetry isn’t taken seriously (works by David McGimpsey, Jon Paul Fiorentino and Nathaniel G.Moore), an outright, articulate joy and optimism appears to have even less consideration, and even fewer examples.

These poems are wonderfully fresh, and the syntax startles in such strange ways, electrifying subtle musings against the absolutely fantastic and banal. Her poems know full well how to live in the moment, and capture same. The only other example I can think of, of a poet known for such joy, is the late Toronto poet bpNichol. This is, somehow, one of the very few elements that the multitudes influenced by his work, despite numerous appreciations for his enthusiasms, haven’t entirely embraced in their own writing. Most of the poems in What is amazing are small enough to fit on a single page, but there are the occasional others, including the title sequence, where the possibilities of her lines are boiled further down. Highlighting the smallest moments, she straightens her startling syntax into meditations, lines as sharp as knives. The fourth of the four-part sequence reads:

Do you know anything about
how to stop disaster?
If yes go home and save
what little you have.
All of this rain
and nowhere to keep it.
You need one dozen buckets
and an extra box of candles.
What is amazing is how
the animals won’t stop sleeping.
It’s like sleeping is where
they hide their goals.
One’s goal in life sounds like
a match put out in water.
You might not know you’ve done it
but for the sudden lack of light.