This woman is Rita Joan Fawcett, then Rita Surry. She worked as a cashier in the meat department of the Hudson’s Bay store in downtown Edmonton. She was a dance club queen, and girl-about-town. It is 1933, and she is 23 years old, about to meet Duncan Hartley Fawcett, the man she will marry in 1936.

She’s a big-boned girl, buxom, pretty without quite being beautiful, but healthy and very well-groomed, always. Those are silk stockings on her legs, the watch on her left wrist will last 40 years, her manicure is impeccable but not ostentatious, and the necklace—are they real pearls?—is tasteful.

Her best asset is her smile, which could still light up rooms when she was 90, and made her friends all her life without making her seem goofy or an easy mark. Behind it was a quick and an encompassing sense of humour that didn’t require malice or schadenfreude to fire it up, and which masked her native shrewdness. There are no photographs of her in which she looks like a deer in the headlights, and I never saw her in real life that way. Her weakness was that she couldn’t see things coming. She only saw people coming, about whom she often made snap judgments that were rarely off the mark—and nearly always final. She kept her feet on the ground her entire life, and taught the skill to her children. This was no small accomplishment, given their very different characters. 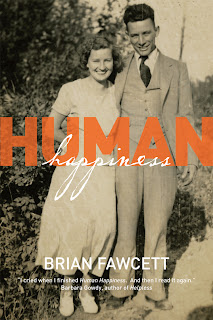 Nearly a decade in the making is award-winning Toronto writer Brian Fawcett’s courageous memoir of his late parents, Human happiness (Toronto ON: Thomas Allen Publishers, 2011). For years a journalist and public intellectual,Fawcett has been taking on big subjects through non-fiction, from his Cambodia:A Book for People Who Find Television Too Slow (1986), Gender Wars: A Noveland Some Conversation About Sex and Gender (1993) and Virtual Clearcut, or The Way Things Are In My Hometown (2003), to Robin Blaser (with Stan Persky; 2010) [see my review of such here]. His subjects have been large and small, and in this new book, the subject is his own parents, their marriage and the family they created. This is perhaps the largest and most difficult of subject matters, and Fawcett manages it with stark honesty, attention and humour, without a speck of sentimentality.

It is a difficult thing to turn one’s gaze upon the speculations of one’s own house, one’s own life, and Fawcett does it with alarming and straightforward skill. Human happiness is a warm, direct, honest exploration and heartfelt portrait of a couple existing of their own place, their own time. Over the years, his non-fiction works have concerned themselves with political and social histories, with calling out those who required it (otherwise known as a low tolerance for bullshit), and he approaches his parents’ history in much the same way. How does one comprehend their own parents honestly, and the contexts through which they became who they were?

As the title attests, this is a book about happiness, after all; about how it is sought after, discovered, and even about how it is perceived, amid the arguments, the long stubborn stretches and the misunderstandings (Fawcett’s scene of he and his brother in their father’s office as their father entirely misreads his two sons is astounding).

If attention might be called the highest form of respect, and even the highest complement, in Human happiness, Brian Fawcett has given his all.

There’s something else that makes all this worth the telling: the two central figures in this story literally couldn’t have imagined that a story could be written about their lives. They both had the sort of modesty of expectation that prevented them from seeing themselves as central to anything, even, at times, their own lives. They didn’t see their marriage as drama, or their lives as a narrative that had a fireworks-and-orchestra beginning followed by plot-point catastrophes and epiphanies, and they didn’t see its ending coming until it was on them even thought they both prepared for death in exquisite detail. They saw their individual lives and their marriage through the lens of a plan, one that they pursued relentlessly without talking about it very much, and except in moments they thought of as weakness, without looking back to see what had worked and what hadn’t.

This is also about the desire to find a human and humane happiness, about the goodness of the human spirit, about the unappreciated comedy of our expectations and it is about the will we don’t hear very much about these days. Not the will to dominate others, or make life about ourselves, but the often-interrupted will to love and be loved, and the contagious decency that arises from it.

My private moments? Like most people born in North America during and just after the Second World War, I grew up without the faintest curiosity about the people who’d brought me into the world, and even less about the ancestors who had gotten them to our staging grounds. Toward the end of my parents’ lives I began to understand that this lack of curiosity was a serious mistake, and in part, this book is my attempt at restitution: this is about them, but it is also for them.

I really look forward to reading this memoir, Rob. I sense it's as much a story about Fawcett's parents as it is about Edmonton. Stories about Edmonton. Go figure? Every story is worth telling