Just as this issue was getting ready to go to press, I read the deeply sad and shocking news of the death of Robert Kroetsch. I knew Kroetsch only casually, at best; I ran into him several times over the years at readings and other events and we'd say hello to each other. When I attended the Writing Studio at the Banff Centre in 1994, he was among the faculty there that year, teaching fiction whereas I was one of the poetry participants. Despite my being in the “wrong” genre, he generously read my poems and gave me encouraging responses and even some helpful suggestions. I'd earlier been feeling rather dejected about my poems because another writer at Banff dismissed them as being contrived. I mentioned this to Robert Kroetsch and he replied (gruffly, I'll add, very gruffly), “It's POETRY ...It's supposed to be contrived!” To my novice poet ears, these words were beyond wonderful...they were revelatory, and invaluable. My interpretation of Kroetsch's assertion was—still is—that you can make poetry (stone-hammer it if that's what it takes) into whatever you want it to be. For many months when I was first trying to figure out how to be a poet (I'm still trying to figure this out), I carried Kroetsch's Completed Field Notes with me everywhere—as a collection of constant reminders of what a poet can do, what a poet can make...indeed, contrive, yeah, that's the beauty of it.
TRUTH AND LIES, Grain's summer 2011 issue, is dedicated to Robert Kroetsch. I always think of Kroetsch as being the Master, The King, The Grand Poobah-Gardener if you will of the long poem. It seems fitting, then, that this issue features some astounding new writing by several poets who are working in longer forms or sequences, including Méira Cook, Sue Goyette, Susan Andrews Grace, and Kim Trainor, a poet new on the scene whose work, I have no doubt, you'll soon be reading more of. (Sylvia Legris, “Editor's Note”) 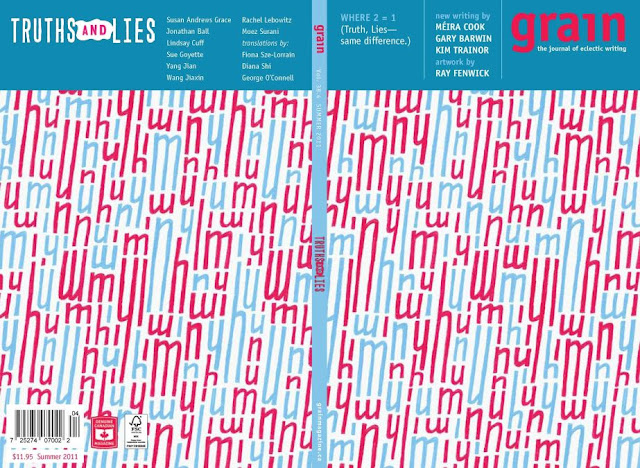 I'm disappointed that this issue of Saskatoon's Grain magazine, a quarterly published through the Saskatchewan Writers Guild, is Sylvia Legris' last as editor. I don't know why the the Guild would see fit to replace Legris, as she brought a quality, stature and visibility to the journal it had long been lacking. Subtitled “the journal of eclectic writing,” Grain has enjoyed a vibrancy it hadn't had in years, thanks to Legris, a poet best known for winning the Griffin Poetry Prize for her third trade collection, Nerve Squall (Toronto ON: Coach House Books, 2006). Through Legris, the journal was truly eclectic, acknowledging both the more linear narratives that have populated the journal throughout its history as well as an array of more experimental forms, by writers both established and new (it's worth noting that Chuqiao (Teresa) Yang, a young Ottawa writer I first discovered in the summer 2010 issue [see my review of such here] took first prize for her Grain piece in two categories of the 2011 Western Magazine Awards).
I'm disappointed she's leaving, and baffled at the move, with turns of outright anger. I can only hope that, with her tenure of editor over, she might return to writing. With only three trade titles to her name so far, she has long been one of my favourite Canadian poets, and I would like to see what else she is capable of.

I don't know that I believe in divisions between things. Between physical objects. Between people. The separations between things are, in some ways, working fictions. Yes, there are different “zones,” but I have this notion of everything being part of this huge protoplasmic unity. From galaxies to the insides of dogs and the undersides of sweatsocks. Do we really need cell walls? Don't things morph into one another, if only eventually? The same is true of concepts and abstractions. One person's unibrow is another's mantra. Someone's pain is my pain, though the self creates reasons to keep it at a distance. I want my writing to reflect the fundamental unipanrhizomatubuiquity between/of things. (Gary Barwin, “ON BETWEEN: ON WRITING”)

Part of what makes this issue compelling is the fact that Legris has selected sections from numerous longer works-in-progress (and a couple of shorter ones as well) by Gary Barwin, Méira Cook, Sue Goyette, Rachel Lebowitz, Moez Surani, Susan Andrews Grace and Kim Trainor that all include introductory statements. Why is it so rare for Canadian journals to consider statements? Calgary's dANDelion did such a few years back, and it was magnificent, with short poetic statements by poets Jon Paul Fiorentino and Julia Williams, among others. A particularly interesting statement comes from Sue Goyette, writing her “Agatha Christie's Eleven Day Disappearance: Her Fugue,” composing a poetic sequence imagining the lost days of author Agatha Christie in her sequence “The Silent Pool.” It seems odd to note that this same period was also fictionalized in an episode a bit ago of Doctor Who. Would Goyette have known that?

AGATHA CHRISTIE'S ELEVEN DAY DISAPPEARANCE:
HER FUGUE
fie, you silent pool
What they wanted to pull out was a woman. The water let them
try. They forked and combed it. Let loose the hounds.
The setting sun licked the poisoned dusk of this mystery
and sent them letters of despair. Her car was a slump
on the landscape. Someone thought to take pictures of it
and there's her shadow in one of them, lingering.
Then she disappears. Just like that. Can't we see the body?
her country begged as if they were 13-year-olds
at the barn door. If there was a body, it would be curved
like the bell it's been, grieving. Ring once for her mother,
twice for love. The lake wasn't bottomless. It was gentle
and, given the chance, would've taken her under
in the most delightful of ways. Like a bedtime.
And then a story.

Another highlight has to be Winnipeg poet Méira Cook, a writer who manages to regularly get onto the CBC Literary Awards poetry long-and-shortlists, as well as being author of a novel and four books of poetry, including the forthcoming A Walker in the City (London ON: Brick Books, 2011). Cook's work has a preference for longer forms, extending sequences that wrap through the entirety of her works, and her work included in this issue is “BEING DEAD,” a sequence of short poems. In her “NOTE ON BEING DEAD,” she writes: “I've always found it difficult to articulate what I'm trying to achieve in my poetry, a difficulty that is no easier to express even after I've supposedly achieved it by producing a poem. In this case, the title of the poem sequence, Being Dead, gives a hint of the subject matter—I think, I hope—but not necessarily what inspired it or why I chose the form I did.”

HIS RIBCAGE
A hull rocking on some warm, dark
underground current, sliding
through summer's deep crevices.
Give me a minute and I'll count to sixty
with the broad Mississippi flowing between
seconds like milestones on the river bank.

What else to mention? The featured artwork by Ray Fenwick, including cover art, has a lot going on in it, and forces the eye to stop for a moment. There are translations: six poems by Yang Jian (trans. Fiona Sze-Lorrain) and two poems by Wang Jiaxin (trans. Diana Shi and George O'Connell). Rachel Lebowitz has some magnificent prose-poems; I look forward to seeing her project, “Cottonopolis,” achieve completion, to see what else is possible through the cadence of her lines.

JAR
This is, after all, a new world. Iron brands, bands laid across meadow, fallow field. They say cow's milk'll turn sour at the sound. They say the speed will crush your lungs. They say you could lie a sleeper line of mangled legs along this track. Wheels turn, the hare flees, rain falls in sheets. Over a hundred bales of cotton in her sides. We left Liverpool this morning. Some years back, there were signs in her windows: Silver Locks and Collars for Blacks and Dogs.
We'll reach Cottonopolis next. The train's greased with palm oil. See it shine.
The gun goes off. Scramble!! Bodies shine. Slaves run, fling themselves overboard and are seized again. And later, we'll take this palm oil, this gold in a glass, and spread it on our trains and on our bread for tea.

Oh, rob, I completely agree about how Sylvia Legris has revitalized Grain and what a bloody shame it is that the Board didn't see fit to beg her to continue.

Under her tenure, the magazine attained a personality and a vibrancy (visually, tonally, etc)unusual in Canadian literary magazines (with exceptions, of course: I'm looking at you TNQ!)

Rob and Zsuzsi, so many of us here in Saskatchewan who are trying to move the bar beyond the horizon(tal) are equally stunned, angered and baffled. The fact that Grain is a program of the SWG, which "acts as publisher of the magazine and the editor reports to the board through the Executive Director of the Guild" is problematic. The SWG has become increasingly membership-driven, and is not a professional organization per se.