We decided on a number of things at the start: we wanted our investigation of the links between science and literature to be serious but not high serious, i.e. we wanted a playful element alongside the more sober investigation of ideas. We were charmed by the behaviour of quarks and by their partly utilitarian, partly fanciful names: Charm, Strange, Up, Down, Top and Bottom (known, for a time, as Truth and Beauty). What if we sent out a call inviting writers to come up with a “particle fiction,” a short work in verse or prose taking as its theme or title one of the beguiling quark names? (We thought there'd be a rush towards truth and beauty, but our poets were most disposed to casting spells, to charms and incantations). Those interested in the life sciences exhibited a playful bent as well. We discovered amongst their contributions a strange and comic bestiary of creatures large and small, sometimes opening a window onto human behavior and anatomy, sometimes shamelessly and hilariously anthropomorphized (see Bruce Taylor on tube creatures, Patricia Young on the sex lives of animals—both on the Arc side).
Elsewhere, we wanted to harness the energy of quarks by bringing in scientists and writers, scientific and literary rhetoric, into collision or conversation. We were interested in how literary writers (I mean a generic distinction here, no slight to writers of science fiction!) mine science for metaphor and its near cousin analogy nearly as often as poets do in order to explain what's non-intuitive or to convey something of their own wonder at the properties and behavior of animate and inanimate things. We were interested, too, in the idea of literature as experiment—both formal experiment and literal, the latter a new frontier pushed in this issue by Christian Bök, who is embarked on creating a “living” poem, encoding a verse of sorts into DNA and seeing how it mutates over time. (Kim Jernigan, “Welcome To This Issue,” The New Quarterly #119) 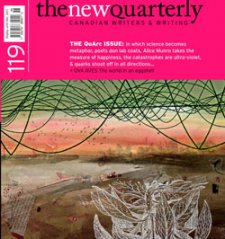 It doesn't happen that often, but there have been examples in the past of publications joining forces (the three publishers that brought out a Gerry Shikatani poetry collection about a decade back, for example), but it happens rarely enough that it's worth mentioning, such as Ottawa's Arc poetry magazine and Waterloo's The New Quarterly's newly-published conjoined “QuArc” special (as issues #66 and #119, respectively). After months of hearing about the project, it's good to finally see the result, an impressive and ambitious issue working to explore the connections between literary writing and science, writing and the natural world, revealing a whole wealth of responses, from an interview with Alice Munro on fictionalizing late 19th-century Russian mathemetician and novelist Sophia Kovalevsky and Matthew Tierney writing on clock radios and time machines to Christian Bök discussing language as a virus and poems from Sean Howard's electrifying work-in-progress, “The Shadowgraphs Project.” 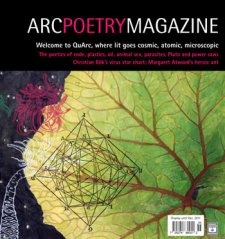 In his recent “12 or 20 questions” posted at Open Book, Toronto writer Matthew Remski mentioned ecology and the final Scream in High Park: “i listened to about thirty excellent writers expose themselves. only two wrote directly about ecology. […] are we that traumatized, that only two of thirty excellent writers can address the fact that the world is on fire?” Part of what makes this particular collaboration, this particular conjoined pair, apart from the focus on the meeting between science and art (something usually overlooked or outright denied), is in how each journal manages to respond from their own particular points-of-view while meeting, quite literally and, appropriately enough, in the middle.

Pentamerous
In your navel I found a five-rayed star,
just the way the cut was made,
pentamerous symmetry, like a starfish
or all those tiny marine creatures—
urchins, sea cucumbers—
cross-sectioned and held together
just as you were held to another life
and then not.
Hold still, my love,
that's what this morphology
is best for.
In the sediment that rains
constantly through the water
the particules of other lives
that touch you and feed you
or,
and I think I forgot to tell you,
that plants are the most pentamerous
of all
like an apple that you slice in half
no, the other way,
perpendicular to the stem
and then you eat the other half. (Monty Reid, from “Host,” Arc #66)