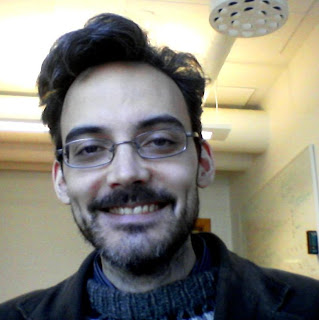 jesslyn delia smith is a recent Carleton graduate living and writing in Ottawa, and has had three chapbooks published through Carleton’s In/Words Magazine & Press. Her poetry and prose can be found on her blog, www.jesslyndelia.com, which is updated frequently. Feedback at jesslyn.delia@gmail.com or twitter.com/jesslyndelia.

Hugh Thomas [pictured] is a writer from Fredericton, where he is a professor of mathematics at the University of New Brunswick. Chapbooks of his poetry have been published by Paper Kite Press ("Heart badly buried by five shovels," 2009) and BookThug ("Mutations," 2004), with a new chapbook this month with above/ground press. A book of variations on Kafka texts, a joint project with Gary Barwin and Craig Conley, will be published by New Star Books in the fall. Hugh Thomas's poetry has appeared in a variety of Canadian small press periodicals, including 1cent, BafterC, CRASH, dig, fhole, filling Station, Hardscrabble, Peter F. Yacht Club, and Twaddle.

Dennis E. Bolen is a novelist, poet, critic and educator; author of seven books of fiction; his latest, Anticipated Results was described in Quill & Quire as '...a dance with clever language that both mocks and questions a generation’s legacy.'