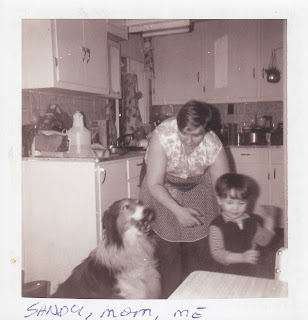 [early 70s me, with mother] A rough few days, my mother still fighting like hell, the iron will that, for whatever else, kept her alive over the past four decades. Sheer bloody-mindedness. The past two days, she's been in Ottawa's Civic Hospital ICU, the medical staff worried she wouldn't survive the night before last, given the weakness of her heart, her dehydration, and the difficulty of getting in a line. They had to take her off the anti-rejection drugs to fight off some kind of lung infection, so there became other concerns of losing the kidney she received about a decade back. After twenty-two years of kidney dialysis, it was only her third transplant that actually took, but the abuse she's taken over the years has given her a greatly reduced immune system. Can you imagine peeing again for the first time, after twenty-two years? Father and sister are there, and my sister is sending regular messages through her phone, via facebook. Updates I forward to the rest of the family, extended throughout eastern, central and south-west Ontario.
Thanks to a cousin who trained as a nurse, in last night for an update as well, apparently both heart and kidney are doing better, stronger. She's heavily medicated, and we're waiting to hear the results of the lung infection. She's out of the woods, perhaps, but a long stretch ahead, certainly. This is frustrating, but certainly not new. Have I mentioned she spent a third of the seventies and most of the eighties hospitalized? She used to arrive and run through her set-list of occupied rooms, whether she'd previously been in that one or not. Greet various staff.
An iron will, as I said. She's still here. She might outlive us all. It's always what I've wondered: she could either go any minute, or outlive the whole lot.
Posted by rob mclennan at 10:55 AM
Labels: mother, rob mclennan photo

rob, your mum is surely a brick! will pray for her and am thankful she has a loving family and good care. sending a big hug!

rob, stay strong and faithful. This is heart-breaking for you (and more, of course, space or place, we cannot never adequately communicate it). Please take my love and strength with you; you know, your telling reveals something vital about you: she lives forever in your iron-clad will. Pax. Jf