Creaturely and Other Essays, by Devin Johnston


This little book is largely made up of digressions, departures from a life spent too much indoors. In keeping with etymology of the word digression, I drafted these essays walking around St. Louis and its environs, where I have lived since 2001. As Henry David Thoreau would say, I acted for a time as self-appointed inspector of thunderstorms and starlings, sycamores and squirrels, making my daily rounds. Weedy species and volunteers – common forms of life, opportunists like ourselves – I took as my particular charge. I sought out their local haunts, imagining what they saw, heard, smelled, tasted, and felt. En route, a poem would often come to mind, my private anthology serving as a wayward field guide to whatever I found. In that sense, the poems quoted here are less objects of study than “equipment for living” (in Kenneth Burke’s phrase). 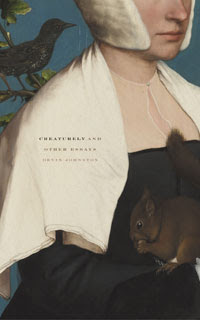 I like that, in the preface to his Creaturely and Other Essays (New York NY: Turtle Point Press, 2009), Devin Johnston calls his pieces “digressions,” short pieces walking and wandering and thinking, but not self-consciously so. Or, even when he is, through language and poetry, philosophy and just straight out walking with his dog, these eight essays hold the right amount of meandering and deliberate thinking, well read and moving through the spaces of his St. Louis. Lately I’ve been thinking about ideas on the pastoral and just what that means, and these essays provide an interesting sidebar, compelling counterpoint to that ongoing conversation. How does writing, thinking or philosophy relate to the actual world?

I am reminded of a passage in Basil Bunting’s poem “Briggflatts,” subtitled “an autobiography,” in which he enumerates the pleasures of the senses. Taste comes first in the list, followed by sound and touch:
It tastes good, garlic and salt in it,
with the half-sweet white wine of Orvieto
on scanty grass under great trees
where the ramparts cuddle Lucca.
The intimacy of taste sympathetically encourages an intimacy in the language, resulting in the apt but unexpected word “cuddle” applied to city fortifications. Yet at the end of this list, sight introduces a gap of self-consciousness that can never be mended:
It looks well on the page, but never
well enough. Something is lost
when wind, sun, sea upbraid
justly an unconvinced deserter.
Looking and writing are sure but distancing, Bunting suggests. We abandon full participation in sensual experience for its representation. According to the poem, “something” lost may be the smell of burning apple-wood or the twitter of a lark; meanwhile, the mason’s chisel “spells a name / naming none, / a man abolished.”

His classical references in these essays are quite exquisite, from Matthew Arnold, William Blake, Basil Bunting, John Clare, Robert Duncan, W.B. Yeats to Robert Burns, but doesn’t Johnston, a poet with three published trade collections of poetry, born the same year as myself, read anything contemporary? Aren’t there any literary references in his immediate temporal surroundings that relate to any of his wanderings at all? Not really a complaint, but more of a confusion. Or perhaps there isn’t anything he’s read from the past couple of decades that jump to his immediate mind. Otherwise, a lovely, worthy book I would certainly enjoy more time wandering around in.

At the edge of domestic life, yet undomesticated, the lives of squirrels glance off our own. There is traffic between us. William Butler Yeats captures this closeness in “To a Squirrel at Kyle-na-no”:
Come play with me;
Why should you run
Through the shaking tree
As though I’d a gun
To strike you dead?
When all I would do
Is scratch your head
And let you go.
The squirrel reacts with comic paranoia, as if every human action holds sinister implications. But gentle Yeats would hardly justify such fears. In his Reveries over Childhood and Youth, he recalls the origin at his dismay at killing animals: “I fished for pike at Castle Dargan and shot at birds with a muzzle-loading pistol until somebody shot a rabbit and I heard it squeal. From that on I would kill nothing but the dumb fish.” After the full rhyme of “head” with “dead,” the final off-rhyme of “go” with “do” carries the force of this conviction. It is a manifestation of letting go.

The “dumb fish.” I’m not sure the fish would see it as such. And I wonder, why is it that so much deep, important thinking has to take itself so seriously?
Posted by rob mclennan at 1:42 PM
Labels: Devin Johnston, Turtle Point Press

Nice review, Rob. I read this book a month or so ago and really enjoyed it. Nicely designed too.
Theresa Kishkan