another weekend in old glengarry; 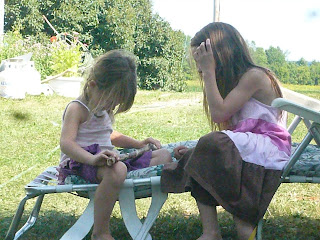 another weekend, wandering through the seemingly lush green of Glengarry County; Kate and I went down to the old homestead on Saturday, and spent most of Sunday sitting in my sister's yard. Nice. My little sister's the two girls spent part of the afternoon looking at an inchworm, and once the boy awoke, after eating, helped us build up the mound of wood-parts in the fire-pit.

There was a part of the afternoon the girls had strung up a Duncan-sized Barbie doll in the tree, upside down. Scary. Then they beat her with sticks. What was really odd, Kate telling me later that Rory (the younger of the two girls) sang to Barbie after beating her with sticks; were they working their way up to being cops, Kate wondered? Yipes; the singing detective, anyone? 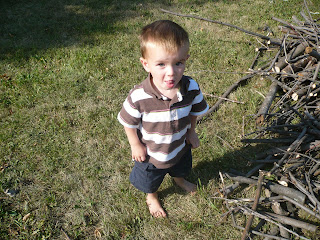 So much that I just don't understand. The parents get older, my sister's children get larger, and the bush around the homestead gets more and more overgrown, at least in the neighbour's property, letting it go back to bush, it seems. A nice option, I'd say. Means there's no one around at all, during any of it. The occasional 4-wheel engine noises from the other road...

And what is this about St. Elmo, Gordon Church (1864) trying to sell the Congregational Church (1837) to the Dunvegan Museum...?