Peter Norman’s At the Gates of the Theme Park


What He Found in the Vacuum Bag
Dust, great cotton-candy wads of it.
Three paper clips.
Human hair: his own and yours,
intractably entwined.
Five cents in pennies.
Veins and arteries of thread,
bloodless, unpulsing in the dust.
Crumbs of a meal you shared
with him, that night
when hope stirred bravely
in the candlelight, in the sure flow
of wine from a neck unstopped.
Fingernail clippings.
A pencil’s tip.
Charred wick and chips of cork.
Particles of sound: your chair
scraped back from the table;
voices, the mounting crescendo.
A busted thumbtack.
A spider asphyxiated.
Molecules and atoms, a ravelled mess,
a brood of dissonances made one. 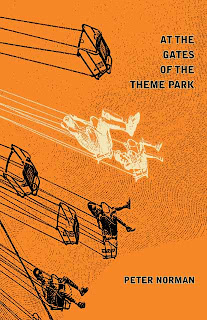 In Peter Norman’s first trade poetry collection, At the Gates of the Theme Park (Toronto ON: Mansfield Press, 2010), are poems that are not so much tight as bullet-proof, often lines that resonate on the page and nearly hum with energy. From publishing poems in The Peter F. Yacht Club, The New Formalist to the chapbook After Stillness (above/ground press, 2004) to this (as well as a novel forthcoming with Douglas and McIntyre in the new year), Norman’s poems maintain a fine line between play and restraint, something best seen in his sonnet/essay collaboration with Stephen Brockwell, Wild Clover Honey and The Beehive, 28 Sonnets on the Sonnet (Ottawa ON: The Rideau Review Press, 2004), a magnificent banter between the two poets that should have been more widely available (and hopefully, at some point, it will be).
Peter Norman is an explorer of forms, writing poems for/after such as Margaret Avison, Georg Trakl and even Stuart Ross, who later became his editor for this collection of first-person lyrics, each word carefully placed one after the other, relentlessly carved and carved down to the foremost bone, with the slight trace of Ross’ surreal influence. There are a lot of exquisite moments, little gems of beauty, but when does subtle become too subtle, too slight-of-hand? Norman’s strength, certainly, comes from the minute play of familiar forms, tweaked familiar but just out-of-focus, but there are moments, still, that these poems could have played more, restrained themselves less, and been allowed, perhaps, to stretch out a bit. Norman creates for himself a tension between this restraint and formal play, one that feels as though he is still negotiating, one that works with a wonderful ease in some pieces, and in others, feels as though the play should have been allowed more leeway. Where is the fun, the banter, the expressive wit of Norman’s poems from that collaborative chapbook? Why do so many of his poems in this collection have to sound so serious, not a single eye giving that quick, fourth-wall wink?

Stuffed
after Margaret Avison
Somebody stuffs the world in at my eyes.
It’s pre-digested: I just let it break
the antiquated locks on the optic doors. My rice
is grey as corpse flesh and my whisky quakes
when riot cops march by. Electric air
creates a raised-hair halo. Desolate,
I shunt my toys from gate to gate and bear
the unseen force of all that freight
crammed through lenses at the break of morning,
bleak as the Yangtze and the leprous welts
that huddle on its flesh as a kind of warning.
Abstract, the characters reveal little else
than a sad, inconsequential blur.
There is no change, no listener.

Signature of a great poet is revealed here.