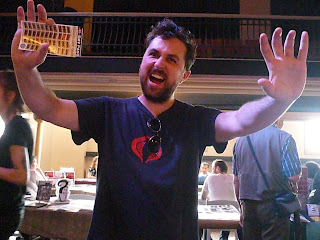 [Nathaniel G. Moore at the TSPF; and then he went to the movies.] I don’t understand why the literary community in Toronto still keeps such a wide berth from the semi-annual Toronto Small Press Fair; I mean, I understand why, but the current organizers didn’t even know about the “troubles” the fair had a few years back (one wasn’t even on the continent at the time, and the other wasn’t much closer to the fair). Those involved on both sides don’t even come near, so what I don’t understand, why does everyone else also stay away? The new Meet the Presses fair is a positive thing, but why this insistence on factions? Why can’t we all just get along? I am not interested in factions; here are a couple of the items I picked up at or around the fair this time around.

Toronto ON: Since discovering Sarah Pinder’s work at the previous Toronto fair, I’ve been quite taken with these small, graceful poetry and fiction chapbooks produced by her Bits of String, including Garden, Gardener: poems by Sarah Pinder (2008). Her poems are odd, quirky things, and her chapbooks are only two or three dollars; how can one not be charmed?

On pilgrimage, I post,
aim and erect.
Missing cotton, velveteen,
a purple bite, a powder-puff,
I make a mini regatta in
crisp paper and set them a-sail
in the trout stream.

There’s something charming, naïve and then not-so in her pieces (I like this one, shades of Richard Brautigan’s surrealism), and even the back page, writing “I made this in Hamilton, ON, listening to my neighbours set off Victoria Day fireworks.” Check out her website for more information.

Toronto ON: Another little chapbook I picked up was Catherine Paquette’s A Theory of Darkness (the unkindness of ravens press, 2010), what appears to be a little sampler from a “larger cross-genre mystery novel” work-in-progress. Why do you, Pacquette, require an introduction at the beginning instead of little essay at the end? As a reader, I’m less interested in the explanation than the work itself, and wish she would have let her readers experience such without preconception. There are some good lines here, in a series of small straight-prose sections, albeit in need of editing: “Time is a formula to hate. Clocks are laughable containers. Like hearts.”


The Funeral Home of Time

A mug shatters. It is like that – the fragmenting. Something breaks into something else. The sun is rising. Breaking out from the darkness and the moon is fading out with the stars. Her breath regains and loses itself unevenly as she steps over the shards. Yes, she has lost. There are deaths all around her. she is grasping for something, but the temporal grope leaves her empty handed. She sits and watches the dark becoming light. The ruins of the night. Invisibly present and invisibly past, weaving in and out of the shifting moment. Now, she is hungry and takes in, chewing. Changes matter into mush and uses it to fuel her now. An empty plate; a broken cup. No, we do not have time to attend all the little funerals.

Ottawa ON: Produced by Ottawa writer Matthew Firth’s Black Bile Press is Toronto writer Nathaniel G. Moore’s “Sensational” Sherri (2009). Just what is it about professional wrestling, between this and his first novel, Bowlbrawl (Montreal QC: Conundrum Press, 2005) that keeps Moore (who once appeared on City TV’s Ed the Sock in a Mexican wrestling mask and subsequent match), and even Michael Holmes, going? “Never mind Mickey Rourke in The Wrestler…” the back cover tells us.


Ricky’s face filling red, voice evaporating. “Hey,” he said. Not sure if his words could be heard, not that if they mattered, just if he was actually speaking or lying down somewhere thinking this was going on and, “So, hey,” shifting the stool closer to the strangers, “But have you, or Carla, do you know?” He was slipping on and off the stool. “Hi … there.” He was using a bad Elvis voice. “Do you, hold on,” [wobbling his ass on the stool]. “So have you, you …” [focusing on one of them, one girl’s bony bare wrist. “S-s-s-sorry; I’m Rick by the way, must be wondering,” [slurrrr slurrrrr]. “Can you sit sit sit, okay, can you sit on on … a white frost cake. I mean, doesn’t goddabe white frost per say, can you sit on a cake for my birthday; it’s in July?”

Heels don’t turn but stay the same way. Heels are bad guys who work with heroes or baby-faces. When a heel becomes good, it’s called a face turn, or turning face.

Toronto ON: I didn’t get this at the fair, but Brian Fawcett handed me a small stack of his THE NORTHERN B.C. RULES with The Regulations for Snipe Hunting (David Mason Books, 2010), a small booklet of lists including “The General Rules,” “Survival in the Bush,” “Surviving in Town” and “The Snipe Hunting Regulations.” You can take the boy out of Prince George… What I enjoy best of all in this unassuming chap is the space at the end, the “several blank pages for additions to these rules. If you would like them to be considered for subsequent editions, please forward them to the publisher or author,” the inside says. Do you think they really would? As the colophon claims:


These rules are designed for physical survival in the Canadian north, which is an area that starts anywhere 100 kilometers north of a major Canadian city and extends to the geographical point at which all-terrain vehicles and skidoos outnumber normal transport, and government officials outnumber human beings (at which point “north” becomes “North” and only idiots are willing to put up with the cold and bugs).”

Fawcett, currently in Toronto but originally from Prince George, British Columbia, has a long history with the north, and about writing creative non-fiction works that could best be described, I suppose, as suggestions on negotiating various aspects of the world, including his work through the ongoing Dooney’s Café. From the first page, here are the first four, for example, general rules:


1.) In the north, rules only work in optimum conditions. Most of the time the rules are frozen solid or fouled with mud like everything else.

3.) The most common natural hazard in the north is other people with beer or hard liquor on their breath. Unless you’re actively looking for trouble, bears are down around 17th in the list of things likely to harm you.

4.) All government and corporate megaprojects not only fail to produce promised benefits, they also produce unexpected side effects that eventually make life worse while exponentially increasing the volume of broken down or abandoned vehicles and other non-rustproofed machinery littering the landscape.

I don't believe it's a matter of factions. Have you been to the Meet the Presses Indie Literary Market? I don't think you have.