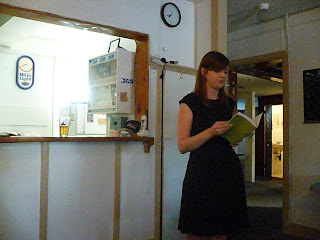 [Marilyn Irwin launching her self-published chapbook at the Carleton Tavern] Another month, another group of little notices. I've two poems in the new summer 2010 issue of MiPOesias, Amanda Earl has something new in OTOLITHS, and John W. MacDonald took a photo of a previous Carleton Tavern reading. What else would you like to know?

Ottawa ON: For the above/ground press reading on Friday, launching (finally) spring chapbooks by Cameron Anstee and Marcus McCann, Ottawa poet Marilyn Irwin launched a lovely little self-published chapbook in an edition of 22 copies, her for when you pick daisies (2010). A chapbook she read in full for her reading, I admire the charming little twists, the elements of the small moment and moment twisted, twirled, that come out, through. For such lovely little poems, why haven’t we seen more of these in other places?

grass sway
all that
flutters by

Hamilton ON: A recent chapbook by Hamilton writer, publisher and composer Gary Barwin is The Punctuation of Thieves (serif of nottingham, 2010), turning his surreal gaze onto punctuation itself. Some of these are quite interesting and inventive, but some pieces read as too easy; why not push as far as you can go, Gary Barwin? Why does it sometimes feel as though Barwin is holding back? And is this part of a longer series we might see somewhere else, down the road?


The ampersand dreams. Mother & child, the primordial &, a mother’s arms around her child, the Moebius umbilical, the inside out, the turning a portrait of itself, the between one thing and another, the ‘and other’ connected, the hand and its other, the breath and its shadow, the shadow’s curl, the ampersand.

Thanks for the discussion of the chapbook, rob.

I was going to push as far as I could, but I hit a full stop!

There's more discussion of my work generally, and the "Punctuation of Thieves," generally, in an interview that I did for OpenBook Toronto with Alessandro Porco: http://www.openbooktoronto.com/aporco/blog/grammatical_scale_interview_with_gary_barwing