In the acknowledgments of his new poetry collection, Toronto poet and publisher Mark Goldstein writes on the purpose and constructions of his Tracelanguage: A Shared Breath (Toronto ON: BookThug, 2010):

This “Shared Breath” of Paul Celan’s seminal work, Atemwende, is a transtranslation because, to quote Mauriece Blanchot, “translating is madness.” One would like to feign accuracy where there is none and yet Lagerbrot can never be Challah, no matter how hungry we are. In exhausting this hope, we need no longer circle the poem seeking rest having accepted its groundlessness. 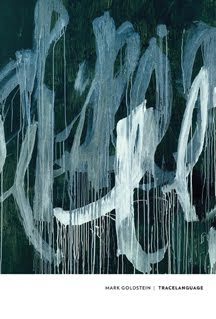 That being said, the idea of “transtranslation,” what Erin Mouré coined as “transelation,” is certainly not new, but the applications on how these shifts are made are certainly becoming more engaged as the form continues to adapt, with some recent examples including George Bowering’s Kerrisdale Elegies (Toronto ON: Coach House Press, 1986; Vancouver BC: Talonbooks, 2008), Mouré’s own Pessoa collection Sheep’s Vigil by a Fervent Person (Toronto ON: Anansi, 2001), as well as her more recent collaboration with Montreal poet and translator Oana Avasilichioaei, Expeditions of a Chimaera (Toronto ON: BookThug, 2009).
To write inside, out and through another work, collaborating a voice between your own and the original remains a challenging task, and one few seem capable of mastering, yet Goldstein’s close and quick attention to the slowness and mutability of Celan show his wide appreciation and knowledge of the late poet’s work.

DEAREST,
regale me with snow, for we worsen –
each soft shoulder greens
a lone oak tree, sheltered by summer
high above that
child’s shriek.

Not that this is Goldstein’s first conversation with a dead poet, the slim volume After Rilke (BookThug, 2008) being a series of letters written to the late San Francisco Renaissance poet Jack Spicer. For this collection, Tracelanguage: A Shared Breath reads as a conversation of another kind, yet still a dialogue between his own writing and that of the late Paul Celan, known for a poetry that does more than survive some of the darkest parts of the Second World War, but manages in such a way that even the darkness brings in light, in a poetry of words broken, smashed and rebuilt, furthering the entire field.
Celan’s Atemwende, originally published in German in 1967 and translated into English by Pierre Joris in 1995 (fragments of such were also translated by Michael Hamburger for his 1972 Poems of Paul Celan), translates to “reversal of breath,” giving Goldstein the opportunity for his “shared breath.” A poem built of fragments not as obvious as Mouré’s “sheep,” Tracelanguage: A Shared Breath is a poem crafted out of deep attention. Goldstein breathes, and Celan’s air reaches deep through every pore, every cell. In the introduction to Poems of Paul Celan, Hamburger wrote that “the anguish, the darkness, the shadow of death are present in all his work, early and late, including the most high-spirited and sensuous.” In Goldstein’s “shared breath,” this darkness feels embraced but with an articulation of something else as well, an optimism across the chasm of years between that text and this, and somehow binding the two.

BLACK,
that evocative wound
where the eye digs after you –
its heart-root, badly bruised
a crown land
where remains our bed:
by the stream, you become –
we become
numb, in a seminal sense, we split the seed and speak
of innermost permanence.
This name-giving has to end: this name-
giving must not end, without you
one knows no providence.