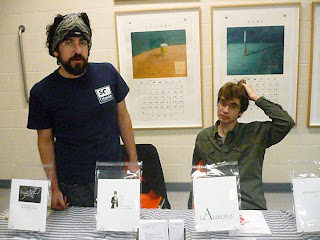 Of course, since I already posted a Toronto version of same, it just seemed fair that I do one for our own local. Otherwise, did you see what Judith Fitzgerald was nice enough to write up in the Globe & Mail books blog about my guest-edited Dusie 10?
Here are some things I picked up at this most recent spring fair.
Ottawa ON: I’ve been intrigued by Amanda Earl’s ongoing “Kiki” project, writing out Man Ray’s infamous subject, Kiki of Montparnasse, in a sequence of poems (there was even a series of photographs of Earl taken by her husband, photographer Charles Earl, that echoed Man Ray’s own). Kiki, otherwise known as Alice Ernestine Prin (1901-1953), helped define Paris culture of the 1920s, but somehow is known predominantly for her visage in photographs by Man Ray, otherwise known as her lover. Amanda Earl’s first large poetic project, part of watching her create such a work is also watching Earl, who has been producing increasingly interesting work the past few years, also learn how to create such a work, with this new fragment Kiki (LaurelReedBooks, 2010). Earl has been slowly working her way up into longer projects, including her The Sad Phoenician’s Other Woman (2008) which riffed (obviously) off of Robert Kroetsch’s Sad Phoenician (1982), later included in his Completed Field Notes (1989; 2002). An intriguing selection of prose, I wonder how, in the end, this might compare to another Canadian poet who wrote on another famous subject from roughly the same period, Susan Elmslie’s I, Nadja and Other Poems (2006)?

This is Alice. This is fucked up. This is opium. This is the drug I share with Cocteau, his gold brocade jacket in Achille S’s back room, blinding. We paint; we compose in opera and I am Kiki. I wear pearls. I drink red wine and sing love songs to old reprobates in the boîtes. Kiki in a box.
Man Ray oh Man Ray of light. Yankie mama’s boy with pidgin French like a toddler learning his A B Cs. Satie, Foujita, like them. I think, of the possibilities for good meals. A good strong vin de table. man gives me a hat to make me his lady and later his bedroom gutter slut. I sing when he plays me. He inks cello markings into my bad, brands me, but the ink runs, stains his lily white tapis. His hands. I can feel them now, stroking. I am untameable. My chum, my petite amie, Mady, the panther. We slink along in the night and roar on rooftops. Hemingway should set us up in Africa, abandon the little woman and Bumby.

Ottawa ON: The small moments like tributaries that make up Toronto poet Leigh Nash’s Landforms (Apt.9 Press, 2010) each pull her poems up to the point just before the end, leaving the small moment open, and slightly stretched. Like a point on a map, where the small moments end and begin in Nash’s poems become nearly irrelevant, and impossible to know; they simply exist. And what is this in the back, that she has a first trade collection forthcoming with Mansfield?

Ottawa ON: I’ve been excited by Pearl Pirie’s ongoing experiments (along with Marcus McCann and Roland Prevost) with meaning and sound, the most recent example of which is her lovely poetry chapbook over my dead corpus (AngelHousePress, 2010). A collection of experiments boiled down to see where they might end up, she writes in the chapbook’s back:

The main source corpus is over 500 pages of scrap notes that served as fodder for recombinance. Words or phrases were scraped for letter sequences within syllable or that broke across syllable or word. The other corpus is incidental word combinations from scrabble strung in the mind’s insistence for meaning or sound.

But as much as I marvel at her poetry, I am frustrated by her prose, caught somewhere between what she thinks prose should sound like and struggling to discover her own voice, her own form, caught in the ambles amid confidences. she has been coming into a soundscape of difficult meaning for her poetry over such an extended period, I can only hope and wait, knowing she will eventually arrive in her own time, in a prose currently made of magnificent lines surrounded by uncertainty and her usual chaos, which, at its best, holds itself between meaning and unmeaning. It’s already there in her poetry; where else can she possibly go? I look forward to finding out.

corpus up sleeve: 26
take measures for
what exacerbates anklets and necklace of
red embrace, walk away, more
ungraceful preface, gag faces, double-spaced
lace of discomfort, the race to china, wild geese
and above a psalm above a spasm and a pond skewed by
drops, the water level from mashup crops of
tightly surfaced shoelace trace
atkins, my glasses placed in the alphabet
my absence hasn’t paced on at the same rate.
in my face is someplace I’ll never be
and in a race of no fixed gender
uncountable this and that
space, face and what lodges in you

Toronto ON: Just so you don’t get the wrong idea, there were worthy out-of-town publications there too, including The Coming Envelope: issue 1 summer 2010 (BookThug, 2010), edited/curated by Malcolm Sutton, with fiction by Jacob Wren (previously known as Death Waits), Sheila Heti, Lily Hoang / Debra Di Blasi, John Goldbach and Lee Henderson. I can only hope that, once one gets into another of these new publications of occasional journals, it might have a further life beyond the first issue or two, unlike the seemingly-disappeared Syd & Shirley and BafterC. There are the most wonderful little fictions happening in this journal, and it would be a shame to see something as rare as a publication of witty, wise and engaging fiction fall by the wayside. There are far too many examples of dull, ordinary prose.

And it’s an ongoing joy to see anything from Toronto writer Sheila Heti, a writer I revel in seeing more often lately in the most unlikely of places (and some have been extremely unlikely, including an art monthly to the National Post). It took me a while to really get into her writing, but now I’m a devoted fan; is a third book, finally, forthcoming?
Posted by rob mclennan at 3:51 PM
Labels: Amanda Earl, Leigh Nash, ongoing notes, ottawa small press book fair, Pearl Pirie, Sheila Heti