Jandak photography: how this photo came to be 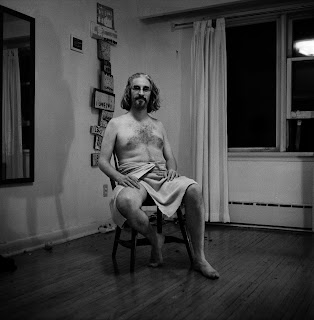 It was a late night Saturday, June 19, hours after post-Toronto Small Press Fair dinner and drinks with the organizers and some others, post-post drinks with Carmel Purkis. I had returned, exhausted, to the post-move High Park apartment of Sharon Harris and Stephen Cain, half into a two-week “residency” that Sharon offered. When I arrived, she told of the photographer upstairs, interested in, as she said, the “poet staying in our apartment.” Would I allow him to take my portrait?

I’d had a photo-shoot or two before, including one in summer 2008 with Ottawa photographer Charles Earl, a session in their Bronson Avenue apartment eventually focusing on what I happened to be wearing, including black jean cut-offs and wool socks, becoming his accidental series, “poets in wool socks.” And so it was, hot enough and exhausted on Quebec Avenue, stripped down to briefs to quickly check email and collapse, as a knock on the door after midnight. I wrapped the closest towel around and answered.
Does that sound creepy? Using the empty room once master bedroom, he used a 1950s box camera and tripod, pulling in one of the kitchen chairs into the empty room, with little but the dusty hardwood, some of Harris’ artwork not yet moved. The next morning, relating the story to Lainna, she shook her head. I think you were tricked, love.
Later on, realizing through his website, Patrik Jandak was Slovakian, and had spent nearly four years for the President of Slovakia, with photography shows in London, Canada and the Vatican. Later on, seeing his cache of female nudes in narrative poses, and realizing how closely aligned my shoot actually was. Brave, she claimed.
I’m intrigued by photographers for the fact of becoming both subject and witness concurrently, silently watching his eyes dart the space, moving and checking light, background, the chair to the left, just a bit. Lift your head. In 2001, my daughter did the same for the images that made up the cover of side/lines: a new Canadian poetics (2002). Before digital became her preferred medium, I watched her an afternoon take up to ten or fifteen minutes to set up individual Polaroid shots along Somerset Street West, preferring to see what she’d done before going further. Her process, even at the bare age of ten, was extremely compelling. And somehow, the staccato of a dozen shutter clicks to capture the accident of a single image is somehow less interesting to me; a whole other process, with alternate goals. After twenty minutes of shooting, in the end, Patrik took seven, nine shots?
see his own write-up on same here;
Posted by rob mclennan at 8:08 AM
Labels: Jandak, rob mclennan, Toronto

SO is this the beginning of the "poets in towels series"? I'm in!

Diane would be my great pleasure :) as I mentioned on my blog this is ongoing new photo series of Canadian poets :)