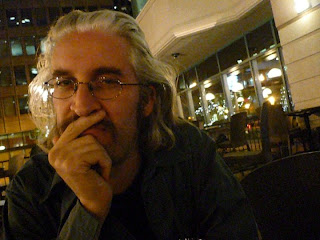 May 26, 2010; This is an interview done with me a few days ago by David Kosub on editing poetry anthologies, used as part of a piece he posted yesterday at his Speaking at Poems, using (I would presume as well) interviews with Marilyn Bowering and Todd Swift.

1/ In Side/lines: A New Canadian Poetics you say "If there are theories of a national literature, they exist on a par with theories of Canadian nationalism, where any point of view is said to be given equal weight." Michael Barnholden, managing editor of West Coast Line and Publisher of LINEbooks says you're arguing for blissfully "agenda-free" writing here. Is that the case?

rob: Well, possibly less a matter of "free" than "reduced," I suppose. One gets tired of the politicing that goes on between writers, of poets who won't even acknowledge other poets at readings because they embrace what they consider to be conflicting poetics. There's something really unfortunate about that kind of attitude. There are things I've learned from reading derek beaulieu and George Bowering, and other things I've learned from David Donnell and David McGimpsey, Susan Briante, John Thompson and Stephen Brockwell. Picasso revitalized visual art by bringing in other elements from, among other sites, African art; why would I want to reduce my options for influence before I'm even out the gate?

I understand the importance of groupings; sometimes it's the only way to help one's own sense of writing develop, form and advance, but to argue one agenda over the other... What's the difference between that and arguing that one's own religion is the best, and the rest are irrelevant? It's arrogant. There are many things to learn from many camps; saying that, I obviously have my personal preferences.

2/ Barnholden also said of Side/lines that it pointed "to poetry and poetics as nothing more than a "sideline," something to "occupy your leisure time when you are not performing wage slavery in the global emporium down on the corner." Fair comment? Over the top? What was your main intent?

rob: That sounded like Barnholden simply trying to find something to argue with. My main intent in that anthology was exploring different voices of Canadian writing that never make it into the mainstream, so my intent was "outside of the immediate mainstream of Canadian poetry." There's such a rich wealth of different kinds of writing in Canada, and it seems enormously frustrating that most journals and media seem to focus their attention on the metaphor-driven narrative lyric. I wanted a national conversation to exist as well on these other voices that deserved attention, voices from different corners that (I was told later on) weren't really aware of each other, including Rob Budde, Stan Rogal, Anne Stone, Margaret Christakos and Jason Le Heup.

3/ What are anthologies good for anyway? as an academic tool? a tool for broadening poetry's audience? Or do they merely serve a pragmatic purpose to get out new or previously unpublished work?

rob: Honestly, it depends on the boundaries of the anthology. I think an anthology can serve many functions at the same time. Most of what I've worked as an editor of anthologies has been to add to, to enrich the conversation of literature as opposed to replace anything. I adhere to Kroetsch's idea that literature is a conversation. But if the same voices are constantly talking, how far can the conversation go? Side/lines was a direct result of my seeing a new edition of Margaret Atwood's Survival published in 1996 or so, without even an update of "books by the same author." This was a book considered skewered when it originally appeared, and I could only presume that it was reissued (still littering Canadian used bookstores across the country) for the sake of the foreign market. I wanted another point of view out there as to what Canadian writing could be, and what the conversations and considerations of some other voices were.

4/ How do you feel about themed anthologies or ones that focus on gender, culture, or particular region of a country. Do these impede the capturing of good poetry?

rob: I have no problem with any of these, as long as none of them are specifically seen as the be-all,
end-all. I sometimes have trouble with too many women-centred anthologies, only because the same generation's male writers don't seem to be given the same attention. There was a magnificent anthology recently of women's poetry and poetics with Coach House Books that is essential reading, but part of me wondered, why can't Stan Rogal be treated this well? Or Stephen Cain? No matter what one tries to do as catch-up, it leaves someone out. I suppose that's inevitable.

And I must say, I've always been a fan of regional anthologies. Chicago had an amazing poetry anthology a couple of years back, and the Saskatchewan one published by Hagios Press was another high point. It's always good to see what other areas are doing.

5/ A key question that came up in the comments section of last week's post had to do with how much we can or should expect of anthology editors in terms of "knowing the field." How far should an editor go in trying to represent the array of tastes that are out there? Are the sheer numbers of poets writing today a major challenge?

rob: Again, it depends on the purposes of the anthology. I took issue with the two Breathing Fire anthologies done by Patrick Lane and Lorna Crozier in my essay "The Trouble With Normal" mainly through their introduction that claimed a collection of poetry predominantly by former writing students of theirs writing metaphor-driven lyric narrative was "representative" of the "best Canadian poetry" written by poets in this country under the age of thirty. It wasn't, and to claim such is divisive, and offensive to those who happen to have interests that don't coincide with theirs. Had they not said such, the writing within might have been read with less rancor, but again, might not have received as much attention. When I've done the "decalogue" anthologies, I've tried to balance ten voices of writers I think are doing interesting work, not claiming "best" or anything like that. I think it's the best based on my interest, my knowledge, etcetera, but the whole nature of doing any anthology is leaving someone out, and I can't claim that my point of view is the only one there is. Here are ten writers doing work really worth reading. Readers are allowed to disagree.

Al Moritz doing his Best Canadian Poetry volume was also riddled with problems. It should have been called "Best Canadian metaphor-driven lyric narrative Poetry." To say otherwise is completely misunderstanding the art as a whole.

When Sina Queyras did her anthology of Canadian poetry for that New York publisher, it was, from a Canadian's point of view, all over the place, but was built as a sampler, in many ways, of Canadian poetry for an American audience, after years of her being asked the question, what's worth reading in Canadian poetry? Hers had no agenda apart from simply different writers, different voices, she thought worth reading; and hopefully, the book was a starting point for many readers to further explore.

6/ A related question pertain to a common complaint I hear about anthologies, that they purport to speak for the whole - or as one of my readers put it a tag-team of lyric, narrative and formal poets offering up a very narrow serving of poetry which ignores the long poem, ignores the avant garde, while simultaneously construed by editors as indicative of a national poetry. Fair comment?

rob: I think a reader should be careful not too read too deeply into intent that might not actually be there. Introductions are important to see what the editor's intent for the collection is. Some books make claims that seem ridiculous, and bring all the work inside down (such as Starnino's claims in The New Canon; why does he insist that his point of view is the only worthy one?), and others don't. With every introduction, a grain of salt. Hell, just read the work.

7/ How important is it to provide a statement on poetics at the front end of an anthology? Gary Geddes says it helps teachers and students understand more of the poetic process and the kind of aesthetic issues that poets find important. Do you agree? Do some editors over-reach in assessing the impact of their anthology?

rob: Well, Geddes has been decades deliberately building mass market poetry anthologies for university courses, so his comments are fair, but not all books are made for those purposes. Does the reader or writer inside the industry, inside books, for decades, really go through those "teaching aides" with the same fine-tooth? Perhaps not.

8/ Anthologies are viewed by many poets as the ultimate validation of their careers, and some poets, even well established mid-career poets, agonize when they're ignored by anthologists. How seriously should they take this?

rob: Well, writing is a lonely business, with few acknowledgments, but writers need to find their own footings, their own confidence, and not rely on outside forces to arbitrarily give purpose to what it is that they do. It's enough to drive one mad, otherwise, waiting. Books are books. Some very important writers have never set foot in an anthology, and some forever-minor poets can run off lists of books they've been in until the cows come home. Poets agonize, writers agonize. Everybody complains, and no one likes to be left out. I've been left out of a wide array of poetry anthologies, from the two Breathing Fires to the myriad of Breathing Fire follow-ups and responses. I try to only complain to a small parcel of friends about that, now. I know Henry Beissel is still annoyed he was left out of a Penguin anthology of Canadian poetry by, I think Louis Dudek, back in 1958?

9/ What are you working on currently?

rob: I'm currently trying to get a number of projects prepared for Chaudiere Books, including a selected poems by prairie poet Andrew Suknaski, a first trade collection by Ottawa poet Pearl Pirie, and an anthology of non-fiction pieces by writers on Glengarry County. In my own work, I'm polishing up a poetry collection or two, and trying to finish two major writing project by the end of this year—a third novel, and my Toronto creative non-fiction work, "Sleeping in Toronto."

10/ Finally, rob, my questions obviously aren't exhaustive, but I always ask the people I've interviewed if there's anything I've missed? Any issue you feel needs airing or perspective that is wanting?