Both sides of the border: Rogue Stimulus and Starting Today

“Poets,” Shelley declared, “are the unacknowledged legislators of the world.” How can this be? In his Defense of Poetry (written in response to Thomas Peacock’s assertion that poetry bears little relevance in an age of science and technology – sound familiar?), Shelley asserted that poetry “awakens and enlarges the mind itself by rendering it the receptacle of a thousand unapprehended combinations of thought,” because it is “a sword of lightning, ever unsheathed, which consumes the scabbard that would contain it.” No wonder one of the first objectives in a military coup is to gain control of the media. No wonder writers – and poets, especially poets – are jailed by dictators all over the world. No wonder the surge of unprecedented hope in this country, sprung from the unwelcoming gray scarp of nearly a decade of palaver, makes us feel tentative, yet exuberantly alive.
Rita Dove, “Foreword,” Starting Today 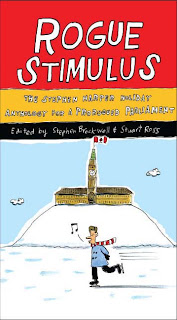 Poets in Canada and the United States have been responding to politics happening in their respective countries over the past number of months, resulting in two very different poetry anthologies: Rogue Stimulus: The Stephen Harper Holiday Anthology for a Prorogued Parliament, edited by Stuart Ross and Stephen Brockwell (Toronto ON: The Mansfield Press, 2010) and Starting Today: 100 Poems for Obama’s First 100 Days, edited by Rachel Zucker and Arielle Greenberg (Iowa City IA: University of Iowa Press, 2010). There has been a concern over the past decade or two that ordinary citizens in both Canada and the United States have lost their engagement with politics. Madonna once pleaded with her fellow citizens to “rock the vote” given the state of their poor voter turnout, working an appeal (as well) to the not-fully-engaged, potential first-time voter. The recent Iraq election, fraught with turmoil, bombings, fraud and other violence, had a higher rate of their population voting than we had in Canada during our last federal election. Where does this apathy come from? Even when Prime Minister Stephen Harper tried to turn artists against “ordinary Canadians” (suggesting, therefore, that one had nothing to do with the other) and slash cultural funds, it was really only the francophone artists in Quebec that managed to organize themselves, rally together, and talk directly to the media to explain the importance and richness of culture on a society. Or, the same who forced an election to deliberately pre-date the last American Presidential race, in case a Republican loss south of the border might trigger a Liberal win here.

The blurb on the back of Rogue Stimulus: The Stephen Harper Holiday Anthology for a Prorogued Parliament says it best, providing the driving force behind this instant anthology, giving five days between first call and final deadline:


When Prime Minister Stephen Harper prorogued Parliament (for the second time in a year!) on December 30, 2009, he punted many vital bills into oblivion. But he also inspired hundreds of poems after Mansfield Press announced this government-toppling anthology. This book gathers a range of responders—from outrage to slapstick—by acclaimed poets (including Canada’s first Parliamentary Poet Laureate and several winners of the Governor General’s Award for Poetry), previously unpublished poets and, to paraphrase Stephen Harper, ordinary working Canadians.

The “people’s poetry” aspect of the collection is interesting, but makes for somewhat of an uneven collection, yet the deliberately seventy-two poem collection seems almost reminiscent of Vancouver poet George Bowering’s own “people’s poetry” collection, his Seventy-One Poems for People (Red Deer, AB: Red Deer College Press, 1985), which riffed off Dorothy Livesay’s own Poems for People (1947), building a book that, hopefully, might engage more than those just interested in poetry. Why is this such an uphill battle, inviting engagement with politics or poetry?

One writer who seems to engage with the nuances of politics on Parliament Hill with regularly is George Elliott Clarke, himself a Governor General’s Award winner for his poetry collection, Execution Songs (2001). His aesthetic often switches gaze from the Nova Scotia communities of his roots to the workings of federal politics (he was employed on the Hill for a period in the 1990s, working for a Nova Scotia Member of Parliament), including numerous works on the late Prime Minister Pierre Elliott Trudeau.


Stephen Harper as Himself

A pasty-faced, milquetoast, humpy doughboy,
As icky as egg white and just as dull,
This professor of snow jobs oozes, slides,
From incline to decline to hole, shedding
Blizzards of dried shit and confetti’d lies,
Or slithers in grey areas, shady,
Like a right abominable snowman
Who’s leery of sunlight. His Canada
Is cold as a morgue: a deep-freeze Parliament,
With policies the Ice Age fossilized.
Our Howdy Doody in a flak jacket,
Pres. Harper strives to ape Richard Nixon,
To play his dreary replica, to slouch
Unpardoned, unloved, into infamy.

There is an entire group of west coast writers writing out of social politics through language who would have been fascinating to see responding to the prorogue, but somehow, are noticeably absent. One can only presume that they chose not to responds to the quick-call, dealing, perhaps, with the social and cultural implications (and disruptions) of their Olympics, including Peter Culley, Stephen Collis, Wayde Compton and Marie Annharte Baker (a recent issue of Vancouver’s The Capilano Review [see my review of such here] reflected some of their responses). In a country made out of regions, are the concerns of a government engaged in two annual prorogues, poorly-conceived debates on Arctic sovereignty, deflecting questions on Afghan detainees, and silent on those missles off the coast of Newfoundland simply an issue of so-called “central” Canada? Part of what the book works as its main thrust, its main point, seems to have been to publish a wide range of responses, from the “literary elite” (another thorn, supposedly, in our Prime Minister’s side) to poems by “ordinary working Canadians.” Because of this, the anthology presents seventy-two poems that range from earnest to lyric to jokey, threading an unsettling frustration to simmering anger at shutting down Parliament for what has been seen by many as an action against democracy, such as Jason Heroux’s “Old Year’s Day,” that begins: “There was no New Year / this time around because / parliament shut down /so we had to begin / the old year again.” Another is the magnificent “The Chair” by Toronto writer Daniel Scott Tysdal, that includes:


Plato would lose it: a chair—already so far removed
in ink from its ideal form—degraded by the addition
of the features of a ruler satirized for ruling. “Look
at the poets,” he’d state, “validating your right
to prorogue. For them? What’s the good? They find
your face in a chair without realizing they can’t even
see you. You’re a true leader, Harper, your true
features at all cost remain hidden.”

The anthology Starting Today: 100 Poems for Obama’s First 100 Days, edited by poets Rachel Zucker and Arielle Greenberg, was originally conceived of as a daily blog (one that is still up, with fresh entries, at 100dayspoems.blogspot.com), asking one hundred poets to write a poem for the first hundred days, usually composed within hours or a day of appearing online. As editors Zucker and Greenberg write in their introduction:


In those jittery, preinaugural hours, it became clear to us that our exhilaration stemmed, in part, from the knowledge that we were not alone in our enthusiasm. We knew others felt called to action just as we did. That same afternoon we compiled an e-mail list of poets – friends, acquaintances, and folk we admire – from across the country and across generations. Could we get ninety-nine poets to commit to writing a new poem during the first one hundred carefully watched days of the new presidency? And could we get them to respond overnight, so that our project would coincide with Barack Obama beginning his job? Yes, we could! Poets wrote back immediately, and with gusto.

Organized in the order in which they appeared online, from day one to day one hundred (starting with the only pre-written poem in the collection, Elizabeth Alexander’s “Praise Song for the Day,” which she read at Obama’s inauguration), these pieces exude all the hope and fears and uncertainty that came about in those first heady weeks and days. There are the uncertain poems, the poems clear in their vision of change, and those who were only able, still, to hope, marking an interesting record, in itself, of that beginning period of a new president.


In the little painting of love
Is a man repairing a fence.
Catherine Wagner, “Oh” (Day 52)

What makes the anthology, in part, much like the previous, is the range of writing styles that exist in the collection, and the fact that it is one of the strongest anthologies of new writing I’ve seen in some time. There is something about the vibrancy of the poems in this collection; and is it just me, or do these pieces of the immediate, of the occasion, move from celebratory to quietly tentative to more certain, optimistic (and, often, more realistic) and more giving as the days continue?


Imagine being unable to imagine
another side.

What would you be?

A hill so steep you’d throw your thoughts against it?
Fanny Howe, “Imagine All the People” (Day 5)

One of my favourite (or, should I say, “favorite”) pieces in the collection has to be Brenda Hillman’s “Guilt Armada (draft of a haibun),” produced for Day 98, which is quite lovely, and begins:


About a hundred days into the dream, I saw a ship. I feel free to hide it here. A poet can hide anything in her poem. Some think this exceptional freedom is why we are at war. How can presidents sleep? Do they take pills? I feel free to ask. They give orders to kill people they don’t know. This president is an intelligent man, he’s like a son. The top of my left hip—where the femur meets the pelvis—feels turquoise. Arthritis or something. The president has compromised his ideals. How does he sleep after sending soldiers for endless violent occupations since Ghandi is on his list of top ten. Give him time, say my friends. Even now he looks tired. He does not say “endless violent occupations” but I am free to say it. I can choose Grande or Tall, Blackwater, oil & opium. The handsome general sits in the Appropriations Hearing. Nice haircut. His medals look like the little colored bands they put on pigeons. He has talked two presidents into endless violent occupations. Do presidents get stoned on power or what. Give him time, say my friends. Even the people crouching in the Shadow Banks & changing their shadows in shadowy corners say Give him time. Tossing their used-up shadows in the sea.