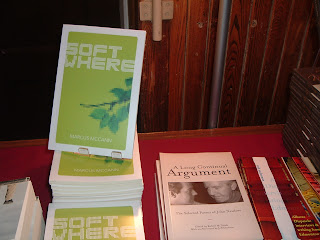 Ah, festival. Is there anything we love more? Staged in its new location at Saint Brigid’s Centre for the Arts and Humanities in the Byward Market, the first poetry cabaret of the spring festival involved Ottawa poet and journalist Marcus McCann, Antigonish, Nova Scotia writer and editor Jeanette Lynes and Toronto poet and editor Molly Peacock, with a literary crowd out for same that included Ben Ladouceur, Nicholas Lea, Michael Blouin, Amanda Earl, Pearl Pirie, Sandra Ridley, Warren D. Fulton, Rhonda Douglas, Gwendolyn Guth and Steven Zytveld, among others. Our own Marcus McCann, editor of Capital Xtra, was launching his first trade poetry collection, Soft Where (Chaudiere Books, 2009). I’ve always been a fan of the acoustic gymnastics in McCann’s work, and not only because I’m the publisher of the collection. In his introduction, Stephen Brockwell compared McCann’s work to that of Hart Crane, which I thought interesting, a poet I don’t know the work of at all, as well as calling McCann one of the most promising young writers currently in the City of Ottawa.

that badunkadunk tongue was a thrum-sucker.
Once we snuck under the junked Cutlass, chunky

Todd undressed some buttons, thumbed my undies’
broad band. What was the rush,

I thought we were going four wheeling?
Got gummy, the dust stuck to our clothes’

shunts and udders, his palm buzzed where
I couldn’t look. Everything torqued, we were

both the busted guzzler’s undercab and squinting.
We stunk like what we’d done, I guess. I felt

like we’d shot a skunk, got sprayed – that dumb – until
cunning we skulked out to the tracks and began again.

Jeanette Lynes had not one but two new books last night, a new novel that wasn’t mentioned, and a new poetry collection that was, published by Wolsak & Wynn, neither of which I managed to sneak peeks at. With a poetry collection out last year with Freehand Books on Dusty Springfield, and her new collection, ostensibly, as Lynes claimed, part of her “blue period,” it seems as though she’s on a roll. And underplayed, as Brockwell later claimed; keeping her subtlety close and overt movements closer. When might I see these books? Is Lynes, editor of The Antigonish Review, around for another few days? It was interesting, during the event previous to theirs, hosted by the Dusty Owl Reading Series, a ferocious wind and rainstorm tore open the back door of the cabaret, sweeping a force of wind, rain and dust through the kitchen, cabaret and up the stairs into the main body of the old Irish church. Dusty Owl, Dusty Springfield; what else could we have expected?

Molly Peacock, Toronto poet and editor, responsible for getting the new series Best Canadian Poetry in English off the ground, read from her new poetry collection, the second blush (McClelland & Stewart, 2009), a collection she described as a series of “mistakes,” before going on to compliment particular lines by the previous two authors (including McCann’s “that badunkadunk tongue”). There was something odd about the theatricality she utilized while reading her poems, something that the host later claimed brought an element into the writing, subverting and not undercutting the subtlety of the poems in her collection (she talked about previously doing a “one woman show,” and the theatricality of her reading suddenly made a bit more sense). Writing a more metaphor-driven narrative verse, I wasn’t entirely sure how to enter her poems; I still haven’t figured it out, but there were some pieces there and here that I quite liked. Is it worth getting to know further of her collections, apart from this only one?

We make love better unobserved—not that
we’d ever throw the new cats off the bed.
We let them sit there, turning their backs,
but listening anyway. We don’t move in bed
quite with the freedom we might without them,
but the fact that they stay is like being
visited by minor gods. And we love the minor.
It inspires us because we like being
close to its genius—something we might come
to understand beyond our human bounds
but near to our kind—not like the major,
a capitalized God, for instance, or
uppercase Art. Those are beyond us,
yet our transformation here in bed is art,
something best made unobserved, even by the cats,
who leap off as we forget them and ourselves.
Posted by rob mclennan at 1:17 PM
Labels: Best Canadian Poetry, Chaudiere Books, Jeanette Lynes, Marcus McCann, Molly Peacock, Stephen Brockwell, The Ottawa International Writers Festival