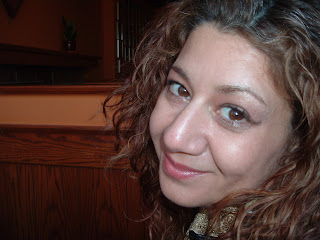 [Lainna] I’ve been here since Thursday, April 9; what have I been up to? My Talonbooks launch next week, so hopefully a good crowd for that, lovingly hosted by Trisia Eddy and Lainna Lane El Jabi and their current incarnation of The Factory (West) Reading Series. A reading there before heading back to Ottawa for the writers festival, but unfortunately missing out on the entire Edmonton Poetry Festival happening here the same time. The same day I flew in there was a day-long conference at the University of Alberta, predominantly made up of English and Film Studies department grad students, apparently to give them practice at presenting at conferences, including readings of creative works by Heather Simeny McLeod, Rebecca Frederickson and Joel Katelnikoff that I would have enjoyed witnessing, but unfortunatly the timing didn’t quite work out. I heard most of a paper on the McClelland & Stewart New Canadian Library paperback series that I would have liked to have heard more of. Being a mini-conference, though, I doubt there will be a post-event publication to go along with it, which is a bit disappointing.

Much of my days have been distracted, in a particular direction. Other parts included a visit to NeWest Press last week to see Lou Morin, a visit to the University of Alberta Press to hand in my signed contract (I’ve a poetry collection out with them soon, wild horses, written while I was writer-in-residence in 2007-8), and Trisia Eddy and Michael Gravel’s combined Olive reading on Tuesday. I heard both of them read last May as part of Eddy’s Red Nettle Press launch, two days before I moved back to Ottawa, and was very impressed by both of them (I have actually heard Eddy read a couple of times now). She has a manuscript ready, but so far, I don’t think she’s sent it anywhere. Gravel, on the other hand, is part of the Raving Poets, doing a more personal and narrative kind of writing that doesn’t necessarily fall into my interest, but he’s one of the better readers I’ve heard in some time. A number of the poems he read from his 2008 Red Nettle Press chapbook came out of the fact that in December 2007, he nearly died of a blood clot in his heart and spent weeks in hospital, so his work certainly is memorable.

Comes across the beat
like chest wire
face drained to paper
neck bulging a pump.
Fingers to wrist,
do the math.
160 at rest.
A dead short somewhere
on the grid.
The heart –
that old electro-mech
stopwatch sump,
swishing the juice,
jamming the pipes.
It could explode,
blow muscle to the lungs.
At 160 I find a chair
send my eyes back
and wait for the sirens. (Michael Gravel, “Further No Theories”) 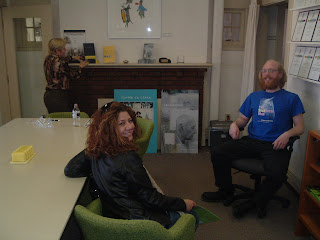 [Lainna (centre) and I visiting U of A Press; marketing guru Cathie Crooks on left, Jeff Carpenter on right] It would have been nice to hear Lainna read in the open set, but she had read in the previous two, so didn’t. I still haven’t heard her read. There’s a video of her reading a poem or two on YouTube (although I can't, for the life of me, find it right now), one of which will be appearing in the next issue of The Peter F. Yacht Club, once all the contributors actually get around to contributing. Saw poet Marita Dachsel as well, partner of current playwrite-in-residence Kevin Kerr (a two-year term recently extended to three) whom I’ve only met once before, and that when she extremely pregnant in fall 2007 with their second child, when she helped us launch the first Edmonton issue of The Peter F. Yacht Club. Have you seen the fantastic interview series she's been doing on her blog lately? Meeting her twice, despite having published her poetry chapbook back in 1996 through above/ground press. Just how big is this country that I see someone only twice, having known them that long? 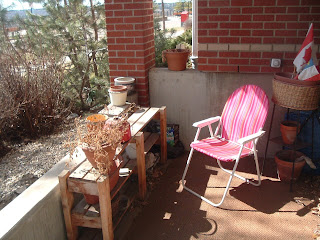 [Myrna Kostash's little front balcony] An already Edmonton week and a bit, wandering the town, quietly through the University of Alberta, along Whyte Avenue (where I picked up a birthday card for my sister’s 33rd birthday), to that West Edmonton Mall we love so much; returned today to Myrna Kostash’s lovely condo [see what I wrote when here last]. Strange to be here again, after nearly six months; good that, after a shared house some distance, I have some singular space to breathe in a downtown condo near shopping, coffee, otherwise. It was early November when I left here last, two Edmonton weeks, to see her after five long months. Another five long months of distance, and so much has changed since then, is different since. So many workable and positive things. Friday night, Lainna and I with Myrna and a bottle of wine, the night before she drove off in her red car to Banff, bags and laptop in tow. Did you know that Myrna has work coming out over the next year or so with both NeWest Press and the University of Alberta Press?

Today, who knows; a quiet laptop day with the spring door open, breeze coming through. The night before, a bottle of wine with Vancouver-returned Catherine Owen and her over-excited dog, jumping around as though she’d never seen human beings before; did you know that Owen has a collection of literary essays out with Wolsak & Wynn in another two years?

Did you know, according to Myrna, Prince George BC writer Sarah De Leeuw won the CBC Literary Award this past year, moons after her first and only book [see my piece on such here] came out with NeWest Press [see my note on such here]. Much of what I’m otherwise up to, preparing a new slate of “12 or 20 questions” to start posting June first (already interviews with Jason Dewinetz, Stephen Henighan, Michelle Berry, Janice Williamson, Ray Hsu, and plenty of others) to correspond with the time I (roughly) begin a Toronto year, following my attractive young lady to the big city. I’m working a whole new list of authors, not wanting any overlap with the previous series. Tomorrow, interviewed by Stephanie Hall for Other Voices, an Edmonton-based literary journal, on these new books I seem to have out. 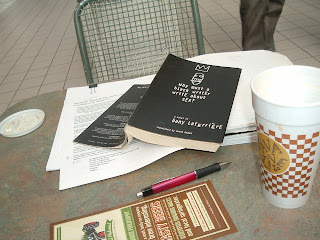 [waiting for her with books, writing, at HUB, University of Alberta] Otherwise, working (slowly) final final edits to this poetry collection for NeWest Press, twice-edited by poet, pal and clever lad (and current Toronto resident) Andy Weaver,who used to make this E-town sing. Scribbling poems, reading Bruce Serafin’s Stardust, Joe LeSueur’s Digressions on Some Poems by Frank O’Hara, Kim Echlin’s The Disappeared, all after rereading Elizabeth Smart’s The Assumption of the Rogues & Rascals, Dany Laferriere’s Why must a black writer write about sex?

Writing an essay about being here, being in these moments of post-Edmonton Edmonton and the beginnings of something else, the beginnings of will hopefully be a creative non-fiction book on Toronto, a follow-up (of sorts) to the “McLennan, Alberta” book I worked while in this town (currently making the rounds with readers, friends, editors and publishers before revisiting such sometime this summer). Edmonton before Ottawa; Ottawa before Toronto. The current plans that hold, and certainly hold.
Posted by rob mclennan at 6:56 PM
Labels: Andy Weaver, Dany Laferriere, Edmonton, Elizabeth Smart, Kim Echlin, Lainna, Marita Dachsel, McLennan Alberta, Michael Gravel, The Peter F. Yacht Club, Trisia Eddy