then angles and points become a whole.

This scene is set
on the road in front,

so as the driveway comes into view, move

to the left of the frame
to foreground her face.
No,

just the eyes and above. (“Notes toward a Short Film”)

Is Chicago poet Carrie Olivia Adams’ first trade poetry collection, Intervening Absence (Boise ID: Ahsahta Press, 2009) a book of absences, as she suggests, or is it something other? As she directly writes, as in her author’s statement, writing:

I have a visual handicap. There are those who rotate objects in their mind. I cannot picture my kitchen table. Or any table. If I tried I might see the curve of the leg. I might see the grain of the wood. Or even just a knot in its grain. But I could not hold the picture still. My mind flickers so. From this, comes a hand-on precision. There were years when I dreamed only in words.

In this book made out of eleven poem-sequences, eleven sequence fragments, this book of poems that click together into a single poem, Adams moves in graceful, slow conversational breaths, and descriptive stretches, flickering on and off.

Iterations. The distant rustle of wings. The ground below.

I believe he is stuffing his pockets with bones.

When I return, nothing
will have been erected or fallen.
But, I will hear the whispers
as he moves through the corridors.

I am peeling skin. For now,
suspension. The shutter caught
mid stutter.

Within, the interior of wood.
Without, water. (“Pockets”) 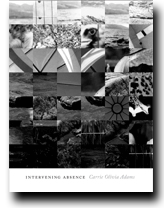 With each line, the poem opens, the poems open, furthering the field on which she writes; how do these openings become so far-reaching yet so compact? This is a poem not in a hurry. Adams might not be able to think in three dimensions but her poems certainly can, writing physical yet abstract, a photograph that shimmers at each edge and shifts, even as you stare directly in. What I admire about this poem is just how far she reaches in so brief a space, how big she keeps to small, with large gestures created with such simple touch.

There is no
There is (“Vermilion”)
Posted by rob mclennan at 10:25 AM
Labels: Ahsahta Press, Carrie Olivia Adams