Going through Myrna Kostash’s stack of books on her writing desk, I started reading the most recent issue of Vancouver’s Event magazine, subtitled “Creative Non-Fiction Contest Issue.” It’s been a few years since I’ve picked up an issue, and I’m glad I finally did, with a number of memorable pieces inside (there are some George Bowering poems inside I was rather fond of, but formatting prevents me from replicating such). Otherwise, I’m always amazed at what Montreal writer David McGimpsey [see my review of his last poetry collection here] accomplishes with his poems, mixing the sonnet with pop culture, and “low” culture at that, equally amazed that he doesn’t get more credit for such.

Britney Beaver Shots Lead Us to Victory in Iraq!

Destroyed is the dance floor with Britney,
destroyed are the girls in her limo,
and in their shoulder-walks past lux
paparazzi—b-chh, b-chh—
like the summer of Oahu sunlight
as Queen Liliuokalani languished in jail
aloha e. I have drunk Brit’s cigarette blend,
have injected all stickety pois
and a voice told me ‘Governor General’s Award.’
Britney talked to me there of ‘Whatever’
and we were there together: Britney
loaded and pantyless and the poet struggling
(ka poe kahiko) with a burdensome secret,
which is the same death as Capt. Cook’s
in two feet of water. 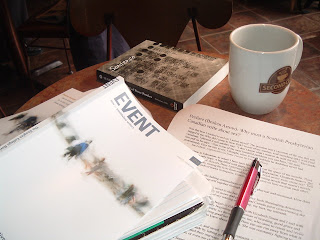 I remember being previously intrigued with the poetry of the mysterious Helen Guri; at least the biographical information at the back of this journal gives me a bit more information than I knew previously, apparently she’s working on a collection of “linked poems about a man who falls in love with a doll,” and earned her MA at the University of Toronto, working with George Elliott Clarke. In her two poems here, “The Cactus” is a stronger poem as a whole, but there are lines in her “Marriage: Late Days” that manage to break me; I want to keep my eye on where this one is going. If you’re out there, Helen Guri, I think you and I should be discussing a potential chapbook, perhaps, for sometime over the next year?

For Ottawa poet Rob Winger, the ghazals he’s been publishing lately (including a couple in the fifth issue of ottawater) have been my favourite of his writing so far [see my review of his first book here], and some of the strongest pieces I’ve seen from anyone in a while.

Ghazal for Retuning John Thompson
The proper response to a poem is another poem.
-- Phyllis Webb

listen, John: of course they didn’t care about poems,
about your hunting knife.

the dykes hold, and birds. here you go: this breeze.
water, water everywhere and not a drop to drink.

last few Wood Point fence posts: brown knots, brown mud.
the tides could sure as hell care less about us.

Sackville burns, a Bridge Street smoke funnel.
your orange ghost in the sewer.

ropes on Hart Hall. corner floorboards. the shot clock, and Tobin.
love is the office you left, filled with theory.

time to split wood, dive deep, surface:
At the edge of the chopiing there are no secrets.

(when the fire’s done,
who holds onto ashes?)

At a recent reading at the Plan 99 series at Ottawa’s Manx Pub, where he opened for Shani Mootoo, Winger read a number of his new ghazals, and nearly apologized for the non-linear, non-logical sense of the pieces, and the form as a whole. I think there is something in the form, and in his poems specifically, that somehow transcends what he has accomplished previously. In his ghazals (I know Winger is deeply influenced by John Thompson’s posthumous Stilt jack collection), he comes to something that the rest of his work hasn’t yet, something magnificent and impossible to describe. I hope he keeps going in this direction. I am very taken with it.

Saskatoon fiction writer J. Jill Robinson is a one I haven’t really spent any time with previously, so I was pleased to read such a compelling piece, “The Letter” being one of the winners of their “creative non-fiction contest,” judged by Vancouver writer Timothy Taylor. Robinson’s is a compelling piece about meeting her grown son for the first time, put up for adoption as a baby when she was still a teen. A number of writers over the years have written on various aspects of adoption, from the birth parent, adoptive parent, and child, including Janice Williamson, Lynn Coady, Susan M. Schultz and Alison Gresik, as well as a couple of anthologies that have appeared lately (I’ve even been working to put one together for Chaudiere Books). The stories that come out are good and bad, heartbreaking and heartwarming, running the emotional gamut that only familial relationships can provide. Fortunately, Robinson’s is one of the fortunate stories. The piece begins with a letter, sent from Robinson to her son as first contact, not knowing what might happen, and moves through a distance of months, to the openings of something new, ending with:

It’s a paradox. David and I have this most intimate of physical bonds, but we do not know each other. We share the briefest of histories, aside from the long, enduring histories of Gordy’s and my families. Our lives have no connective tissue made of the dailiness of life, only that which we are creating now. I often feel lame, at a loss. When we talk the desire stilts our words. At night in bed I am frustrated with myself: I want to know how to be, want to know what my role here is so that I can follow it, but there are no guidelines and I find myself stumbling, and trying too hard. We are better just walking slowly.

By the time we hug each other goodbye I know that David and I will never again be suspended in time. We will remain in motion, stepping forward more than back.