Alberta dispatch: the University of Alberta

A few years ago I read in the transcript of Sheila Watson's preamble to her first public reading from The Double Hook, that Professor Salter had been one of her best editors. That was news, but no surprise. He was no mean scholar, but he didn’t crawl into his speciality and stay there until retirement. His reward for recognizing that a first-rate writer had an office down the hall from him in the U of A Arts Building, was a share in making a beautiful book. The Bard, too, was always somebody's neighbour, somebody's friend. Professor Salter, twenty years too late, I'm ready to listen to you on Shakespeare.
— Stan Dragland, Journeys Through Bookland

In his first editorial to open the year he edited NeWest Review, "My Five Years at The NeWest Review" (Volume 6, No. 1, September, 1980), Monty Reid wrote:

I remember what began. I was a student at the University of Alberta, an unpublished poet, and wondering why there were almost no magazines in Western Canada that interested me, when I found the first issue of NeWest ReView at the bookstore in Hub Mall. What I remember most about the first issue was a short poem by Sid Marty, there in the middle of the front page. It was important to me because it had been given a significant context. The poem reverberated with the sound of the other voices around it; that front page was coming out of the country I lived in.

For years, I've wandered through Edmonton during my annual or semi-annual reading tours and being impressed by the University of Alberta's English (now English and Film Studies) Department. I would usually head through alongside friends, grad students and Edmonton poets Andy Weaver and Adam Dickinson, over to visit Douglas Barbour's office, perhaps, or check out the display case that featured recent literary titles by faculty and students. Why don't all universities have these? It certainly made the department look impressive as a place that helped foster writing, with graduates and faculty over the years including Thomas Wharton, kath macLean, Weaver, Dickinson, Monty Reid, Stephen Scobie, Sheila Watson, Rudy Wiebe, Greg Hollingshead, Kristjana Gunnars, Henry Kreisel, Stan Dragland, and Professor Frederick Salter, for whom the Salter Reading Room is named. If you wander through, you can even see the little desk that used to belong to Sheila Watson, author of The Double Hook. 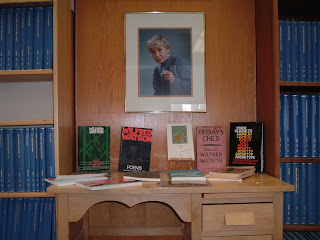 It's hard not to think of the University of Alberta and Sheila Watson as intertwined. The annual Salter Tea in mid-May, held as their annual department awards ceremony, with chairs in a packed space and terrible acoustics. But why would they not have some kind of prominent award named after Watson herself? As though her own presence a particular absence. Writing of Sheila Watson's The Double Hook, and how it has "One of the most famous openings of any Canadian novel," in his collection of essays, Signature Event Cantext (1989), Victoria, British Columbia poet and critic Stephen Scobie writes:

The Double Hook begins with this absence, and then, as Barthes comments, proceeds in its narration (its apocalyptic "unveiling of the truth") to the "staging" of that absent father. Every word of the novel stands in for the word that is not used on the first page. The male characters, especially James and Felix, are advanced (without much conviction) as substitute fathers; the female characters, not least "the old lady" herself, meet and challenge those God-like pretentions. Even, in her case, the God-like pretentions of God Himself […].

The University of Alberta, one of the original points of contention between Edmonton and Calgary, set up against each other now for decades, in everything from white vs. blue collar to competing NHL teams (“the battle for Alberta”), starting out when the province of Alberta was invented. At least, when strips of Athabasca turned into the province of Saskatchewan, the provincial government was smart enough to put the capital in one city, and the university in the other, for the sake of balance, and, dare I say it, fairness. When Alberta was finally invented, far more of the provincial decision-makers were Edmonton-based than were Calgary, so the city was able to take both. How could Calgary not respond? How could the two cities ever get along after? With only the neutral ground of Red Deer to come between them. As Calgary author Aritha van Herk wrote in her Mavericks: An Incorrigible History of Alberta (2001):

Edmonton and Calgary. Two circling huskies, equal in size and clout, 185 miles apart and connected by the north-south ribbon of Highway 2. Books and studies and reports discuss their rivalry, blue collar versus white collar, Redmonton versus Tory-blue Calgary, Oilers versus Flames. Edmonton hosts the legislature, the civil servants, the mandarins of the latest swept-in majority government. Calgary parties with oil men and bankers and corporate head offices, 204 of them, second only to Toronto.

I am writing out these images, this country of roughneck and rocky plains past. Is this simply me, being overcome by my own myths of Edmonton, of wild prose. A local reading series, run by T.L. Cowan and Thea Bowering, calls itself “wild prose country”? Why do I still allow myself to get caught up in the ideas of Kroetsch and van Herk, but not the lyric prose of Kristjana Gunnars, perhaps one of the finest prose stylists to come through this town, and someone who managed to publish at least half a dozen books of fiction, as well as numerous poetry collections? She now sits relatively silent on her British Columbia coast, painting in oil. Gunnars, apparently, only the second person to be hired full-time at the University to teach creative writing; why does she not figure more in my imagination? Why, even with new information, am I so slow to incorporate these into my old and over-worn ideas?

Professor Salter stood perhaps five foot five and had a rather weak chin. He might have looked like the pattern of a henpecked husband when he first walked into the classroom, if it hadn’t been for his smile. I remember his first words: 'Professor Orrell and I just flipped a coin to see who would take which section of Shakespeare. You lost.'

Ah, but the smile. It was another year, my third, before I got to know any of my fellow English majors, with their inside information, so I knew nothing of Professor Salter's reputation. And still that smile instantly told me that he wouldn’t have contradicted anybody who said we'd won. He knew what he was worth, but he never paraded it. Nor did he make anything of the fact that he was lecturing in pain, as we could tell whenever he winced involuntarily through his smile. There was only one allusion to the body that broke down over Christmas, so that Professor Orrell had to add our class to his in the new year: 'If I can carry my Shakespeare to class, surely to goodness you young people can manage to bring yours.'
— Stan Dragland, Journeys Through Bookland

Over the years, the English and Film Studies Department has been a strong example of how a university helps a writing community develop, from the creative writing classes themselves, the hiring of working writers as faculty, and the longest continuing writer-in-residence program left in Canada. My time in Edmonton coincided with the beginnings of a creative writing program at the University of Regina. The University of Ottawa and Carleton University, on the other hand, barely have individual fiction and poetry workshops, proving yet again the bare functionality of a government town, despite the fact that we are the nation’s capital. In the mid-1990s, Ottawa's high tech industry even made public complaints about Carleton getting rid of some of their arts programs, including the language programs. We don’t want to hire automatons, they said. We want potential hirees to be able to think for themselves.

During my time at the University of Alberta, one of the most common questions I got was, what exactly does a writer-in-residence do? Are you required to teach? Those in the system, whether already having done one or just wanting to, seem to have an idea of what the job requires, but most of the time, even folk within the department don’t seem to be entirely clear on what the position means.

My office sat in the English and Film Studies Department, just on the third floor of the Humanities Centre, a building erected in 1972, and decorated with coloured skylights, bright carpets, and fifty-two painted nylon banners by Vancouver artist Takao Tanabe. With each coloured banner 4 x 13 feet in size hanging from the interior ceilings all the way down past the third floor, I noticed quickly just how the light came in through the late morning along the south end of the building, streaming coloured sunlight through the interior, along the office windows of Ph.D. and post-doc alike, possibly too busy to notice it themselves. 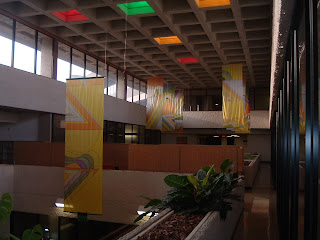 Once head of the art department at the Banff School of Fine Arts, Tanabe was also publisher and designer of a number of early 1960s small press publications, including John Newlove's Grave Sirs (privately printed, 1962) and Elephants, Mothers & Others (Periwinkle Press, 1963), Anne Margaret Angus' Where I Have Been (Periwinkle Press, 1963) and Phyllis Webb's Naked Poems (Periwinkle Press, 1965). The linkage seemed appropriate, then, considering we launched John Newlove's selected poems, A Long Continual Argument: The Selected Poems of John Newlove (2007), in January through the department, mere feet away from his former publisher's artwork. Before they had worked their collaboration, Newlove was part of a "downtown bohemian set" in Vancouver loosely connected with the Vancouver Art School, including the artists Stan Douglas and Roy K. Kiyooka, as well as Tanabe. It was around that time that Newlove, who died in 2003, his last decade my neighbour in Ottawa's Chinatown, wrote "A Letter to Larry Sealey, 1962," published in his collection Moving In Alone (1965):

Buying a pack for the clumsy bag,
zoomed to Edmonton, north, the Hostel, to beds,
to breakfast mush and supper, bummed cigarettes,
sitting dull-eyes day-long in the railway station.
Edmonton. November. Cold. Snow. I am sitting
on the edge of the bed, scribbling on paper towels,
afraid of the ostentation; broke, tired, happy.

The first few weeks, repeatedly telling me how I don’t have to be in there, I don’t have to sit in my office all day, we don’t expect you to come in but three hours a week, but where else would I end up? I’d have to work somewhere. Never office hours but whole office days, and a door that was never closed. What exactly, then, is the function of writer? What does it mean, to write, or even, to write as (seemingly) public function? American writer Joyce Carol Oates who, with her husband Raymond Joseph Smith, founded the Ontario Review during her time at the University of Windsor from 1967 to 1977, at which point they returned to the United States, taking the journal with them. Dorothy Livesay who started Contemporary Verse 2 in 1976 during her two year tenure as writer-in-residence at the University of Manitoba in Winnipeg, 1974-76.

What will they remember of me, if they remember anything at all?
Posted by rob mclennan at 7:12 PM
Labels: Alberta, Aritha van Herk, John Newlove, McLennan Alberta, Monty Reid, Sheila Watson, Stan Dragland, Stephen Scobie, Takao Tanabe, University of Alberta