Some notes: on (finally) staying at Myrna Kostash’s house 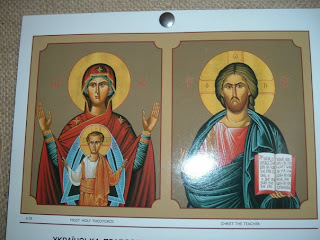 Since Monday afternoon, sitting in downtown Edmonton overlooking the river valley from Myrna Kostash’s book-laden apartment, a two-week writing retreat of sorts. Sitting in the shadows of Byzantine saints. I spend my time at a borrowed laptop, reading back issues of Granta and listening to cds of classical piano, including, the first day, Glenn Gould, Brahms and Beethoven, before moving on to Chopin. The leaves and the brisk air, knowing the wet snow has already started falling in Ottawa. Does it get any better than this? Well, it does, but I won’t go into that. The writer Myrna Kostash is somewhere else, somewhere east for a few weeks. Macedona, doing a series of talks. I leave the same day her sister arrives from Toronto for her own visit, sans Myrna. I sit here in the shadows of Byzantium saints, Byzantium icons, the old world overlapping new. She says my eyes more yellow now, this woman I have returned for; I blame it on the many images of medieval mosaics, each eye a glaring, staring leaf. The Virgin Mary finally turns, and turns away.

Listening to Handel, listening to Haydn, and getting sentimental about the Peanuts cartoon, and Snoopy, specifically; why is it no one remembers that image? Snoopy dancing on the piano, and finally hugging pi

ano player Schroeder, thought-bubbling, “Papa Haydn”? The Edmonton air outside over the river valley smells like paint, it smells like blue; might even be one of the apartments above, or some threat of snow, which apparently Ontario has had in wet waves since I left the airport. How far away is here? Or what The Smiths picked up from Star Wars, “How soon? Is now.” There is so much that I have yet to do.

In Edmonton for one reason only, to reconcile a romantic conflict; how does anything begin? Can I call her “sweet baboo,” referencing Sally? Why is all the love in Peanuts unrequited? Sally for Linus, Lucy for Schroeder, Charlie Brown for that elusive little redheaded girl. Rumours of Marcie’s unrequited love to Peppermint Patti. Caught up in pages of bad prose, trying to work out from under them. Passage upon passage of pining and whining. The North Saskatchewan River like a prairie world-snake, wrapping itself around the residents of this capital city, squeezing sometimes, to remind us its power. How did I get here? And how can I remain? I have given myself up to her theology, the one that concludes in a field of almond skin. Here I am, an Ottawa Valley boy lost in the barrens, lost in the gateway to the north, negotiating the North Saskatchewan River, contemplating the holes in the river valley, the holes in Strathcona and the downtown itself, the holes in my heart, the holes in the shallow sands at t 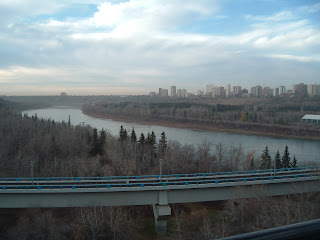 I’ve been thinking about many things over the past few days, over the past week, including just how much the past can crash in on the present, and how much what we want has to be built as much as found. As much as fate, and a luck as much created as realized. I find myself thinking about geography, about the past and the future, about children, the one I already have and the ones that might yet come. On the floor by one of the bookshelves, I find a copy of Fresh Tracks: Writing the Western Landscape (Polestar, 1998), edited by Pamela Banting, and find this in the introduction:

My mother had chosen not to teach me to read before I went to school. She thought that children should have as much pre-literate childhood as possible and she was right in this, as in almost everything else. I had the luxury of a full six years of my life to explore, largely without supervision, the three acres of land (and beyond) on which we were the first white people to live. Our land was adjacent to the Birch river (the town was named after the river, the river after the trees), a creek in which brook and rainbow trout, minnows, crabs and waterbugs could be glimpsed and sometimes caught. Animal paths and Indian trails outlined the river in the same way that we would be instructed in school to outline our colouring. As a preschooler, I set myself the task of retracing and restoring one of the fainter paths through the bush to the river. my only stipulation was that no implement, such as a rake, could be used; I allowed myself to remake the path simply by walking back and forth all day long until it became legible again under my feet.

Going through older issues of Granta, I keep finding memoir pieces by Michael Ignatieff, which by themselves make me think better of the man. Why haven’t I bothered reading him before? Thanks to the poet Gregory Betts, I met Ignatieff at a rally in Toronto during the last Liberal leadership race, tricked by Greg’s brother (who worked on the Toronto campaign) into showing up for drinks with Ignatieff, only to get to a rally where they only served water. I tried to convince Greg and his lovely wife that we should leave, but we didn’t. I should have been impressed enough when he finally shook my hand and thanked me for coming out, and told him, “I didn’t want to be here. He kidnapped me against my will,” pointing at Greg’s brother. Ignatieff laughed, and quickly remarked, “I don’t agree with that, but I’m still glad you’re here.” How can I not be impressed with anyone who comes back that quickly, gracefully? Through various issues I’ve found two pieces so far, including a piece for his mother, “Deficits,” in Granta 27 (Death, 1989), and this one on his father in Granta 14 (Autobiography, 1984), that ends with this:

The lights are out. My parents are both asleep, and our son is in his cot.

We climb up into the field behind the house where the beekeeper has his hives, and where you can see the whole of the Luberon mountains stretched out against the night sky. The shale is cool and the dew is coming down. We watch for satellites and for the night flights to Djibouti, Casablanca and Rome. There are many bright cold stars. A dog barks. In the house, our child floats in his fathomless sleep.

‘Cassiopeia, Ursus Major, Orion’s Belt … I must learn the names, I want to teach him the names.’

Out of the dark, as if from far away, she says, ‘What do you need to name them for?’