WRITING: WHAT MATTERS ; University of Alberta 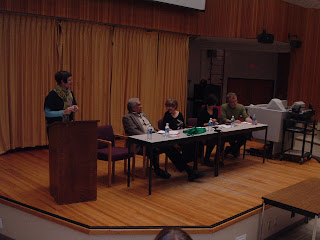 On Thursday, I was able to go to a panel discussion at the University of Alberta called “Writing: What Matters,” chaired by Janice Williamson, with brief talks by Lynn Coady (Writer in Residence, English & Film Studies), Kevin Kerr (Playwright in Residence, Drama), Rita Espeschit (Writer in Exile, Edmonton) and Derek Walcott (Nobel Laureate, Distinguished Visiting Professor, Faculty of Arts). U of A has been pretty lucky to have Walcott around the past little bit, giving talks, being available and otherwise, including even doing a poetry workshop with various writers taking classes throughout the English & Film Studies Department, and he even gave a reading to a packed hall last fall, perhaps but the beginning of this longer-termed arrangement.

Lynn Coady, this year’s writer-in-residence, started her talk referencing how she found it difficult not to take Prime Minister Stephen Harper’s comments against artists personally, suggesting any argument against was “whining” and/or “self-absorbed bullshit,” and suggesting artists aren’t ordinary Canadians, which make their concerns somehow diminished. She talked about writing as her way to address the question of “what matters,” and to “engage the world.” Writing is, she said, what she’s best at doing and like doing most, but how is it that culture at large says its irrelevant? Rita Espeschit, a writer who immigrated to Canada from Brazil in 2001, and the author of fourteen books, talked about how she originally heard that Canada was “like the United States but colder.” She was very pleased and surprised to learn, soon after arriving, that she was wrong (“but not about the colder,” she said). Unlike Coady who read from a pre-prepared speech (call it the writer in her, I would have done the same thing), Espeschit spoke informally of how writing shapes who we are (as Canadians) and is a reflection, showing us to ourselves and to different generations and parts of the country. She wondered if much of this conversation had to do with us having an aggressive neighbour with the same language; when you have an aggressive neighbour with a different language, she said, you have a gate between you. She referenced, too, something Prime Minister Harper said about Canada not having a culture, but a series of regions. Perhaps he should have talked to John Ralston Saul, who recently talked about Canada as a Metis nation, forming ourselves through the fact that we have a range of diversity. Can we simply not see “Canadian culture” because there is no single “one” culture, but a range of cultures? Such ideas become far harder to reduce, and thus grasp onto, by someone willfully working to pay little or no attention. 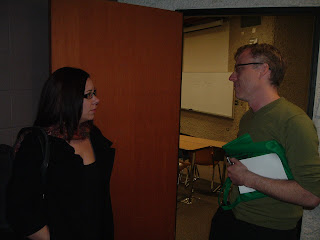 Kevin Kerr [above, talking to Edmonton poet/publisher Trisia Eddy], playwright, who is actually in the second year of a two-year term (I would have loved a two-year term) and husband of poet Marita Dachsel, took another point of view, taking the “what matters” of writing into his own specific process, and talking specifically how he got into the five year project that turned into the play Skydive, currently being performed in Calgary. Worked through with Vancouver’s Realwheels, a theatre company that writes pieces around and with disabilities, this is the second production Kerr has worked on with them. He talked about the idea of the Frankenstein monster, the “spark of life” as metaphor for theatre, with a final production made up of a series of disparate body parts sewn together, searching for that spark that always evades answers, as in, what makes a project work, what makes a project live? Although he made a point to say that the playwright wasn’t the doctor, but perhaps the head, with the actors as arms and legs (he did keep going with the metaphor, but I stopped taking notes after the first bit). 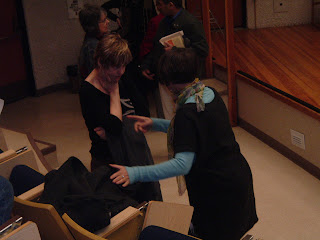 [above: Rita talking with Janice Williamson] Nobel Laureate Derek Walcott, an award-winning poet, playwright and visual artist from St. Lucia (he currently divides his time between New York, Trinidad & Tobago and St. Lucia), started out by saying that, as a Nobel Laureate, he gets asked to talk all around the world, from Mexico to Brazil to Italy, to and with writers, and always about this subject of how and what writing matters. He sees it as a repeated question, where is the centre? He talked about how culture demeans, misunderstands and misrepresents artists through monetary reward as being a mark of success, and that centres such as New York, Paris and London by themselves do not produce great work. Money is not a measure, he said, and he was increasingly disturbed by this, that the notion of craft gets overtaken by career and financial competition. Unlike what the “centre” of what is usually spoken of, his centre is, as he called it, a semi-literature island, and talked about measuring criteria that have nothing to do with the craft. This has been said before, he said, this is not new. He cited examples of obscure geography creating genius away from any idea of “centre,” including Joyce, turning Dublin into a village and he the village explainer, Faulker and Marquez. Who would have thought about the blasphemous hymns, he said of Emily Dickinson, of a spinster recluse out in the country? He ended by saying that the comments made by the Prime Minister were profoundly scary and ridiculous, and about how it is insulting to “ordinary Canadians” that their Prime Minister presumes them not smart enough to engage with it, instead forcing the dumbing down of such works. He ended with these magnificent lines:

Those who presume to speak for the common man demean him.

And then I got lost on the way to the reception, and ended up somewhere else entirely.
Posted by rob mclennan at 8:57 AM
Labels: Derek Walcott, Janice Williamson, John Ralston Saul, Kevin Kerr, Lynn Coady, Marita Dachsel, Rita Espeschit, Trisia Eddy, University of Alberta