Paul Auster’s Man In The Dark 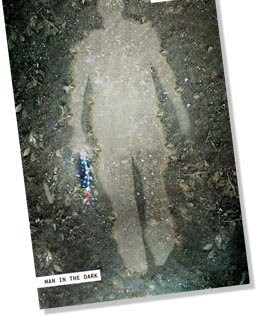 Man In The Dark (New York NY: Henry Holt, 2008), the newest novel by New York City novelist Paul Auster, is a devastating and brilliant novella that begins with the story of a man in a dream, and the man who dreams it. I can’t even tell you how many Paul Auster books I’ve read over the years (including seeing the films Smoke and Lulu on the Bridge, both of which he also wrote), including fiction, non-fiction, memoir and poetry (my favourite for the longest time has been The Book of Illusions). For the longest time, Man In The Dark moves between two opposing threads, of an ordinary man brought into an alternate universe where the United States is in a civil war with innumerable dead, and where 9/11 never happened, who is brought over to kill the author, seventy-two year old August Brill, who is writing the entire story in his head. If you kill the author, the reluctant soldier is told, then none of this will ever have happened.

His friend’s grandmother was born in Berlin in the early twenties, and when the Nazis took power in 1933, her Jewish family reacted in the same way so many others did: they believed that Hitler was nothing more than a passing upstart and made no effort to leave Germany. Even as conditions worsened, they went on hoping for the best and refused to budge. One day, when the grandmother was seventeen or eighteen, her parents received a letter signed by someone claiming to be a captain in the SS. Alec didn’t mention what year it was, but 1938 would be a reasonable assumption, I think, perhaps a little earlier. According to Alec’s friend, the letter read as follows: You don’t know me, but I am well aware of you and your children. I could be court-martialed for writing this, but I feel it is my duty to warn you that you are in great danger. If you don’t act soon, you will all be arrested and sent to a camp. Trust me, this is not idle speculation. I am willing to furnish you with exit visas that will allow you to escape to another country, but in exchange for my help, you must do me one important favor. I have fallen in love with my daughter. I have been watching her for some time now, and although we have never spoken, this love is unconditional. She is the person I have dreamed of all my life, and if this were a different world and we were ruled by different laws, I would propose marriage tomorrow. This is all I am asking: next Wednesday, at ten o’clock in the morning, your daughter will go to the park across the street from your house, sit down on her favorite bench, and stay there for two hours. I promise not to touch her, not to approach her, not to address a single word to her. I will remain hidden for the full two hours. At noon, she can stand up and return to your house. The reason for this request is no doubt evident to you by now. I need to see my darling girl one last time before I lose her forever…

Through his novels, Auster has always been able to bring characters into places they would never have expected, caught in moral and ethical dilemmas, to see exactly what they might end up doing, something he manages to make not only a surprise to the reader, but illuminating as well. Do we live lives made out of the intricacies of fate, or by the deliberate hand of choice? The writer (as many of Auster’s characters are) August Brill dreams his alternate dreams of an America at war with itself, and the darkness that comes out of the further dark, while mourning his late wife, and watching his granddaughter mourn her boyfriend, killed overseas in Iraq. Through being caught between the real story and the invention, is the author perhaps working to cause his own death?

Through the novel, Auster works through story after story, eventually working through, for his granddaughter’s sake, the story of how he met his late wife, and the story of their lives together. Moving through easy dialogue, these exchanges are the strength of an already strong novel.

How long did it take before you saw her again?

Almost a month. The days dragged on, and I couldn’t stop thinking about her. If I had known she was a student at Juilliard, I might have been able to track her down, but I didn’t know anything. She was just a beautiful apparition who had looked into my eyes for a couple of seconds and then vanished. I was convinced I would never see her again. The gods had tricked me, and the girl I was destined to fall in love with, the one person who had been put on this earth to give my life meaning, had been snatched away and thrown into another dimension—an inaccessible place, a place I would never be allowed to enter. I remember writing a long, ridiculous poem about parallel worlds, lost chances, the tragic shittiness of fate. Twenty years old, and I already felt cursed.

But fate was on your side.

Fate, luck, whatever you want to call it.

Very much a post-9/11 novel about America, Man In The Dark is a breathtaking novel that brings together such a dark pastiche that he manages to illuminate the light that sparkles out of it.
Posted by rob mclennan at 2:00 PM
Labels: Henry Holt, Paul Auster