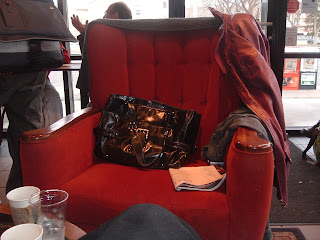 And so I say to poetry: I’m sorry I sometimes get angry with you, or impatient, or that I drop off the radar for five years at a time. I really am in love with you. Honestly, I am. No more disappearing acts, I promise. I’m in it now, for good.
-- Andreae Prozesky, “Falling in Love, with Poetry,” The New Quarterly #108

What the hell is happening in Ottawa now? I go away for two weeks, and everything falls apart...

let down your golden hair

your blue prince will come
In his houndstooth coatyep

you will lie down to the rich
tans of the body

between the cogs of the clock

Run by a group of poets in and around the University of Alberta (the series was originally invented by four U of A grad students, including poets Andy Weaver and Adam Dickinson), what I’ve always found interesting about this series, apart from the publication of the 100 copy monthly chapbook (originally invented to be handout at the reading before any particular author came to town, distributed as promotion, but that has never quite happened) is the range of authors that have come through to read, with previous readers including Christine Stewart, E.D. Blodgett, Jason Christie, Stephen Brockwell, Sharon Thesen, Brea Burton and Jill Hartman, as well as the annual reading by the U of A poetry workshop, many of whom now have their chapbooks appearing on the Olive Reading Series blog.

The mouth is a cairn.
Mouths are also furious. (a rawlings)

For further information on the readings, including rawlings on this coming Tuesday (worth hearing just for her sound poetry, alone), check out their blog here.

Ottawa ON: There’s something fun about reading a chapbook by a younger writer, and seeing direct influence by those I’ve felt around me the past decade or more, reading through Cameron Anstee’s Remember Our Young Bones (Chapbook Series 8.1, In/Words Magazine & Press, Ottawa, 2008), writing centretown Ottawa with references and dedications to, and direct quotes by, John Newlove, Monty Reid and Stephanie Bolster. Something I picked up during the small press book fair that we held during the recent writers festival, the In/Words crew (“brothership,” they were calling it, at one point) has been producing a journal, chapbooks and broadsides out of Carleton University for eight years now, a rotating group of students come through and gone, many of which, unfortunately, I haven’t heard much from since, but hopefully some of this current crew, including Anstee, might be different. How do we keep them writing?

one hundred years
this room before me

frames loosened
attend to the shape

there was more sky once
and different eyes

There is something about his poems that strike, despite the unevenness of many of them, and the maturity that will surely come that reminds of poems but five years ago or so by Ottawa poets such as Marcus McCann, Amanda Earl and Pearl Pirie, who have been very much coming into their own over the past few years. What I like about these poems is that he is so close to “getting it” in so many of them, that I know he is going to. It is just a matter of time. Here are the first two of the six-part “Some Little Poems,” with the mention “after Monty Reid” (referencing the Monty Reid chapbook Six Songs for the Mammoth Steppe, published by above/ground press),:

i. flowers
I carry colours home

waiting to unfold
in small water

and a glass vase
with light now


ii. façade
grass holds
at the edges of stones

Edmonton AB: I recently got a copy of the poetry chapbook Casual Notation of Earth-Shattering Events by Claire Sharpe (2008), produced by Jenna Butler’s Rubicon Press. A Canadian writer who recently returned to the country with an MA in Creative Writing from the University of East Anglia (a school Butler also attended), Sharpe apparently works currently at McClelland & Stewart in Toronto, but doesn’t seem to have published much in Canadian journals (the back of the chapbook mentions Misunderstandings Magazine, echolocation and The Antigonish Review, as well as a number of non-Canadian journals).

It was the landscape that brought us level.
Tramping over soft ground.

It rained and the water rose. It rained
and the ditches held.

And our bodies and our words.
Long grass and low country.

One thing I really admire about Sharpe’s poems is the way she uses her line, just soft enough and present enough to transcend, somehow, beyond the deceptively-ordinary movements she makes. How does she do what she does? In other poems, Sharpe uses the longer line that is almost reminiscent of American poet Juliana Spahr, able to function through length without needing any more nuance than what she already brings to it, without needing the artificiality of constant line-break. There is more than working a line than the simple break, the simple couplet, and Sharpe seems to understand that. But when do we get to see more?

You articulate the bleed from places I find shelter in,

to those I will be bounced from.

A windshield, and shield would break beneath this constant hammering,

these words of yours, this rain.

Light becomes you in liquid openings; my new umbrella,