12 or 20 questions: with Wayde Compton 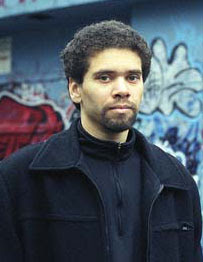 Wayde Compton is a Vancouver writer whose books include 49th Parallel Psalm, Performance Bond and Bluesprint: Black British Columbia Literature and Orature. He and Jason de Couto perform turntable-based sound poetry as a duo called The Contact Zone Crew. Compton is also a co-founding member of the Hogan's Alley Memorial Project, an organization dedicated to preserving the public memory of Vancouver's original black community. (See HAMP's blog here). He is also one of the publisher of Commodore Books. Wayde Compton teaches in Simon Fraser University's Writing and Publishing Program, where is a creative writing intructor in The Writers's Studio; he also teaches English composition and literature at Coquitlam College. He is the Writer-in-Residence at SFU for 2007-8.

I like the idea that Kamau Brathwaite puts forth in his book History of the Voice, that conventions of meter come from specific geographies; that the pentameter is European and does not fit in the Caribbean; that Caribbean poets should develop meters that derive from the hurricane and the tides. Because I am from Vancouver, looking out the window at a rainy and cloudy day gives me a feeling of comfort and normalcy. Things like that probably creep into one’s aesthetics.

The audio poetry that I do, live on turntables and mostly with Jason de Couto, is a creative process. Reading conventionally used to be a bigger part of the process for me than it is now. I think because the turntable-poetry is where I’ve focused all my thinking about performance, I’ve found that the rest of my writing, the stuff that isn’t written for that ongoing project, feels less meant for live reading.

5 - Do you find the process of working with an outside editor difficult or essential (or both)?

I’ve never worked with an editor for a book-length work.

6 - After having published more than a couple of titles over the years, do you find the process of book-making harder or easier?

It’s a stalemate between harder and easier. Some of my skills are better, but my understanding of what I don’t know is also greater.

Anne and I went to Harrison a few weeks ago and we bought some organic pears there.

8 - What is the best piece of advice you've heard (not necessarily given to you directly)?

My friend David Gutteridge gave me some really good advice at a particular point in my writing life. This is not to say that Dave always gives good advice; he sometimes gives really bad advice and then later can’t remember that he did it. For example, he once persuaded me to throw away all my old high school yearbooks. I can’t remember what his argument was, but it was eloquent and convincing, so shortly after this conversation I threw them in the dumpster behind my apartment. Then, a few years after, when we were at his mother’s house, he got out his own high school yearbooks from her closet, and I said, “Hey, you told me to bin all my yearbooks! Why do you still have yours?” And he had completely forgotten that he had convinced me to trash mine, and neither one of us could recall what his point had been back then. So sometimes Dave’s advice is crap. Nevertheless, at a certain point when I was in my early twenties and wanted to be a writer, but was floundering, Dave told me to do more living, to get out and do a lot of interesting things, and then write about those things. It wasn’t that I did interesting things because of this advice, but rather the advice helped me think of myself and my locality as a subject in a new way. It was the right thing to hear at that moment, and it sort of shifted my perspective away from the young writer’s trap of derivativeness.

9 - How easy has it been for you to move between your own work to collaborative pieces? What do you see as the appeal?

Working with Jason de Couto is exhilarating. We plug in all sorts of gizmos: analogue and digital turntables, effects pedals, samplers, et cetera. I love it. We often talk about bringing someone else into the performances to play with visuals the way we play with sound. Collaboration is great. I’d love to build our sound-poetry performances into something even more elaborate.

Whenever I have a spare afternoon, I write at the Vancouver Public Library. I find the commute to a location outside my home frees me up to concentrate on my writing rather than answering emails, the phone, work, and so forth. I have a need to write in complete silence, yet I like to be around people, so the library is the perfect setting. It’s weird, but I like to see people, and know they are they, but I want them to be totally quiet so I can hear my lines as I write them.

I keep more than one project going at any given time, so there is no stalling.

12 - How does your most recent book compare to your previous work? How does it feel different?

My most recent book is a collection of poems whereas my first book was a verse-history.

Music. It’s always changing. Today I was marveling at the production on “Don’t Stop ’Til You Get Enough,” by Michael Jackson. Those insanely grandiose orchestral arrangements of horns and strings all whirling around, and you can see all the musicians in the studio and how much work it took to get those takes, and then it all just gives way after the introduction to a little percussive two note doodle on the guitar. Two notes, but the guitarist wrings complexity out of it with that funk rhythm. There’s a good example of form. Jackson is supposed to have written that, and I guess he came up with the vocal melody, but it’s Quincy Jones’ production that makes it matter. That contrast of scale. A wall of horns and strings and all that breathing and violence, down to a small two note sketch that took no more than lifting and lowering a finger a few millimetres to make it happen.

14 - What would you like to do that you haven't yet done?

I would like to have a few pints of beer at the Railway Club with Hanif Kureishi, Danzy Senna and Smokey Robinson.

15 - If you could pick any other occupation to attempt, what would it be? Or, alternately, what do you think you would have ended up doing had you not been a writer?

16 - What made you write, as opposed to doing something else?

The Epic of Gilgamesh and Tsotsi.

18 - What are you currently working on?