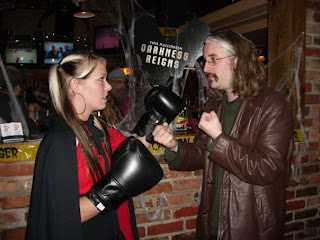 How does one even begin to explain these photographs (courtesy of Jordan Fry)? Let’s just say you missed a damn good small press book fair, and an even better after-party… 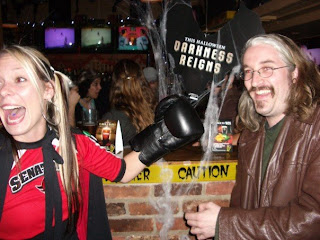 Ottawa ON: Being that he was last year’s winner of the John Newlove Poetry Award (as judged by Erin Mouré), Bywords.ca recently launched Roland Prevost’s first chapbook, Metafizz (Ottawa ON: A Bywords Publication). I’ve been enjoying watching Prevost’s poetry develop over the past two years, watching him engage in that “serious play” of writing poems.

a wasp’s nest, grey paper long abandoned, on embers flashes
after the flames, a silence as empty, flecks spirals up

tomorrow, we’re told, a slight drizzling rain
will ride in on an unusual south-easter

Here’s what Mouré said about Prevost’s prize-winning poem, “at the pizzeria : 100% real juice”: “a poem that makes its references deft and plays in language in a kind of delight, without complicating thoughts on behalf of the reader or steering the reader or telling the reader what to think… which leaves space for the reader to be delighted too. Tis a poem that is fully realized: intention and execution coincide.” [note that Prevost reads at the Sasquatch Reading Series in Ottawa on November 25] 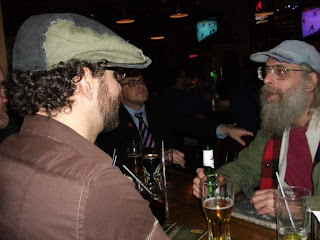 Calgary AB: Now that he lives in Montreal, former Calgarian Colin Martin was able to come visit us during our little fair, and handed me the first three issues of his NōD, fall 2005-spring 2006, produced by the English Literature Student’s Society at the University of Calgary. I’ve only been hearing about this little mag since it was invented, but had never actually seen copies before. An attractive journal, NōD is perfect-bound, and the first three issues include work both text and visual-based by a whole slew of the Calgary crew and beyond, including derek beaulieu, Jonathan Ball, Jordan Nail, kevin mcpherson eckhoff, Monique Fournier, Anne Burke, ryan fitzpatrick, Peter Norman, Louise Bak, Myna Wallin, Daniel Scott Tysdal, Ken Kalman, Aaron Giovannone, Brea Burton, Chris Ewart, Christopher Blais, Christian Bök, Melanie Faith and Lawrence Upton. Some of the visual translations are particularly interesting (but I won’t tell you by who, just to be difficult); NōD provides an interesting intersection with what other publications in Calgary have been doing over the past few years, including that dANDelion and filling Station.

Between Cotton and Candy

Apparently they still exist, and you can even subscribe (or submit); write them c/o ELSS, University of Calgary, Department of English, 2500 University Drive NW, Calgary AB T2T 1N4 or email them at elss@ucalgary.ca

Your smile is deaf sweetly.
May ingenious creativity
sprouting out of your hands
tickle oddly muted lusts and perfect stares.
Milk-tantra brownnose
Circum to a riot of pleasure
Cacophony wriggles
beats to the heart pulling tug-of-war
thoughts. (Danielle Arsenault, issue #2) 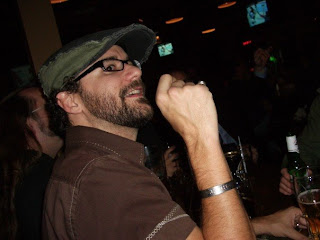 [Colin Martin]
Toronto ON: For some reason, Nathaniel G. Moore came to the ottawa small press book fair in a black cape, fake black fur cap/ears and face painted like a cat. Why, I asked him? Because I’m on vacation, he said. He sold more books than most of us, and handed out two poems, “Sand People, Single File” and “Elegiac Reaction.” [see my review of his poetry collection here; or his 12 or 20 interview]

a mud mask
a flask of hope

someone taps us on the
shore using rustic
love-coloured pebbles

eyelashes, rehabilitate in
the lintless sun, not much to
see out here anyway

I was born here remember
you’re going to die here

embellish the grain, we negotiate
a textured fear, sarlacc because its familiar

fear more than the pit of our stomachs
we do 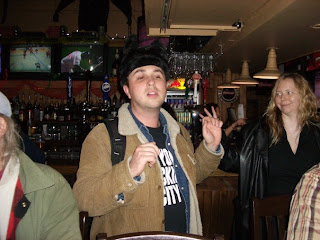 [l-r; jwcurry's shoulder, NG Moore's flailing, Jennifer Mulligan]
Vancouver BC: Pooka Press publisher Warren Fulton made it out to the second ottawa small press book fair in a row, after an absence of over a decade; do you even want to know what he’s been doing since (some of it include chapbooks, broadsides and film production)? Part of what his Pooka has been participating in has been a series of single-page broadsides, produced in an edition of 100 copies; part of what makes the series fun is that he asks for photo booth photos from the author to include as part of it, and he even produces it in full colour! The most recent one I saw was from Amanda Earl [apparently she, as bywords, and Warren are both participating in this weekend’s Toronto Small Press Book Fair].

drinking guinness on a sunday morning 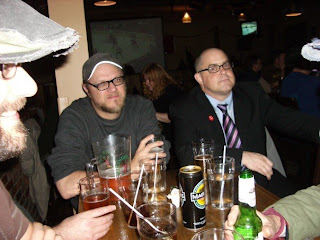