12 or 20 questions: with Steve Venright 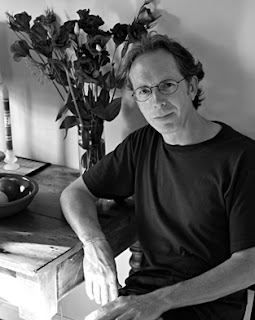 Steve Venright's poetry collections include Spiral Agitator (Coach House Books 2000), Straunge Wunder (Tortoiseshell & Black 1996) and The Sleepy Turbine (LyricalMyrical 2003). His new book Floors of Enduring Beauty is being released in November of 2007 by Mansfield Press. Through his TorporVigil Industries CD label he has released several unique recordings, including Songs of Elsewhere by Samuel Andreyev, The Further Somniloquies of Dion McGregor‹More Outrageous Recordings of the World's Most Renowned Sleeptalker and (in collaboration with Coach House Books) A Natural History of Southwestern Ontario by Christopher Dewdney. As a visual artist, he developed variegraphy, producing psychedelic abstracts using fingerpaint and computers. As founder of Alter Sublime Neurotechnologies, he originated the Hallucinatorium, a travelling retinal sideshow produced by modulated stroboscopic light. Examples of his work, as well as audio selections fromTVI releases, can be found at torporvigil.com.

I swear I'm the same person I was before my meteoric rise to obscurity.

I've lived in Toronto for 25 years, 9 months and 27 days. Geography has affected my writing by introducing me to some remarkable inhabitants of this area. It also means that I'm sometimes subject to meteorological conditions that are less than optimal for writing, but I love this part of the world so I'm not really complaining. During the dozen years when I was working intermittently and sometimes intensively on soundscapes and photographic images for the CD release of Christopher Dewdney's A Natural History of Southwestern Ontario, I spent a lot of time exploring the wonders of the terrain lying between my birthplace of Sarnia and my adoptive home of Toronto. I don't know how it affects my writing but I do feel I'm a product of this region and, in a broader sense, Canada itself. As for the second question, I find it inspiring to inhabit an urban centre whose citizens represent every known race and possibly every known gender.

Both. I'm working on a book from the beginning but don't know what it is until enough of its pieces are written and define the larger project. Where does a poem begin? As far as I can tell, it's the hypothalamus gland, butI'm not sure.

Depends who's reading. If it's me, a reading can be part of the creative process by helping me determine when I'm being honest in my writing and when I'm not. By "honest" I mean oblivious to my own bullshit.

Some of my questions are: What is the nature of reality? What is language? If the world, as Terence McKenna observed, is made of language, how can you use words to change the world? Another current question, addressed only obliquely by my writings, is: When will people stop swallowing the monumental lies that peddle Fascism as Democracy, slaughter as liberation, news as truth, etc.

Editors are essential, whether by helping you shape a work or just prompting you to fine-tune your own critical faculties. I enjoy the intimate mental exercise of working on a text I've created with someone whose sensibilities resonate with my own but who won't hold back from telling me when something's crap.

It's harder than putting a sweater on a dog but easier than dusting venetian blinds with a toothbrush, and that hasn't changed much over the years.

It must have been a couple months ago, the last time I dared to eat a pear. Thanks for reminding me -- it was fantastic! I'm going to go across the street and buy one right now.

Use slip-resistant flooring. Falling with a hot casserole or knife in your hand can have serious consequences. Or do you mean about writing? I often reflect on Henri Michaux's statement that "The mere ambition to create a poem is enough to kill it" -- so much so that I don't even know what it means anymore, but it sounds good!

I think the poetry is more like music while the fiction is more like painting. I find it most comfortable to think of everything I write as just "prose" because it almost always takes that form (though I like being associated with poetic traditions). Writing what might be called "fiction" has a different set of demands, though it's been surprisingly liberating: sort of like being able to re-enter a lucid dream and carry on from where you left off. By the way, the Ontario pears I got from the place across the street aren't ripe enough to eat, so I had some dark chocolate instead.

I used to write at the end of my day, now I prefer the beginning. I find it really difficult to extricate my mind from "the world and all its distractions" (Breton), so I tend to write in any extended way only during those rare stretches when I've freed myself from financial demands and the day-to-day concerns of existence. When I am in a writing phase, solutions to textual impasses frequently come to me as I sleep, sometimes even waking me in the night. Ideally, I tend to work for a few hours or more before getting out of bed. That's when my creative focus and energy seems to be best these days. After breakfast, I might assess what I've done and add a little to it or begin editing. Among the things I've found beneficial to attaining an optimal state for writing are walking, high pressure atmospheric conditions, cranial electro-stimulation, country air (very scarce here in downtownToronto), kinesiology, sensory deprivation, a proximity to fresh water, and being surrounded by the work of others I find inspiring.

When my writing gets stalled, I know that I can turn with confidence to psychedelic drugs. Psychedelic drugs such as Lysergic Acid Diethylamide, Dimethyltryptamine and Psilocybin act fast to dissolve boundaries and expand consciousness, allowing me to conquer even the most stubborn literary ruts with ease! (Just kidding -- actually, I've NEVER taken psychedelics, apart from maybe a couple dozen times. But now that I risk being banned from entering the States -- like Andrew Feldmar (http://thetyee.ca/News/2007/04/23/Feldmar/) -- I might as well say this too: 9/11 was an inside job, Wilhelm Reich was pretty cool and Jesus likes hockey more than football.)

There are more extended narratives in this one, and almost 300 more spoonerisms. Also, it deals in part with homosexual bestiality -- a subject I had not tackled in any of my previous works.

14 - David W. McFadden once said that books come from books, but are there anyother forms that influence your work, whether nature, music, science or visual art?

All of the above have been influences, including the great David W. McFadden himself.

Now, that's getting a little too personal! (Actually, I started writing something about the various brilliant authors I've been fortunate enough to know in my life whose work is important to me and I just couldn't stand the thought of mentioning some and overlooking others. Still, I'll mention threeI met right around the time I moved to Toronto: Christopher Dewdney, Stuart Ross and Nicky Drumbolis.)

Answer the next three questions.

My new book Floors of Enduring Beauty (edited by Stuart Ross) is coming out any day now through Denis De Klerck's Mansfield Press. Another current project I'm excited about is a film based in part on a CD released by my Torpor Vigil Industries label. Pippa Lambert and I had begun to develop ideas for animated documentary based on the incredible recordings of sleeptalker Dion McGregor (getting so far as shooting some interviews in LA and New York), and now the fabulous folks at Markham Street Films [http://www.markhamstreetfilms.com/] have taken on the production. To read the story of Dion McGregor, whose somniloquies were voluminously recorded by his roommate and songwriting partner Michael Barr, you can visit Phil Milstein's Song-Poem Music website or just drop by TorporVigil.com to read liner notes and hear audio samples of McGregor and other TVI recording stars.