[…] a journey of two writers who become lovers who become parents of a special needs daughter. Their experience fumbling toward understanding reveals a medical establishment strangely at odds with understanding.  Their journey unpins the ground beneath them—as diagnosis, as treatment, as daily living, as language—releasing both ferocity and empathy on a scale unimagined by either party. Necessarily hybrid, NOS is a mixed-form narrative about autism and parenting, that’s also a document of trauma. In the extreme present of living a life not otherwise specified, the authors give both voice and shape to the complex journey of a family—not just one child—living with autism. 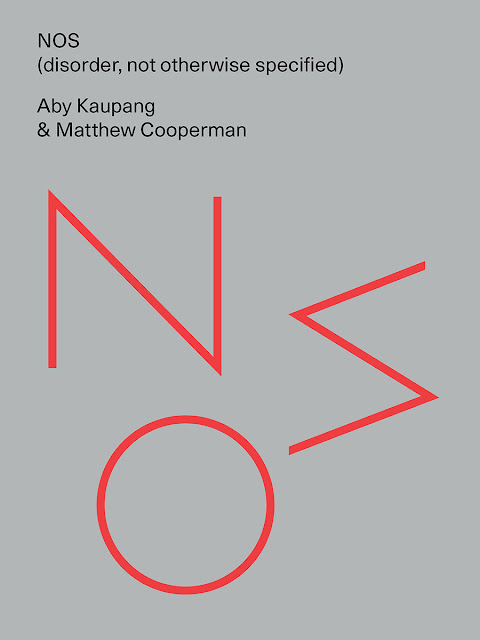 I’m always fascinated by collaborations between writers who are partnered. It doesn’t occur often, but it does happen, and some of the examples I’m aware of would include Sandra Doller and Ben Doller’s prose-work The Yesterday Project (Sidebrow Books, 2016) [see my review of such here], Vancouver poets Daphne Marlatt and Betsy Warland’s Two Women ina Birth (Guernica Editions, 1994), Toronto poets Roo Borson and Kim Maltman’s The Transparence of November/Snow (Quarry Press, 1985) and Victoria, British Columbia poets Patrick Lane and Lorna Crozier’s No Longer Two People (Turnstone Press, 1979). There was also Robert Kroetsch’s volume of poem/journal entries, Letters to Salonika (Grand Union Press, 1983), less a collaboration than a response to his then-wife, Smaro Kamboureli, during the period she was in Greece composing her own journal, in the second person (Longspoon, 1985). Really, the poetic collaboration is best when it really comprehends that the goal is to write out and into that theoretical space between the two individuals, and partners writing in response to each other becomes the perfect metaphor for that imagined and imaginary combined third.

A THEORY OF CAUSATION

Inappropriate medication occurs when a patient takes unnecessary or excessive medications. One becomes many in the pluraling of pills. This may happen because the prescriber is unaware of other medications the patient is already taking, or enthusiasm, or an undiagnosed condition. Sometimes the extra prescription is intentional. Sometimes is a theory of consumption. There is a vocabulary in solubility as there are consumers waiting to be filled. One wants facts in the god-doctor world. Additional accumulations occur as snow in the darkness of a child.

Along those lines, the collaborative NOS (disorder, not otherwise specified) is comparable to the Doller’s project, in that both projects include a pair responding in tandem, and in response to each other, to something further. In the case of NOS, it is their shared parenting of a child with autism. As they write: “What is there to say of this child? She lived, lies through this. So did we. You want to know more about her. So do we.” Working from medical records as well as their own experiences, NOS explores the joys and anxieties of parenting a special-needs child, as well as the frustrations of a medical system not properly equipped to assist at the level required. Constructed via lyric and prose fragments with accompanying images, graphs, forms and sketches, NOS works through some difficult, albeit shared, territory with openness, candor, grace. The book is built as an accumulation of poems and sketches collected over a single period, as opposed to having any particular narrative through-line, something that provides a particular anxiety or unsettledness to the project, one entirely appropriate to such a subject matter. This is very much a book composed by two writers as they negotiate and process the experiences that come with being the co-parents of a daughter with autism. Given they are both writers, how else would you think they should respond? The bonus, at least for this, is that they are able to process such together, even as the text provides the occasional, and fascinating, pull between the two voices:

MOC: Matthew feels that to use one’s daughter as a “poetic” subject is taboo. Forgive me then for publicly processing. I embarrass.

Speaking from experience, barely & newly, I pen out my exhaustions, my endless angers.